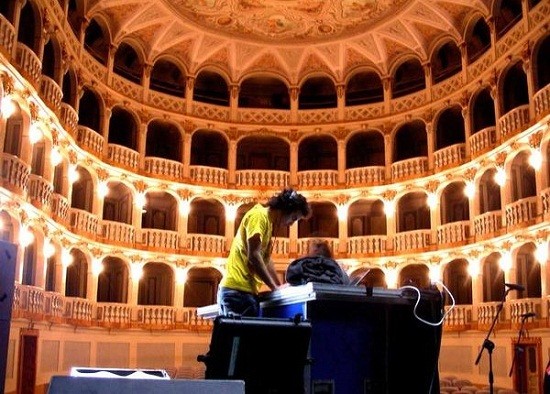 Last week, Kieran Hebden from Four Tet announced a new single entitled "The Track I've Been Playing That People Keep Asking About and That Joy Used in His RA Mix and Daphni Played on Boiler Room." It's an okay track with an awful title, but you have to give Hebden props for taking the plunge. Here are the six best songs with ridiculously long names, a list that requires a few more disclaimers than most. First, songs must contain at least ten words. Second, parenthetical extensions and songs with double titles are discounted. Finally, the songs themselves are judged rather than just the titles. Let us know your favorites, briefly, in the comments below.

6. Maserati: "This Is A Sight We Had One Day From The High Mountain"

Since Athens, Georgia's Maserati is most often labeled a post-rock band, a twelve-word title such as "This Is A Sight We Had One Day From The High Mountain" may conjure twinkly guitars and an inevitable inspirational climax. Nope. This track is a steamrolling dirge with psychedelic flourishes, like Sabbath playing krautrock. The band's 2008 album Inventions For The New Season features now deceased drummer Jerry Fuchs, and "This Is A Sight..." is built around his slowed down tracks - presumably assembled while Fuchs was touring as a hired gun for !!! and/or LCD Soundsystem. At normal speed, Fuchs put an unmistakable spring in Maserati's steps. Now Mike Albanese from Cinemechanica has taken his throne, and I can't wait for a math-rock powerhouse drummer to make neo-hippy asses shake when Maserati opens for Sound Tribe Sector 9 at The Pageant in March.

5. Microstoria/UI: "Run? I Jolly Well Won't Run. I'll Be Happy To Get You Chaps Another Ball"

Microstoria was a project of Oval's Markus Popp and Mouse On Mars' Jan St. Werner, who made ambient electronic music with a strong focus on improvisation. The duo's best work was 1997's Reprovisers, which was somewhere between a remix record and a curated mixtape of like-minded artists like Stereolab and Jim O'Rourke. A highlight - and the longest title, coming in at fifteen words - is "Run? I Jolly Well Won't Run. I'll Be Happy To Get You Chaps Another Ball" by UI, a proto-post-rock group from New York that featured the indie-famous music critic Sasha Frere-Jones. Like most of Microstoria's music, "Run?" rewards the most patient among us. Small victories include the upright bass at 5:49 and the glitchy Casio beat on the track's final movement. If you dig, Oval's "Microstoria Runtime Engine" from the same album is a solid next move.

4. Sufjan Stevens - "They Are Night Zombies!! They Are Neighbors!! They Have Come Back from the Dead!! Ahhhh!"

This is not the longest song name on Sufjan Stevens' excessive-in-every-way Illinois record, but it has the highest quality to length ratio. It's "The Zombie Song" on the album, and it predated the zombie apocalypse trend by a handful of years. It's also oddly funky, especially since it keeps Stevens' organic aesthetic intact unlike the electro question marks of The Age Of Adze.

2. Don Caballero - "A Lot Of People Tell Me I Have A Fake British Accent"

Listening back to Don Caballero's 2000 album American Don, I remember why Minus The Bear had such a stigma to overcome. MTB's first albums relied on two of Don Cab's most distinctive devices: clean guitar tapping and ridiculous song titles. "A Lot Of People Tell Me I Have A Fake British Accent" is the band's most well-named song because it's not necessarily funny. The humor is in the fact that the title was chosen, not in the actual words. Sure, Don Caballero did not invent the unrelated wacky-long title, but it seems that modern names like "Our Lawyer Made Us Change the Name of This Song So We Wouldn't Get Sued" by Fall Out Boy can be traced back to these folks. Oh, and this is also a great track, and you can hear hints of the territories guitarist Ian Williams was headed with Battles.