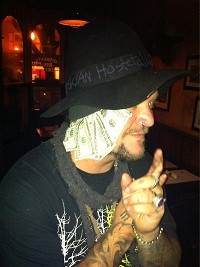 By now, everyone knows the history. He started out as just a skater kid with a video camera, but Bam Margera's outrageous antics and skate videos eventually became his livelihood. Cult releases like the CKY series earned him the attention of Big Brother editor Jeff Tremaine, and pro-skateboarder Margera and his cast of characters eventually went on to produce MTV's Jackass, the popular early '00s reality show of stunts and pranks.

Fame was short-lived, and troubles with drugs, alcohol and bad decisionmaking seemed to visit nearly every member of the cast. When your whole job is being controversial, these things happen, and many of the Jackass characters are now navigating a post mega-success world.

Jackass host Johnny Knoxville explored acting (including a costaring role in the latest Dukes of Hazzard incarnation). Stunt king Steve-O spent years in a cocaine-centered downward spiral before getting clean. (He might still be insane, but now he's proudly sober.) "Party boy" Chris Pontius was also rumored to have survived drug problems and resident little person, Jason "Wee Man" Acuna, seems to have escaped addiction and is currently exploring acting. Sadly, Ryan Dunn died in a high-speed drunk-driving accident in 2011.

But Bam Margera? He's just kind of been floating between obscurity and bad decisions. He's had a series of unsuccessful marriages, has a long history of trashing hotel rooms, has police-documented days-long alcohol benders and is generally known for being a steaming hot mess.

These assumptions about his out-of-control lifestyle are something that he encourages, though, as evidenced in his new music video. He seems to do anything for negative attention, including releasing this video for his new (joke?) rap song "Bend My Dick to My Ass."

The video is full of played-out Bam-isms (drinking his own urine, flaunting his current topless hottie), but it's good for a laugh, I guess. It's just getting harder and harder to tell if you are laughing with Margera or at him.

Check it out for yourself on the next page -- but know that it is way more than just a little NSFW.

VIEW WITH CAUTION: The video contains varying degrees of nudity, offensive scenes and language. And so again, it is way, way hella NSFW. You've been warned.

See Also: -Crotching Whiskey at the Justin Bieber Concert and Getting Thrown Out: A Review -The 15 Most Ridiculous Band Promo Photos -Who the Hell Cares if Beyonce Lip-Synced the National Anthem at the Inauguration?