Win Tickets to Yo La Tengo and Calexico at the Pageant 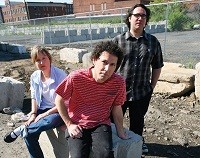 Yo La Tengo is coming to the Pageant on Thursday, January 31, and we have a pair of tickets right here at RFT Music headquarters! The band will be joined on stage by New Orleans Americana sextet Calexico. Die-hard music nerds and record store clerks all over town can barely contain their excitement.

To win, use the Spanish language to create a band name (for example, "Yo la tengo" is Spanish for "I have it"). That's it! Be creative. The use of an online translator is perfectly fair. We will pick a winner by 5 p.m. on Wednesday. You may enter in the comments or on our Facebook or Twitter pages, links to which you can find below -- make sure you include some way of contacting you.

RFT Music writer Ryan Wasoba had this to say about the show in our print critic's picks this week:

Yo La Tengo's shows are consistently full of "You should have been there" moments. The band previously performed a live score to a nature documentary at Webster University and put on a variety show at the Gargoyle with Tortoise's Doug McComb on guitar and comedian Todd Barry on percussion. During the Hoboken trio's last "conventional" show at the Pageant, the band broke into a five minute noise explosion midway through a Beach Boys cover. Guessing what surprises lie in Yo La Tengo's bottomless bag of tricks this round is futile; this 28-year-old band is more spontaneous than most bands of 28-year-olds.

Check out Yo La Tengo's song "Ohm" from the band's latest album Fade: