The Best Part About The Mars Volta Was Their Hair 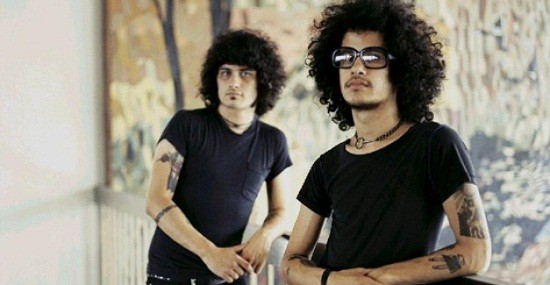 The Mars Volta was a rock band from Texas [not California - Thanks Matt!] [<----See? Thanks Jess!], which is a place where bands are frequently formed. Other bands formed in Texas include the Toadies, Los Lonely Boys and the band that spawned the Mars Volta, At The Drive-In. At The Drive-In is best known for once having a song on MTV for a short period of time. It was called "One Armed Scissor" and it took the world by storm with the force of any song by Yellowcard or even Fountains of Wayne.

I've been sitting here trying to find an eloquent way to explain the impact of this band on the music industry, and the impact that this break-up will have on it, but there's no way to mince words - the best part about the Mars Volta was probably their hair. Fairly bushy and kind of ratty-looking, it set the band apart and set a standard that the band itself could not prove equal to. Still, these brave men with hyphenated last names wore vests, belted out high-pitched vocals and played guitar kind of fast and with a lot of delay - all while armed to the teeth with vocalist Cedric Bixler-Zavala's dizzying lyrics:

Jesus. I thought I was going to have to edit together 100 lines from each of their songs to illustrate what I mean, but what do you know, the very first song on the band's very first EP seems to do the trick. Commenting on the band's break-up, our modern-day T.S. Eliot said something on Twitter that's similarly stupid and abstract:

It doesn't make a ton of sense, even placed in context, but Cedric Bixler-Zavala is referring to Omar Rodriguez-Lopez and his new band, Bosnian Rainbows - a name that makes you wonder if Rodriguez-Lopez was actually the true author of the band's cumbersome lyrics.

Anyway, The Mars Volta are gone now and have taken their bitchin' hair and all of their overblown whatever-the-fuck-that-was with them. If you honestly feel a deep loss, go back to high-school and take drugs until you discover King Crimson, Brand X, Weather Report, Mahavishnu Orchestra, Gong and the flood of other incredible progressive groups of the '70s. In the meantime, take solace in the fact that Coldplay will probably never break up, so you'll still have a place to go when you want to spend 30 bucks on a t-shirt. Too bad Coldplay's hair sucks..