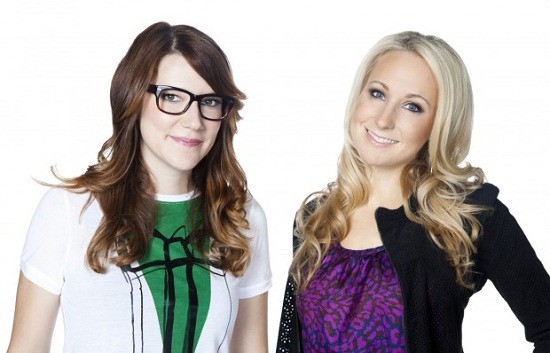 Now that you're done making the same tired objection that your uncle made ten years ago, maybe it's time you give the wayward TV station a little credit for at least getting back into the comedy business.

See also: -Nationally-Renowned Funnyman Tommy Johnagin Comes Home to St. Louis, Fresh Off of Appearances on Letterman and Conan -Stand-Up Comedy: It's Like Rock & Roll but with More Assholes

The pair already host an extremely popular weekly podcast You Had To Be There. You might have heard that or caught them as they criss-crossed the country performing in the past twelve months making stops in St. Louis. Nikki performed at places like the Westport Funny Bone, the Too Hip (For A Comedy Club) Hilarious Showcase Spectacular at Foam and The Firebird. Sara headlined at Foam.

Nikki took a few precious minutes away from standing on the edge of mega-celebrity Monday to answer a handful of questions for her adoring hometown public. She'll talk about working at MTV and make a startling revelation about a seemingly empty vessel. I'll put my foot in my mouth and insult her father.

[Disclosure: Nikki gave me permission to refer to her as a "pal." I'm not a guest on the first show, so, I really don't see it. Actually, we've performed together a few times and get along perfectly well despite the contentious nature of the interview.]

Kris Wernowsky: Most of us don't have a late-night cable television talk show. Now that you are just days away, can you explain what these last few hours before going live feel like?

It feels like sitting in a chair and getting your hair and makeup done. I do that for two hours before putting on a mic and walking to the studio. Maybe I'll sit there with Sara and go over the script, but mostly I'll just try to keep the conversation as light as possible. I'll ask my makeup guy about his love life or something. Before a big show of any kind, I like to just act as normal as possible. There's no point to get nervous. It doesn't help me perform at my best so I try to delay that feeling for as long as possible.

MTV has a rich history of comedy. Most of us remember seeing Dennis Leary, Colin Quinn and Adam Sandler on Remote Control or Mario Joyner hosting the Half-Hour Comedy Hour. You're even taking over a time-slot once held by Jon Stewart. Also, let's not forget its history of unintentional comedy (Alternative Nation, late Real Worlds, teen moms). Now that the network is seemingly entering a new phase of comedy, do you feel any sense of responsibility to its past?

No. MTV looks nothing like it did in the '90s. It doesn't even look like what it looked like five years ago. My only responsibility is to be as funny and genuine as possible. I'll just want to do the best I can for myself. And believe me, that bar is high.

Your first guest is Ke$ha. Do you plan to contribute to her tooth-based wardrobe, or will that make you un-TV friendly?

This is a pretty silly question that I don't feel like answering with more than a simple "no." But I am very excited to meet her. Her whole new album was done without an ounce of auto-tune. She is a talent that I can't wait to touch.

Your show is shot in the old TRL studio. Have you come across any pitiful remnants of what, for many, was a very sad and dark time in American music history?

I work at the Viacom building and one day I discovered an old Late World with Zach [Galifianakis] ball cap in one of the kitchens areas. I treasure it.

Be honest, what is something that has happened to you in the course of developing this television show that has just shocked the ever-loving shit out of you?

Say I'm one of the eight people in the nation with cable television. How would you describe your show to me in a way that would make me want sign my life away to Charter Communications or any number of horrific cable providers?

C'mon, Kris. Are you really telling me that only eight people are going to be watching my show? That's not very nice. Also, my dad worked for Charter Communications for nearly 20 years, and so I do not support your statement! Watch my show because it is funny,

Assholes like the recently-deceased Christopher Hitchens have curious opinions about women and their place in comedy. Do Sara and you feel any additional pressure of being two hilarious lady-folk launching a high-profile comedy show in an increasingly less male-dominated business?

I feel no pressure being a woman. If anything, I feel the need to uphold the high standard of comedy that so many funny women have set before me.

You used to talk about living with your parents in your act. Are they coming to watch your first show or are they just glad you're not in Kirkwood eating their Captain Crunch and drinking all of their whiskey?

I never drank their whiskey, but my mom surely didn't care for the fact that I could polish off a twelve pack of her Diet Coke in a weekend. They are not coming to the premiere episode. I forbid them. Just kidding. They will be at a future taping. We are doing at least twelve episodes, so we have time. They are actually throwing a big viewing party at their house in St. Louis the night of the first show. You aren't invited because of what you said about Charter.

I'm sure you've told the story 80 times, but let's pretend I'm not lazy. How did you and Sara meet? Could you also describe how the podcast came about?

We met at a party. We were both digging into a fresh batch of hummus that the host just put out. We started chatting about podcasts. Then one of us jokingly suggested we start one together. Then we stopped laughing and realized we were both dead serious. The rest is HERstory! Get it? We're women, Kris. [Author's note: I had no idea.]

If you could have one guest on your show, barring history, time, etc., who would you like to have sitting in your studio? (Please note that you can't say Justin Timberlake)

Zac Efron. Someone told me that they read an interview with Chelsea Handler about how she meets men and she said "I book them on my show." I intend to do the same. She's brilliant.

Now that you're all famous and shit, can you give an honest assessment of the scene you've left behind in St. Louis? Tommy Johnigan's gone. Greg Warren's gone. What sort of things are you seeing that are great? What does this city need to do to get noticed?

I haven't been a part of the St Louis scene since October of 2010 when my friend and comedian, Keith Cissel was in a major car accident. It happened the night before I moved. I now come back for holidays, and I see that the scene has become much less cliquey than it had been in the past. I don't know if Keith's accident made us all appreciate one another more and become less judgmental and jaded, but it certainly did something. Comedians at every level are more nurturing and friendly toward each other. There is a true camaraderie there now. I dig it.

And despite the exodus of Greg, Tommy and myself, I think that St. Louis is brimming with talent. I know that there are a ton of guys (and galz) who I don't know who are up-and-coming and killing it, but some of my favorite local guys are Josh Arnold, Sean O'Brien, Joe Murray, Bobby Jaycox, and (for better or worse) Mike Strantz. Andi Smith is also a comedian in St. Louis.