The Ten Best Shows in St. Louis This Weekend: January 25 to 27 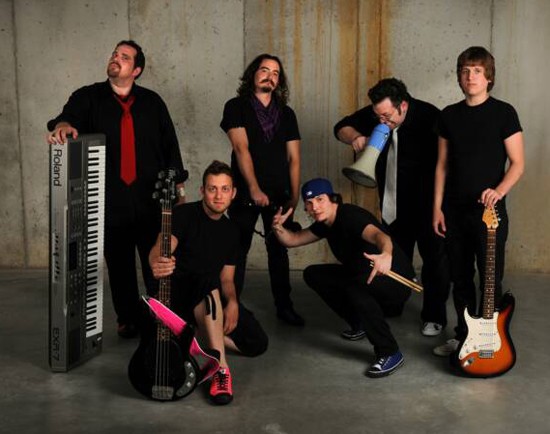 If I had a quarter for every Jell-O shot I've been offered since I started this job, I'd probably have enough change to get a couple beers out of the boozy vending machine downstairs. I've never been much of a lush, but it just seems un-American to turn down a dessert with such high regard from the great sweatered Bill Cosby.

With all the complimentary edibles that've been floating around here, my mid-section's starting to get a little jiggly itself. Or, as I like to look at it (I see myself as a glass half full kinda girl -- of what I couldn't say), I'll have plenty of lard to stay insulated while venturing out to check out some shows this weekend.

The Billiken Club begins to make its comeback with a KSLU Website Launch Party featuring a local line-up at Plush. Off Broadway hosts a Tony Perolio Benefit Concert to drum up support for Leukemia research. A couple of two-day fests overload the senses this weekend -- the Dudes Magazine release and anniversary party as well as InFesT STL, a new series of local indoor showcases at 2720 Cherokee. Click on the links to learn more -- you will not see them below. There is just too much stuff going on this weekend.

JT Woodruff w/ Mark Rose, Carte De Visite, We Should Leave This Tree @ Lemp Neighborhood Arts Center 8 p.m. | $7 This show features the solo work of the leading men of Hawthorne Heights and Spitalfield. If those were your jams in the in the early '00s, get all nostalgic-like during this intimate Friday night. (MS)

Mac Lethal w/ Farout, Baytron, Trak Masta Tom @ 2720 Cherokee 9 p.m. | $10/$15 Mac Lethal made a name for himself with viral youtube videos and a lightning-quick tongue. This video is my favorite. (DH)

Paul van Dyk w/ Rob Lemon, SlantE @ Europe Nightclub Paul Van Dyk is widely regarded as one of the top ten DJs in the entire world. The German-born EDM producer has landed on lists saying so every year since 1998. He even won a Grammy for his work on the soundtrack for The Dark Knight. (DH)

Inspectah Deck w/ Colt Seavers, Kold Kace, Brief, 12 to 6 Movement @ Fubar 7:30 p.m. | $15-$20 Even more Wu-Tang! This is the second appearance by Inspectah Deck in the last couple months; Method Man was here a couple of weeks ago and I've even heard rumblings that Raekwon may be coming back soon. (DH)

Scott H. Biram w/ Tuff Tits, Fat Tramp Food Stamp 9 p.m. | $12-$15 Scott H. Biram, aka The Dirty Old One Man Band, has been covered by the likes of Nashville Pussy and Hank Williams III in his time. Biram doesn't need a backing band; he can do it all himself.(DH)

Sponge w/ The Difference Engine, Jetliner Gypsies @ Cicero's 8:30 p.m. | $17/$20 "...Sponge has been on the reinvention track for quite a while, shuffling band lineups and experimenting with poppier sounds instead of its trademark distorted guitar and vocals." (Allison Babka)