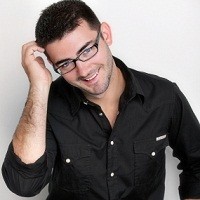 Most entertainers can point to a few unique moments in their careers where in a matter of minutes, things changed. These brief moments reshape an entire career, a life -- and if a few things click, an entire generation of fans. When tracking the career trajectory of comedian Tommy Johnagin, these unique moments can start to seem like everyday occurrences. This past year Johnagin made his fifth appearance on Late Night with David Letterman and his second appearance on Conan O'Brien, only adding to already extensive TV resume that includes finishing in second place on the seventh season of NBC's Last Comic Standing. His acclaimed stand-up act brings him back home to St. Louis, to what he considers his "home comedy club," the Westport Funnybone, this Thursday through Saturday (Jan 24th-26th).

See also: -Colorado Comedian Ben Roy's Rise and What St. Louis Can Learn From It -Stand-Up Comedy: It's Like Rock & Roll but with More Assholes -Comedians Are The New Rock Stars

Along with the national recognition Johnagin's talent on stage has brought him, he's a favorite to anyone who's been a part of the St. Louis stand-up scene for the last few years. As one local comic told me, "You assume when Tommy comes back to St. Louis, he's probably going to have about 37 new bits he didn't have last time."

Hard work and a keen ability to see the humor in whatever cards life deals him have served Johnagin well, and recently life has been dealing him the cards of change. He moved from St. Louis to Los Angeles. He then moved in with his girlfriend, and the couple shortly thereafter discovered that they were pregnant. Upon hearing the life-altering news, instead of panicking Johnagin thought, "This whole situation I'm living in would make a great TV show!" The executives at NBC agreed with him, and after hearing the idea they agreed to start developing a TV show based on Tommy's life and stand-up act. That's one life-altering event potentially turning into another one.

Johnagin considers coming home to St. Louis as another life-altering event --particularly to his waistline -- on account of all the good food. He explains, "I put on about fifteen pounds every time I spend a week in St. Louis." I asked him to give us five things he misses the most about our city, including some the food choices he still remains fond of.

1. The Cardinals- (well of course) Realizing this current week at The Funnybone will not take place during the Cards baseball season, Tommy mental-noted that his agent deserves to be reprimanded. 2. Pappy's Smokehouse. In the words of Johnagin, "the best barbeque in the country by far." He likes it so much he claims that one of the main reasons he moved to LA was to become famous enough to be considered for one the autographed menus on the wall at Pappy's. 3. Bridge Tap House and Wine Bar / Rooster Café both located downtown on Locust. These are simple choices for Tommy. Bridge has the most beer in one location of any where he has ever been and the Rooster Scramble holds a special place in his heart. 4. Ted Drewes / Crown Candy. Johnagin likes to take them both in to satisfy his sweet tooth. Anything that combines brownies and chocolate and he's in, reportedly. 5. Brennan's- Great place to smoke a cigar and the best vibe around. All-around great place to hang out.