Chuck Berry Given Lifetime Achievement Award: "It's Beyond My Dreams to be Here this Long, Really." 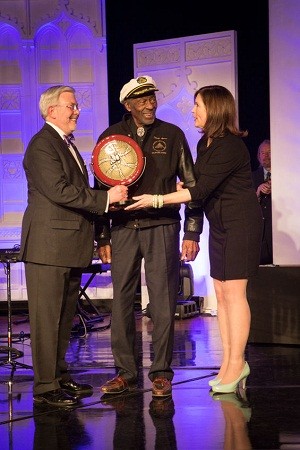 UPDATE: The Arts Council just uploaded the video that was played last night in Chuck Berry's honor. See it on the second page of this post.

Last night the Arts and Education Council kicked off its 50th anniversary year with a ceremony to honor various contributors to arts and culture in St. Louis. The event was held in the beautiful Chase Park Plaza ballroom with a whole big ceiling full of modern sputnik chandeliers. The floor was filled with tables set for dinner and there were large screens flanking the stage with clear graphics and a high-quality feed of what was happening on the stage.

It was clearly a rich people event (with tons of gorgeous quilted Chanel purses in attendance), but it wasn't stuffy. These are rich people who are supporters of the arts, after all. The hosts of the evening manged to be warm and light-hearted while still stressing the importance of arts and art education. They presented a brief history of St. Louis and the arts, commemorating the opening of the Fox and the Black Rep, the founding of COCA and the recent renovation of the public library downtown, among others.

The gravity of this ceremony being held on Martin Luther King, Jr. Day was not lost on anyone in the room, least of all the organizers. They took a minute to honor Dr. King at the very beginning of the ceremony, even before thanking their sponsors. Classy.

After the initial formalities and with apologies to the other honorees, announcer and Fox2 news anchor Kevin Steincross acknowledged that Berry was the true star of the event and the Chuck portion of the night began. Steincross introduced a video that included many knowledgeable talking heads, including Berry bestie Joe Edwards, who explained Berry's cultural significance and historical role in bringing all people and races together with the power of music. 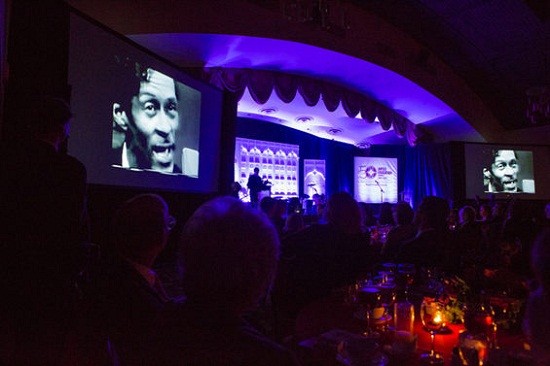 As the video closed, Berry was called onstage to thunderous applause. A few minutes before he was just a regular guy who seemed way into eating his steak, but if you give Berry a microphone an stage, he comes alive. His charm and charisma are irresistible, and it's impossible not to smile if he's smiling.

As the applause faded, Berry stood behind the podium, looked out on the audience, flashed that contagious smile and then kicked out his leg and made an exclamatory noise that can only be described as the sound made by Charlie the Unicorn.

His acceptance speech was bittersweet and very, very short ("It's beyond my dreams to be here this long, really."), but he's Chuck fucking Berry, he can do what he wants and we will gladly take whatever he chooses to give us. 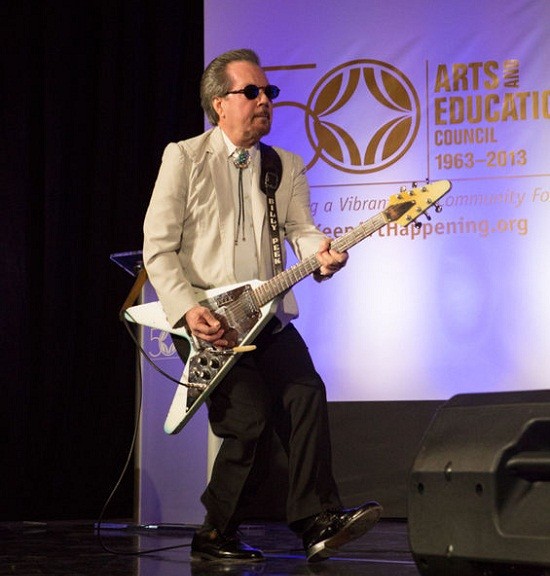 Following the award presentation, legendary St. Louis blues guitarist Billy Peek led a band in a performance of Berry's best-known songs. Peek has an impressive musical history, including touring with Berry. (And he's a dude from the South Side, so we will forgive him for his involvement with Rod Stewart.) Peek played inspired renditions of "Maybellene," "Roll Over Beethoven," "Sweet Little Sixteen" and "Johnny B. Goode." He even imitated Berry's signature stage moves, including the Duck Walk. (And who was Peek's bass player? He was phenomenal.)

During the performance, many audience members stood up at their tables and commenced to boogie, proving that not only are Berry's songs irresistible even when performed by others, but that offering a free cocktail hour before any event is always a good idea. It's safe to say that good times were had by all.

St. Louis is a weird and magical place, but sometimes our collective inferiority complex is silly to the point of being obnoxious. St. Louis is strong and interesting and thriving, just ask the Arts and Education Council. And if anyone steps to your civic pride with claims of lack of culture or significance, just remind them that we made Chuck Berry, goddammit, and he made rock and roll. Argument won.