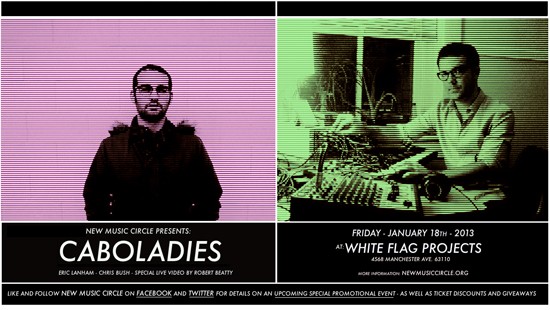 Stemming back to its foundation in 1959, the St. Louis-based New Music Circle has moved forward as torchbearer in the curation of both regional and international innovators of avant-garde music. Embracing everything from modular synthesis and experimental turntablism to free improvisation and tape manipulation, the NMC extinguishes derogatory blanket labels such as "noise" and "free jazz;" offering unique performances nothing short of sublime. Responsible for bringing acts like Tony Conrad, Morton Subotnick, The Golden Quartet, and Keith Fullerton Whitman to St. Louis over the years, the NMC continues to push boundaries across the sonic spectrum with efforts by the organization and their Program Coordinator, Jeremy Kannapell. This season the NMC has teamed up with like-minded venues like the Luminary Center for the Arts, Contemporary Art Museum, and White Flag Projects to present St. Louis spectators with performances from a quintet led by NYC pianist Kris Davis, a trio led by Danish improv saxophonist Lotte Anker, and the introduction of a film program curated by the Los Angeles-based art-film archive, Center For Visual Music.

This Friday marks the first concert of the 2013 portion of the NMC's 54th season with a special performance from electronic duo, Caboladies accompanied with visuals from artist Robert Beatty at White Flag Projects. Since 2006, the Lexington/Chicago duo comprised of Chris Bush and Eric Lanham have created a compelling study of panning sound and texture through their collaborative efforts and in solo work as Flower Man and Carl Calm, respectively. Through command of synthesizers and samplers, Caboladies exhibit a powerful yet subtle diligence in the world of abstract sound, leading the NMC's program as some the youngest performers this season.

In tandem with Friday's performance at White Flag Projects, the NMC and Apop Records team up to present a collaboration between Beatty and bassist Darin Gray (On Fillmore, Grand Ulena) on Thursday for a free live in-store event at 7:30pm. Serving as a founding member of noise stalwarts Hair Police, Beatty is no stranger to the world of experimental sound, having collaborated with acts like Burning Star Core and created solo output as Three Legged Race.

As always, the NMC will close out the 2013 portion of its season with a celebration and local showcase at the William A. Kerr Foundation. Leading the event is local chamber music ensemble, Trinity Piano Trio, who will be interpreting and performing works by Sun Ra in conjunction with what would be the late jazz composer's 99th birthday.

In anticipation of the Caboladies performance at White Flag Projects on Friday, January 18 we caught up with Kannapell to discuss the NMC's 54th year, the importance of appropriate venues, and the integration of "visual music" into their concert schedule.

Josh Levi: What events are you most excited to experience this season?

Jeremy Kannapell: Musicians like Marina Rosenfeld and Caboladies are approaching mediums like turntables and electronics from a different angle than you usually see in action. Same for figures like Kris Davis, Taylor Ho Bynum, and Lotte Anker, who are approaching instruments and composition in a really intuitive, extended manner ... so from even just a programming standpoint, putting together a season with a span and variety in backgrounds and approaches is exciting.Then, hearing actual material these artists perform and communicate live is, in itself, a whole other level of excitement, and because of this span and variety in artistic vision, each concert presents a totally different learning experience, both in terms of what it takes to make it happen but also the ideas these artists are bringing to the table.

What sets the NMC apart from similar organizations across the American landscape?

There are probably many details and ideas that are different for other organizations. For instance some have their own venues, some do less events, some more. Actually this year I touched base with a few similar organizations, just to see what their process is and challenges are in doing this sort of thing. It was encouraging to see how similar some ideas were, and more encouraging was the energy and enthusiasm they all have. Obviously there's a whole dialogue going on with whatever the current paradigm shifts may be with how people experience and listen to music -- I wont get into all of that -- but it's really cool too see that throughout the years. Everyone at NMC is still committed to presenting these artists and putting on these concerts, and that hasn't changed. Of course, I wasn't there at the start, but it seems that's been the core idea for NMC for 54 years.

How important is the venue in regards to these type of performances? What venues do you appreciate?

As NMC does not have a dedicated space we do events at, to present the artists in a space that makes sense for what they are doing is pretty essential. So far this year, we've already worked with organizations like the Luminary and CAM - both of those concerts were spot-on for spaces that help further translate the material at hand.

Working with and teaming up with other arts organizations/spaces is great for a whole list of reasons. Much effort goes into making these concerts happen, so when another organization can help a little it just goes miles. This week's concert for Caboladies will be at White Flag Projects. We did Keith Fullerton Whitman and Tony Conrad there last year and those worked out wonderfully. I expect this next gig to totally be on par with those. And, like last year, we will end our Season with a concert at the William A. Kerr Foundation building out on the riverfront -- a really fun building, and maybe a place and part of St. Louis not everyone has seen yet.

There is often a strong connection between experimental music and film. How will this new film program work in conjunction with the NMC's current modus operandi? What are you anticipating?

"Sound and Vision"...maybe a term everyone has heard so often that it doesn't immediately register its full meaning or potential at this point. Still, its evidence is everywhere and there's so much room to explore. I think a good example would be Robert Beatty's surreal, glowing cyber-visuals. To me they are an extension of that impulse to explore those sound and image connections.

Center for Visual Music is a film preservation organization out of LA who keeps this often overlooked element of "visual film" alive. They are putting together a film program for NMC in April. Filmmakers like Oskar Fischinger and Jordan Belson certainly were trying to figure out new ways of correlating image and sound in film, Their approaches still register as really powerful experimental artworks.

The films CVM document span from cinema's beginnings to pioneers in computer and electronic images from the '60s and '70s, as well as contemporary video artists. These films are always fun to watch. From the more abstract and poetic films to optically intense and technical, they piece together a lot of history in a very graspable way. Many of these films on the CVM program still only exist on film, so it's a chance to see some really rare film history.