"Memories of Elvis" By the Numbers: Pelvic Thrust Count and Other Highlights

"Memories of Elvis" featuring Steve Davis and the Mid-South Revival The Pageant Jan. 12, 2013

Dead for more than 35 years, Elvis Presley's ghost returns to St. Louis every January to throw himself a big ol' birthday bash. But there are no party hats and peanut butter-and-banana sandwiches -- it's all booze, dancing and rhinestones out the wazoo.

Elvis impersonator Steve Davis has kept "The King" alive for more than twenty years through his "Memories of Elvis" extravaganza, which returned Saturday night to the Pageant. Flamboyant jumpsuits! Patriotic backdrops! Buddy Holly and Patsy Cline (creating a "dead people-palooza," as the evening's emcee suggested)! Davis' show prides itself on accurately depicting the details of Presley's live performances, right down to the tears on his screaming fans' faces. Some highlights:

2. After the trailer, the audience was teased further with "Ready for the King?" superimposed over a 50-foot image of Davis' jumpsuit-adorned crotch. Davis appears to be a righty -- and I'm not talking about his hand.

3. With nearly 20 performers waiting on stage, Davis finally appeared, donning an indigo jumpsuit covered in silver studs and rhinestones. I froze in terror for a moment, having a Clownvis Presley flashback, but it quickly passed. Davis' entrance song: "C.C. Ryder," naturally.

4. "Memories of Elvis" covers Presley's songs from the Sun Records years through his final Vegas performances. Within the first 30 minutes, the audience was treated to "Burning Love," A Little Less Conversation," "Jailhouse Rock" and "Treat Me Nice."

5. The first teddy bear was thrown onstage during "Never Been to Spain," the fourth song.

6. Davis often referenced "the Spirit," encouraging the audience with "If you get louder, you might get the Spirit on you." Yes, my friend and I made jokes Adam Sandler would be proud of.

7. Davis was backed by the Mid-South Revival, a band full of musicians who played well and got into their hammy roles. The alto sax player wore a SpongeBob tie.

8. "Little Sister" included a wonderful performance of the Beatles' "Get Back" and featured sax, guitar and drum solos before returning to the original song.

9. Davis and his backup singers -- the Double Trouble team and opener Rivertown Sound -- left the stage during "Polk Salad Annie" while Mid-South continued playing and featured a bass solo. The singers later returned in choir robes, while Davis donned his famous white jumpsuit that featured an extravagant rhinestone eagle on the back.

10. "In the Ghetto," "How Great Thou Art" and "Down by the Riverside" were featured in the gospel portion of the evening, a time when many audience members fetched more booze. 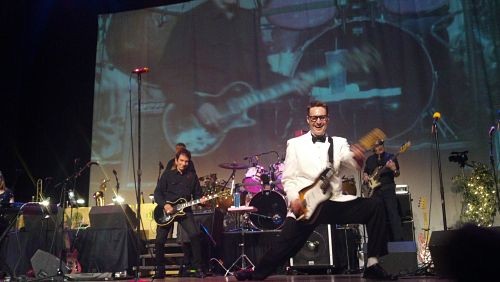 11. Davis wiped his face with a pair of panties that a fan tossed to him during "(You're the) Devil in Disguise."

12. The band performed another excellent medley for "Hound Dog," adding "Roll Over Beethoven," "Don't Be Cruel," "Whole Lotta Shakin' Goin' On" and "Teddy Bear" to the song.

13. Davis gave a number of birthday shout-outs, including one to Beatle Bob, who was dancing near the stage. He and the band sang "Happy birthday to y'all." ("I didn't know he was still alive!" claimed a lady near me.)

14. The band closed the evening with a dedication to the armed forces and first responders, performing "Dixie" and the "Glory, glory, hallelujah" section of the "Battle Hymn of the Republic" in front of a backdrop that featured a giant American flag and bald eagle. I spied some audience members singing along, hands over hearts.

"Memories of Elvis" by the numbers (by my count, which admittedly could be off, as I was busy laughing, clapping and singing):

40 scarves and leis: In true "King" fashion, Davis removes items that are glistening with his neck sweat and doles them out to adoring ladies in the front row.

26 roses: Davis' group resells and reuses the roses that fans offer him during the show, funding flowers and pear trees at Jefferson Barracks National Cemetery and programs at Fisher House.

25 stuffed animals: The toys that men and women toss onstage go to Shriners Hospital, St. Louis Children's Hospital and 16 other area charities for kids. (Side note: As we waited for the "Elvis" portion of the show, my friend remarked, "All the people holding teddy bears are starting to freak me out.")

4 panties: It's not a true concert experience until women throw thongs to a frontman.

1 "Thank you very much": I was surprised that one of Presley's well-known phrases wasn't used more.

1 (???) pelvic thrust: This was the fourth time I've seen the show, and it was the least thrusty of the bunch. He basically pranced the stage and pointed at people. Don't get me wrong, it was still great, but it was... different. I have the list of things in my notebook that I counted with hashmarks next to them, and by pelvis, I have "1(?)".