[Update 2/1/13: Tef Poe just won Freestyle Friday again! In addition, since this post was originally published Tef released his latest mixtape, The Hero Killer (produced by DJ Trackstar) on January 21 in anticipation of the upcoming album Cheer For The Villain. He also took home the awards for Best Male Hip-Hop, Best Mixtape (War Machine 2), and Artist of the Year in this year's SLUM Fest awards. Tef is on a roll this year -- congrats to him for the win!] Original post:

Maybe you've seen him on one of those huge, looming billboards lining the highways. Maybe you caught him on BET's 106 & Park, where he currently reigns as FreeStyle Friday champion. Maybe you caught his performance at a sold-out Old Rock House last month with Talib Kweli. Or in the pages of the Source last year, or in XXL. Maybe you've read his insightful words within these RFT blogs themselves. Whatever the case, the point is clear: Tef Poe is everywhere lately.

See also: -The Top St. Louis Hip-Hop Artists to Watch in 2013 -The Best Hip-Hop Release to Come Out of Saint Louis in 2012 - Here's Why You Never Get Booked as an Opening Act

Despite success that would be dizzying for some, Tef is staying grounded. "My advice is, don't get too excited," he explains. "Excitement prevents you from thinking clearly and making sound decisions. In today's music biz you're here today, gone tomorrow."

"I haven't done much of anything yet," he says. "I'm just fighting like hell every day, hoping I earn myself a spot in the big leagues eventually." 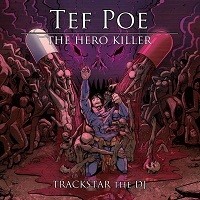 Tef's latest song, "Rap F##ked Up" was produced by AverageJo and is part of his upcoming EP entitled The Hero Killer. It actually debuted last week on Killer Mike's podcast and the response was so strong he decided to release it in advance of the EP, which is set to drop January 21. The entire EP will be available for free download on that day, and it is meant to serve as a sampler for his highly-anticipated Cheer for the Villian release, set for release on April 1. Stream the new track below.