CutForBieber Was a 4chan Prank, but in 2013 Pranks and Trends are Basically the Same Thing 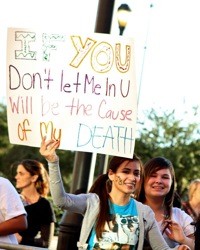 Pranks are never more effective than when a prankster finds the precise border between reality and absurdity and just barely steps over it. This week's #CutForBieber trending topic--in which Justin Bieber fans were supposed to be cutting themselves in an attempt to force their ur-boyfriend off marijuana--was a perfectly executed example. Are there quite enough Beliebers interested in targeted self-harm to float a genuine reverse-protection-racket hashtag? Probably not. Are there a few? Suddenly plausible. In that space: The prank. But the fascinating part about #CutForBieber isn't just the execution--it's how evanescent prank and prankster were. There's no Allen Funt here, and no footage of Justin Bieber bursting through a door and everybody sigh-laughing in relief.

There's just 4chan, and stories about a thing that was briefly happening and now isn't. #CutForBieber is an artifact of a system in which pranks and trending topics are functionally identical.

Anyone who's spent more than a few months on Twitter begins, after a while, to develop his own method of sussing out actual trending topics from prank trending topics. Usually they're about celebrities dying--RIP Allen Funt--and it becomes helpful to balance the celebrity's stature with his place on the trending topic list. If Tom Cruise really did fall off that cliff in New Zealand, wouldn't there be more trending topics? And so on.

But these pranks are carried out on an enormous scale--the pranksters, 4chan, are nothing less than the V-for-Vendetta-mask-wearing aggregate of America's native smug-teenage-atheist, brony (look that up), and guro-afficianado (don't look that up) populations, and the prankee is just everybody. (In this particular case, according to second-generation copies of the long-gone post, the target was ostensibly "little girls" but reads more broadly as "authority figures in our lives who will be super pissed that we tell little girls to cut themselves.")

So even as one wave saw the hashtag, briefly freaked out, and then realized it was a well-executed prank, the next Twitter time zone over was getting caught up in its wake; every mention of #CutForBieber, even "Oh man just realized #CutForBieber was a prank," brought it deeper into circulation. As best I can tell, this is the current distribution of #CutForBieber tweets: 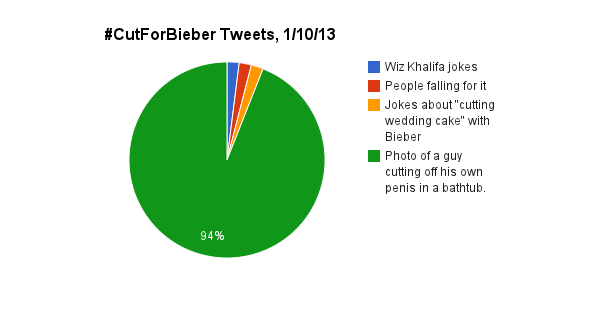 But it doesn't matter how poor their success rate is, or how many 4chan users with shock-photo copypasta it takes to fool one Little Girl; one percent of millions of Twitter users who inexplicably pay attention to the trending topics is still a lot of marks.

That's the weird math of internet trends, and it's as true of Bieber himself as it is people cutting for him: Whether you're sincere or ironic, whether you love or hate something, whether you think you're fighting a trend or you're happy to be a part of one, nothing creates a music sensation in 2013 more than talking about people talking about it.