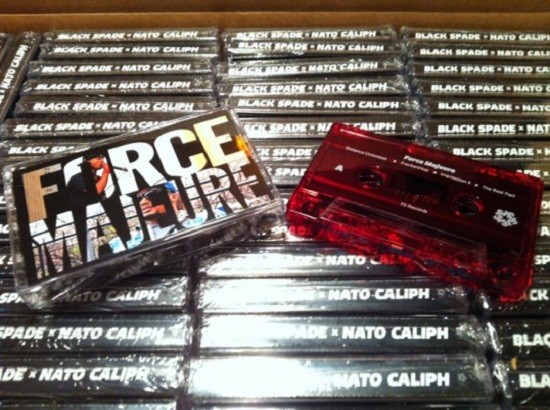 Force compatriots Black Spade and Nato Caliph commit their long-running musical kinship to tape for the first time on Force Majeure. And I mean "tape" literally -- this nine-song program (featuring two interludes and a remix) is being released on cassette and .mp3, and the abbreviated format shows the hip-hop soothsayers work their styles together and independently. It's a credit to the depth of these songs and the performers that the album feels deeper and longer than its 22-minute run time. Black Spade, under his Stoney Rock alias, handles the bulk of the production here, and his beats are forceful and direct, with a flurry of mood-altering samples (swooping strings on "Distance Unlimited," a plinky upright piano on "FrankenHop," vocal snippets from Dr. Dre and Jack Nicholson throughout). Black Spade's penchant for bizarro soul matches well with Nato Caliph's unblinking, perception-challenging verses.

Lawyers and Francophiles will know that "force majeure" translates as "act of God" -- usually used as a stand-in for "disaster" in insurance claims. Caliph and Spade take the more positive meaning here, but these lyricists still take aim at a fair share of manmade disasters. "FrankenHop" challenges prefab hip-hop acts that are long on swagger and short on soul; Shorty Live (of the Alps Crew) drops a spirited verse over local turntablist DJ Alejan's scratches. "Impression X" takes a sweeping look at globalization and media saturation, from Monsanto and Apple to the effects of the C.I.A. and the Black Panthers. It's a mélange of references and boldface names that walk the line between rewriting history and advancing conspiracy theories.

Black Spade's production slows down the BPM's and turns up the soul and funk as the tape reaches its second side. "The Best Part" stretches out the groove to a taffy-like consistency while Caliph holds down the center. "Coitus Magnetic," featuring the oohs and ahhs of Teresa Jenee, is a bona fide slow-jam, with Philly Soul string samples providing a waterbed of syrupy soul for the rather revealing lyrics. (Even the best rappers can't make the word "penetrate" sound anything less than clinical. Or gross.) But Spade's Aquarian soul jams and Caliph's consciousness-raising rhymes strike a balance between the soft and the hard and provide a solid complement to each other's strengths.

Purchase the tape here. There's also a streaming preview toward the bottom of that page as well. In addition, check out this video preview of the tape: