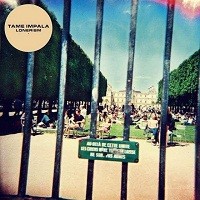 I am a chronic ranker of things, a lister. You give me a category - movies, music, vegetables, just about anything besides my children - and I'll give you a nice, neat list of my favorites. For my summary of the year 2012, a single Top Ten List didn't seem sufficient, so instead I submit my Top Five Top Fives of 2012. First, a disclaimer: I read about and listen to as much music as I can, but music is my vacation, not my vocation. So if you read this and are inclined to deride me with "what about (fill in whichever album I missed)?", I probably didn't hear it. If there is something my life wouldn't be complete without me hearing, let me know about it on Twitter (@thegeeter).

So Without further ado....

See also: - The Top Five Notes on My Bass Guitar - The Six Best Shows of 2012 That Nobody Attended - The Ten Best Musical Happenings of 2012: Humble Edition

Albums: 5. Pond - Beards, Wives, Denim. Borrowing much of its style (and two of its band members) from fellow Aussies Tame Impala, Pond is the raging yang to Impala's sobering yin. 4. Jack White - Blunderbuss. In his first solo effort (although many would argue that every White Stripes album was pretty much solo), White effortlessly vacillates between the raucous ("Sixteen Saltines") and the mellow ("Blunderbuss") while hitting all spots in between. Only a few weak tracks in the second half keep this from finishing even higher on this list. 3. White Rabbits - Milk Famous. The most common question anyone asks about a band he or she doesn't know is "Who do they sound like?" The answer when that is asked about White Rabbits is simple: Spoon. They sound like Spoon. And in my mind, that is a very good thing. 2. Grizzly Bear - Shields. With its wonderfully eclectic follow-up to 2009's "Veckatimest", Grizzly Bear firmly plants its paws at the top of the list of indie rock bands, or at least amongst the myriad of those with animal names. 1. Tame Impala - Lonerism. The Australian quartet delivers spectacular psychedelic rock that would make Jefferson Airplane (pre-"We Built This City", of course) proud. The album's themes of loneliness and isolation match perfectly with the vocal style of Kevin Parker, who sounds like he is singing much of the time from down the hall somewhere. Apologies to: Japandroids - Celebration Rock, Bob Mould - Silver Age, Alabama Shakes - Boys and Girls, Sharon Von Etten - Tramp, Beach House - Bloom

Up next: Best songs of the year, and even more lists!

5. "The House That Heaven Built" - Japandroids 4. "Hey Jane" - Spiritualized 3. "Briefest Moment" - Bob Mould 2. "Yet Again" - Grizzly Bear 1. "The Magic Clap" - The Coup. It's a musical 5-Hour Energy, it's an entire party condensed into three minutes, it's more infectious than a Jersey Shore cast member. Play this song and try to be in a bad mood.

Top 5 TV Shows: 5. "Homeland". After an outstanding rookie season, "Homeland" suffered through a serious sophomore slump, as some of the leaps-in-logic one expects to take for a show like this require a Michael Jordan-esque effort. The show still entertains, but Nicholas Brody might be an octuple agent at this point and his relationship with Carrie Matheson is more volatile than enriched uranium. 4. "Mad Men". The show isn't nearly as interesting now that the secret of Don Draper's real identity has been dealt with and he is taking his fidelity oath more seriously in his second marriage, but "Mad Men" remains a great period piece and will make my top five for as long as Roger Sterling is on the show. 3. "Louie". The perpetually glum comedian continues to produce the most unique show on television. Not really a comedy, not really a dramedy, just a fascinating semi-autobiographical look at Louie C.K.'s life as a stand-up comic and divorced father of two young girls. 2. "Parks and Recreation". The most reliable comedy on television, the lovable misfit government employees of Pawnee, Indiana bring the funny each and every week. 1. "Breaking Bad". Someday the world will look back on "Homeland" winning the Emmy for best TV Drama over "Breaking Bad" the way it does Marissa Tomei's Oscar or Milli Vanilli's Grammys. In the first eight episodes of its final season, Breaking Bad expertly set the stage for what will certainly be an epic conclusion, as former milquetoast chemistry teacher Walter White continues his self-induced moral decay.

The Top 5 Concerts I Saw in 2012: 5. Childish Gambino, Skrillex at Bonnaroo (tie). 4. Japandroids at the Firebird. 3. Alabama Shakes at Bonnaroo. 2. TuNeYaRds at Bonnaroo. 1. Bob Mould at Wonder Ballroom, Portland, Oregon. To celebrate the twenty-year anniversary of its release, Mould played the seminal Sugar album Copper Blue from start to finish to open the show. The crowd could have been sent home happy right then, but the indomitable Mould went on another hour, playing much of the outstanding "Silver Age" as well as several Husker Du songs.

Top 5 Music Resolutions: 5. Stop deriding others for their deficient taste in music. After all, if they are going to actually listen to that Kenny Chesney album, isn't that punishment enough? 4. Go back, as I go forward. Too often I am guilty of only caring about the music of the moment in an effort to keep up. It is just as important to listen to those who came before and influenced what we enjoy today. 3. Stop singing impossibly dorky elevator songs while wearing douchey hats. (Whoops, that one is for Jason Mraz). 2. Learn the guitar. My hope is that learning an instrument will enhance my love of music and make me feel less of a hypocrite for pushing my daughters to play the piano without being able to play anything more than a kazoo myself. 1. Never stop rocking. This is the only resolution I have been able to keep in every one of my 40 years. Music is important to the health of one's soul. When you stop making music a part of your everyday life, when you stop attempting to expand your musical horizons, a part of you dies. Never stop.