A few days ago on NPR's All Things Considered program, Beck spoke about his much discussed sheet music only album Song Reader and offered an interesting thought nugget on his previous work: "When I put out one of my early records ... they sent me a sheet music version of the album. It ended up feeling like it was an abstraction of these recordings that I'd done; it just seemed sort of backward." Upon hearing this, I dug up my treasured copy of the tab book from Beck's 1996 album Odelay and fired up the scanner. Here are the six best excerpts from the Odelay sheet music book. 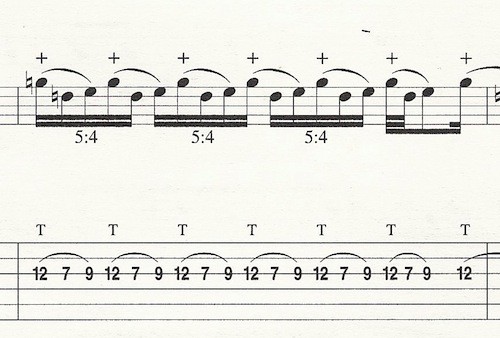 6. Solo from "Lord Only Knows"

Please note that no requisite music reading experience or knowledge is needed to know that the above image looks insane. I can assure this is because the above image is completely illogical. All those fives and fours are the kind of things people write in to make sense of a part that does not fit squarely into any predetermined grid. To date, there is no proper marking for "ironic out of time shredding" in the manuscript lexicon.

5. Interlude from "High 5 (Rock The Catskills)"

During this interlude, the third guitar is told to "tacet," or rest, while approximately ten seconds of nondescript classical music is to be played. Compare this direction to what the actual song sounds like at this point. Think about what Beck said about sheet music being a backwards abstraction of a recording. Woah.

When looking at the above image, remember that somebody on the Hal Leonard Music Publishing Corporation payroll was tasked with transcribing the notes Beck half-sang during "That was a good drum break."

Really, since the Odelay tab book is authorized by Beck, it is more valuable as a semi-proper lyric sheet than as a play-along. Right here, I always thought he said "Rockin' the Catskills like a man from the Catskills." I stand corrected and, frankly, kind of disappointed.

Keeping in mind the awesomeness of somebody being paid to transcribe this sample, I only have one comment and complaint here. Immediately after the male voice says "I came here to tell you about the rhythms of the universe," there should be a notation for "sweet conga fill."

At this point in "Where It's At," after the final chorus of two turntables and a microphone, the editors of this book surrender to Beck's weirdness: "ad lib vocals, keyboards, organ, sound effects, and distorted harmonica till fade." This exposes a limitation of sheet music - the sounds of Odelay can't be penned down or recreated easily. The closest message to the reader trying to follow along is basically "do whatever, it doesn't matter, it's all going to fade out anyway." At the same time, the recording of "Where It's At" is confined by inflexibility. Play it 100 times, it will still be the same distorted harmonica fade every time. This is a restriction not placed on the Song Reader tunes, which are freed for interpretation and all the ad lib organs you can find. But, perusing through the crowdsourced videos from Song Reader and listening to "Where It's At," it's clear that some things are not better on paper.