The Ten Best Shows in St. Louis This Weekend: December 28 to 30 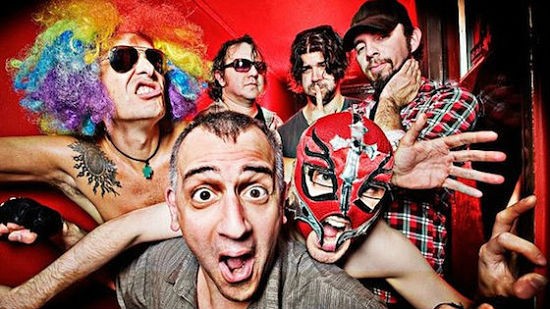 Hey guys, I'm Daniel Hill! Well, sort of. On the computer I'm using, I'm known in techie login terms as "Hillda" at least. Cute nickname, huh? My name's Mabel, and I'm hanging out at Hillda's desk as the new Clubs Editor until somebody around here shows me to a desk of my own. Meanwhile, the real Daniel's getting comfy in his soon-to-be new work space before Kiernan leaves for good to mess with Texas. Texas, you've been warned!

The week between Christmas and New Year's is pretty slow around RFT headquarters, but not as slow as the Internet connection here. While Daniel's in Kiernan's office touching all of his stuff and attempting to watch five-second spurts of a video on a laggy YouTube, I'm contemplating the appropriate wording for the sincere-sounding coming-out statement I'm about to post on his automatically-logged-in Facebook account and entering dozens and dozens of shows into our Concert Calendar.

And whoa -- this city has a ton of shows. I've always believed that St. Louis is a pretty kick-ass music city, but even moreso now that I'm going over it with a fine-toothed comb. So here goes -- my first weekend post (again, sort of)! This is going to be fun.

Fatlip (of Pharcyde) @ Lola 10 p.m. | $10 Fatlip, formerly of acclaimed alternative hip-hop group the Pharcyde, is still one of the best in the game. What up Fatlip? (DH)

Shaved Women w/ D.O.C., NRML PPL @ Blank Space 9 p.m. | $5 Help make punk time a thing of the past. This quick, intense night with both a band from the coast and a local 7" release promises to run tight. (MS)

The Fuck Off and Dies w/ Midwest Avengers, Unifyah, Fivefold @ The Firebird 7:30 p.m. | $8 Proceeds from this show go to benefit kids, somehow! Also, from what I can tell, this is apparently sponsored somehow by Radio Disney? So yeah, go to this Radio Disney-sponsored Fuck Off and Dies show. For the kids. (DH)

The Vanilla Beans @ Mangia Italiano 10 p.m. | free Electro-pop so sweet and silly, it'll give ya cavities. And who can argue with free? You can floss later. (MS)

The Dwarves w/ The Scam, The Winchester @ Fubar 8 p.m. | $15 Sure to be a debaucherous good time filled with nudity and profanity. Punk! (DH)

Orgone @ Old Rock House 8:00 p.m. | $12-$25 Got plans on New Years Eve that don't involve the Old Rock House? Well, you still get a chance to see Los Angeles' funk-tastic Orgone; the band is playing back to back nights to help St. Louis ease into 2013 properly. (DH)