Six Tips for Dating a Musician 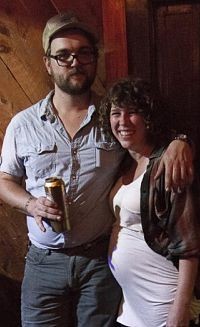 Editor's note: Be sure to check out or newly-posted Six Tips for Dating a Musician: Female Edition!

Musicians have an uncanny ability to send shivers down the pants of even their most a-sexual of onlookers. Even the ugliest asshole on the planet, wielding his/her musical weapon of choice in front of a crowd, can garner the underwear-throwing attention of an audience. Musicians uphold, perhaps even created, the "cool affect." Some people simply want nothing more than to be a part of their club. I spent the last year head-deep in that club as a girlfriend-of-a-musician -- these are the lessons I quickly learned. All of these tips work just as well for boyfriends of female musicians too, by the way. Or boyfriends of boyfriends, or girlfriends of girlfriends -- whatever turns you on, as they say.

Seriously, it's the biggest cliché in the book -- do you want to be a part of it? Your boyfriend is a wonderful musician. He works very hard, but he is not always better than the rest of his band. He does not need to branch out and gain more recognition and individual praise from the music community. That is what you are there for (see The Support Factor).

In short, he is not always the best part of the band. The band unit is a highly important force -- their bond fuels their collaborations and it is the combination of their ideas that make their music. They need to fight, they need to get trashed together, or break things or do whatever it is that feeds their inspiration. They need each other, and it is your responsibility to make sure that you don't get in the way.

Do not beg him, in your infinite neediness, to stay home from band practice. Do not yell at him and tell him scornfully that the band is more important than you are (if it is more important, you'll find out the hard way). Do not bogart his attention at shows (see Proper Show Behavior). In fact, do not bogart his attention ever, but especially from people within his music community. Music is a part of him that he cannot explain to you. It makes up a large part of who he is, how he looks at the world and how he sees himself fitting into it. To be a part of that, you must learn your place.

You must support his music. After all, it is likely the reason you were attracted to him in the first place. In that case, there are areas wherein you can extend a helping hand. Help carry gear or merch if you can. Musicians have a lot of baggage (and more than just the emotional kind that seems to shine through in their songs). Instruments, amps, merchandise: They all need to make it to the gig. If your car is needed, offer it. And after you're done loading it all it, stay. You should go to as many shows as humanly possible (see Proper Show Behavior). Your presence there is very appreciated. Encourage practices, bookings, writing; encourage the good stuff.

Part of the local scene is networking. He needs to not only book his own shows, but also to go to other people's shows. His friend's, the local DJ's event, this party, that party; he needs to show his face around town. Everyone knows everyone in St. Louis, and the more people he knows in the local scene, the better. Be the pretty face on his arm that understands him and his music. Be his networking buddy.

In order to not Yoko Ono, you must be on board for whatever he needs musically. Lastly, if you don't like his music, you are dating the wrong musician. Do not try to veer him a new direction. He creates what he wants to create -- bottom line. Which leads me to number three.... 3: Balance Your Opinion

You are not his manager. Maybe at home your word is law, but not here. Your opinion needs to be perfectly balanced. He will probably ask you what you thought of the set or new song or album. Remember, you are there to support, so you think it sounds good. But that doesn't mean you can't tell him when it sucked. Tact comes in handy. Start with what was good and then add your true opinion. If you are attending shows a lot, remember that not everyone there has seen the performance over and over and therefore probably didn't notice the tiny mistake. Take things from the position of the crowd. When things are rough, let him know, that way he can improve them next time around. "Honey, you just can't have eight whiskeys before you go on stage. Puking in the bucket did not make the set cooler."

Do not distract him from the show. He is focused, he is determined, he is trying to perform. So please, do not yell out "That's my boyfriend" or "That's my baby daddy" while he is on stage. You may get bored while he is up there. Maybe you have seen him perform over 100 times. No matter what, do not turn into a wasted mess. Save the nights that you need a babysitter for when he is not playing; he is not going to come off the stage and stop you from making an absolute fool of yourself. Plus acting a fool makes him look bad. St. Louis is a small city, people will find out. Do not be this chick.

While you are enjoying his set, sipping casually on your drink, understand there may be a hole you need to fill. This hole is the merchandise booth: Work the merch booth if no one else can. This typically happens while the band is actually on stage, but it is during this time that fans decide whether or not they are going to buy something. If no one is there to take the money, one of two things will happen: They won't buy anything or they will steal it.

Lastly, do not get jealous if chicks hit on him. Remember when you were gazing at him from the crowd all googly-eyed? Well there are other chicks out there doing the same thing. They are going to want to flirt with him. They do not know or care if he is in a relationship with you. Trust and have faith, unless you have already broken some of these rules, he is still most likely coming home with you at the end of the night (especially if you have driven him and helped carry all of his gear). Flirting with girls is part of the job. It usually gets them to buy stuff. 5. Be a Modest Muse

Accept that he may write songs about your personal lives. Then, he will sing those songs to masses of people that you know and don't know. He will describe your deepest romantic moments and most insane freak-outs to strangers. Possibly worse than this, is that he will tell them to your closest friends also. They may learn your favorite sex position, your secret nicknames, or that you like to pee with the bathroom door open.

Get used to it, but don't get a big head about it either. No one wants to continually be reminded that "This song is about me!" They probably already figured that out. (If you need to get out the excitement that you are a musical muse, go listen to the Naked and Famous' "Girls Like You" in your headphones while you dance around your bedroom in your underwear, double checking how hot your bod is in the mirror.)

Accept that he writes song about other people. You are probably not the first girl he fell in love with. They have songs too, and he's not going to stop playing them. Plus, not every song out there is about romance and heartbreak. Inspiration finds him in the strangest places. His father, his love for booze and weed, his best friend, all the times he got mugged: All these and more will probably enter the picture at some point. I once witnessed a city squirrel inspire lyrics: "Ghetto squirrel, where do you hide your nuts?"

He's a musician. He loves music. He will want to talk about music at every chance he gets. Not just his music, but his friends' music and the music that he loves and strives to emulate. If you're not into this music, that's okay, but don't sit around bashing the things he thinks are great. If you can't find common ground when it comes to music, you are dating within the wrong genre. You can have different tastes, but you are going to need to be open and understanding to his likes and dislikes, as he will need to do the same. Sometimes you won't want to hear about the same album that changed his life over and over again -- but you are going to. Get used to it, and try to love that album also.

In short, if you're not into talking about music, going to shows, or hearing songs about yourself...you need to stop dating a musician.