Full Circle with The Flaming Lips: 2012 In Review

Editor's Note: The end of 2012 is upon us (also the end of the world, if you believe in that sort of thing), so we thought we'd put a cap on things by sharing some of our personal favorite shows, albums, events and general shenanigans. Join us as we indulge in some navel-gazing!

When I write articles for RFT Music, I'm not just reporting on music happenings -- I'm writing about my life. One day my priorities might change, but for now what matters the most to me is music. Maybe that's wrong or unhealthy or something, but it's true, and luckily most of my favorite music moments of 2012 have been documented in some way on these pages.

See Also: -Drinking with Guided By Voices: Can we Keep Up with Bob Pollard? (Spoiler Alert: No) -Ten Reasons Why Heart is Badass -Dinosaur Jr at LouFest, 8/25/12: Review, Photos and Setlist

I'm lucky in that I have a lot of freedom in this space. It's curated not only by people who give a crap, but by people who value what I have to offer. After seven years of writing for this publication, I'm still grateful and excited for the opportunity. I absolutely adore my job here at RFT Music. My life is my work and my work is my life, and I'm honored to share it with you.

I rang in the New Year in Oklahoma City. My sweet old dog, Ruby, had just passed and I was in the middle of some serious grief. I ran away for the weekend to hang out with old friends and see two shows with the Flaming Lips and my spirit animal, Yoko Ono. At the stroke of midnight, I was tipsy on pink lemonade moonshine, bathed in kisses and standing inside a massive sonic blast fortified by a fog of rainbow confetti, flashing lights, jumping lasers, hundreds of bright balloons and the twinkling reflections off of a giant disco ball. The Lips played Beatles covers with Yoko and Sean Lennon and Nels Cline; it was absolute bliss and served as a strong reminder of the healing power of live music.

I've been saved again and again by amazing music -- most of it local. I'm a huge fan of so many of our local bands. Many people wait years for their favorite bands to tour, but for me, my favorite bands play all the time. As an extra treat, I get the opportunity to write about these St. Louis music makers: Lion's Daughter, Prince Ea, Jimmy Griffin, Jans Project, Demonlover, Roland Johnson, Fred Friction, Nelly and the list goes on and on. I know that a lot of what I write reads as love letters to St. Louis, but I just can't help myself -- St. Louis just makes it too easy. Stop being so awesome and I'll stop writing about you. Until then, the locals have my heart. (Extra double shout-out to people that I'm proud to call my friends, the hard-working folks at Big Muddy Records, Tower Groove Records and the Rats & People Motion Picture Orchestra.)

I'm not sure why, but this year I felt particularly productive. I was given space to write about music-minded locals who inspire me creatively (Thomas Crone, Dana Smith), about St. Louis music history (STL 2000) and I got to hype the touring bands that I was the most excited about (Future of the Left, R. Ring). I'm still not quite over the fact that I actually get paid to get drunk and watch Guided by Voices, to eat pizza and listen to Taylor Swift, to try to convince readers that Heart is badass, to watch classic bands like Kiss and Mötley Crüe, to review Madonna from the second row, to jump into the world of Juggalos, to get Sinead O'Connor's take on St. Louis (and Chuck Berry) and to praise my personal heros like Bonnie Raitt and Henry Rollins. If you can find a girl that is luckier than me, I'd sure like to meet her. 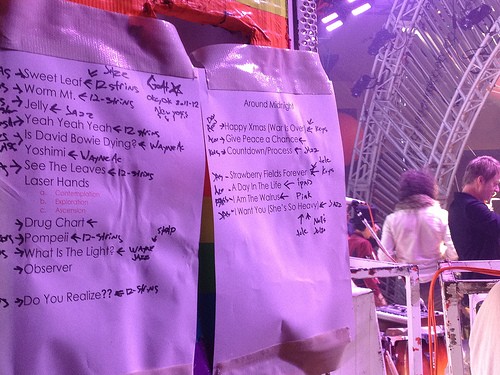 Under the advice of my very favorite punk rock couple, I attended a show with a band I'd never heard before: I saw Useless Eaters at CBGB and it was the best damn show I saw all year. These kinds of happy accidents only occur when you actually listen to the suggestions of others, so try keep some cooler-than-you friends around.

And though I was stoked on the lineup this year at our big summer festival, LouFest, I had originally declined to do any LouFest coverage. I wanted a weekend of fun, without having to spend all night writing reviews. But there was a last-minute rescheduling and Kiernan came and found me right before Dinosaur Jr played. He needed someone to write about Dino's set. I said sure, knowing that it would actually be easy-- on some level I'd been prepared to review a Dino show for at least half of my life. Kiernan hunted down an empty beer box for me to write on and then he went back out into the crowd, off on his next mission. I found a pen, ducked under a friend's umbrella and wrote my notes out on the cardboard. Improvising ain't just for musicians, you know, and the Dino review turned out to be one of my favorite things that I wrote all year.

Since then my life and routines have gotten back on schedule, and this fall has been one great event after the last, and with the upcoming holiday season is bringing tons of shows that I'm excited about-- I predict that I won't get much sleep through the end of the year.

As for the future, who knows? I'm excited about the new crop of weirdness on the South Side. Magic City, Black James, Syna So Pro, Demonlover, Bug Chaser and Horsey Drawers have my interest right now, but nobody can't predict what insanity will come in 2013. I, for one, can't wait. Bring on the New Year. I'll be lurking in the many venues, festivals, dark basements, loud practice spaces and fancy recording studios around town. See you at the barricades.