Update, 12/17: We'll close the poll at 5 p.m. this Wednesday, December 19. Thanks to everyone who has already voiced an opinion -- we've collected just over 900 votes in four days.

We've spent the last couple weeks introducing you to our ten favorite music photographers in St. Louis. And now it's your turn to determine who is the best of the best -- you can vote here. We've included one of the five photos each finalist submitted to us; to see the other four and read the rest of our interview you can check out the full profiles at the links below. Did we miss your pick? Feel free to write him or her in. Have at it:

Corey Woodruff: To me, a great concert photo conveys a sense of what it was like to be in that room, at that moment, with that artist. That's my ultimate goal--to do more than merely document the event. It's hard as hell to do, but it's always in the back of my mind when I am shooting a show.

Kenny Williamson: 'Great' is rare. 'Great' is capturing a unique moment, that has never been seen, hasn't happened before with the artist, and likely will never happen again, which people will remember from the image for decades. This has happened to me several times, but unfortunately the camera was out of focus, I had the lens cap on, or a security guards head was in my way when the moment happened.. still waiting for my Great one.

Jason Stoff: In my opinion, a truly great concert photo makes you want to relive the show if you were there -- or alternately, makes you regret not attending the show.

Concert photography can straddle a fine line between photojournalism and photography as Art with a capital "A", as it's easy for a concert photographer to imprint their personal vision on a show's events to tell a different story.

Bryan Sutter: I think a lot of people would say that capturing the moment makes a great concert photo, and they are largely correct. People can point out a great photo when they see it. However, for the photographer I feel that it is important to not have very strong preferences when shooting. Sometimes the lighting is just right where you can capture a certain detail or action in a way that is really pleasing and descriptive. Other times, a photo of the crowd from the back of the room, while nothing that is particularly exciting is happening on stage, can tell just as much.

Todd Owyoung: For me, a great live music photo is one that captures the heart of the band, one that makes you feel as though you were at the show.

The best concert images are ones that can make you hear the music and the roar of the crowd, long after the lights have gone down and your ears have stopped ringing.

Jon Gitchoff: Capturing the feel or emotion of a show. We only get to be there for a short period of time, so I'm always looking for those moments that best represent my experience in the pit.

Jarred Gastreich: The recipe to a great concert photo goes something like this: four gallons of great composition, three cups of an exceptional moment, two big tablespoons of knowledge of your equipment, and one teaspoon of post-work (editing). Composition is what will separate your shot from all the other photographers in the photo pit going after the same moment. 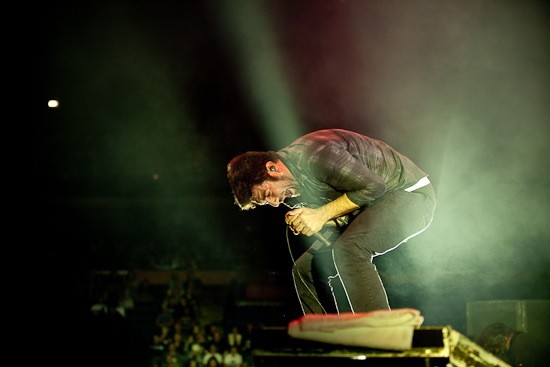 Ben Fournier: In my opinion, a great concert photo should capture the essence of the show. The look of the artist might not always match the sound of the music, but I should be able to get a vibe of what kind of music the band is performing by looking at the photo. It has to be clear enough to see whats going on, but it doesn't have to look like it was a show with high production value. It should should be shot from an angle that compliments what you are seeing and should work with the lighting. Wider shots should set the scene for whats happening on stage, and I prefer my up close tight shots to convey emotion rather than just a musician playing his instrument.

Nate Burrell: There are so many ways a photographer can capture a great concert photo in his/her lens. Sometimes it can be catching the "money shot" where the lead singer, guitarist, or other band member is photographed in an extremely theatrical or action oriented movement. Other times, the photograph is full of numerous subtleties that are not reproducible such as facial expressions, the way the lens grabs the light, or capturing performers interacting with the crowd. I tend to like those moments that happen in bewteen when the artist is displaying a bit of the "iconic" presence, as well as unknowingly showing non rehearsed and honest human imperfections.