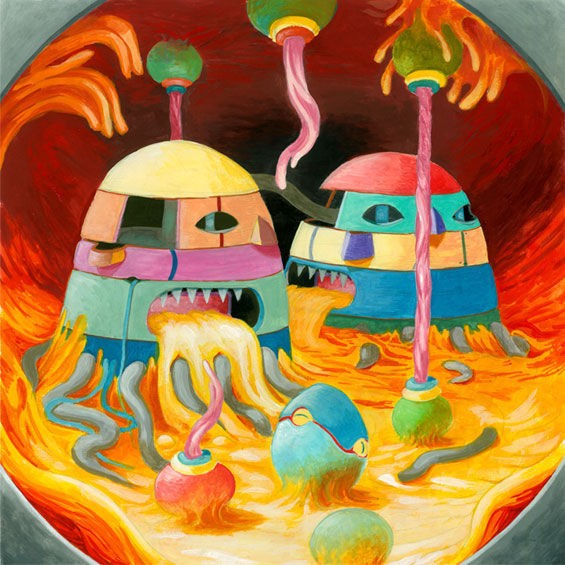 Together, Joseph Hess and Mabel Suen make St. Louis a much noisier place. As light-night DJs on the KDHX (88.1 FM) program Wrong Division, the couple spins sides from labels like Skin Graft and Touch and Go with special attention paid to local bands, past and present. Their website, wrongdivision.com, is a vital and comprehensive weekly guide to the city's underground shows, and both Hess and Suen have written about music and culture for Riverfront Times. Somehow they find time to tour relentlessly as Spelling Bee, a guitar-and-drums duo that takes the raw, unbridled wails and rhythms of basement punk and corrals them with the discipline of math rock.

The result, on the latest album Caterwaul and in concert, is a type of music that has the velocity of hardcore with the nuance of something more intricate. Suen especially has internalized the fluidity of math rock, and her guitar lines are both nimble and raw. She's a ballet dancer doing a pirouette in jackboots.

It might take a few listens to Caterwaul to discern the various strands that tie the din together. Much of the record sounds like Suen and Hess are pounding away with little care for subtlety -- and to a point, they are. That's part of the deal with Spelling Bee. But at the risk of sounding like some insufferable Radiohead fan, this is a record that's more rewarding on good headphones than blasted from big speakers. (Fellow RFT contributor Ryan Wasoba recorded and mixed the record; anyone looking to lobby inside-baseball cronyism complaints has just hit pay dirt.)

The stereo panning on a song like "Stretch Marks" reveals the strata of guitar sound coming from Suen's rig. The smartly deployed reverb on "I Am Gust" gives just enough distance between the vocals and the listener's ear to lull one into complacency before the inevitable pummeling. And about those vocals: They're in here somewhere, but you'll need a diving helmet to submerge beneath the waves and squalls to figure out what Suen is shouting. The fuzzy, furious "Tectonic Breath" might be the band's best work on the LP, with the shouted slogan "back to zero!" coming through amid sharply punctuated guitar lines and continual pop of Hess' tight snare drum. With nine songs and seventeen minutes worth of music, Spelling Bee knows not to overstay its welcome.

Caterwaul can, at times, earn its title through both abrasiveness and minimal distinction from track to track. But these songs are never just noise without direction or purpose, and diving the internal logic of each track and wading through the static make it worthwhile.