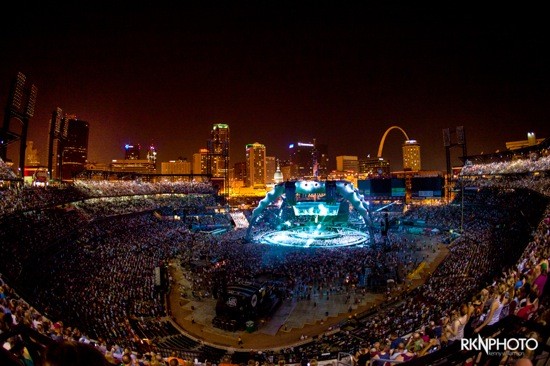 Earlier, we introduced you to our ten favorite concert photographers in St. Louis. We got well over fifty nominations, and our judges narrowed the field to these ten folks. Over the coming week-plus, we'll be introducing you to each of the finalists in turn by having them share with you five of their favorite concert photos and answering a few questions about their process and passion. Up next (and finally!) is Kenny Williamson, whose work can be viewed (and purchased) from his web site, www.rknphoto.com.

Kenny Williamson: 'Great' is rare. 'Great' is capturing a unique moment, that has never been seen, hasn't happened before with the artist, and likely will never happen again, which people will remember from the image for decades. This has happened to me several times, but unfortunately the camera was out of focus, I had the lens cap on, or a security guards head was in my way when the moment happened.. still waiting for my Great one.

Nothing else but a live music performance can bring 20,000 people from different walks of life, together, all on the same page, all at the same time. From a photography perspective, all emotions are firing on all cylinders. I am a music fan first, so being this close to the artist in the photo pit is already a natural rush. Then add to that, I'm there doing what I love to do, trying to get the best shots I can get in a 3 song span. It can be tough sometimes when I'm shooting a band I really like, to stay focused on what I'm doing.

Thankfully, nothing 'too' strange. I always laugh when I think about shooting Motley Crue's Carnival of Sins Tour. We were allowed the pit, first two songs. The show opened with dancers, circus acts, visually great stuff. Just before the band took the stage, pyro went off, fire, smoke filled the stage so thick I couldn't see the end of my arm. The band played, I heard them although I couldn't see them. I think by song 4 it cleared up enough to see the stage, but by then I was already out of the photo pit, with 0 useable images to speak of.

Instinct, timing, patience to wait for the shot, respecting the artist, and the fans in the front row to not be a distraction. But the # 1 separation is probably what images we choose to show. Regardless if I shoot 50 or 300 images of a single performance, I will show only 10-15, sometimes less (is more). 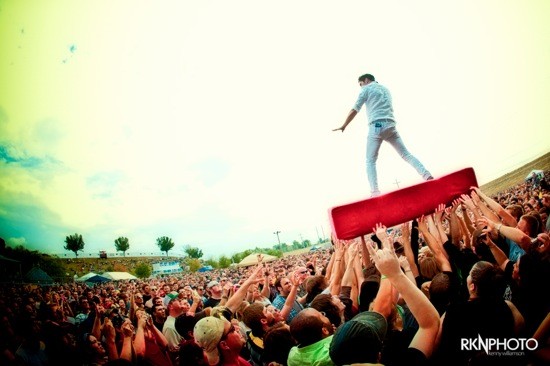 I have shot this band several times, nothing is predictable with these guys. Prior to their set, lead singer 'Moon' told me he was going to do something that will blow people's minds. All he said was he was going to surf the crowd on a red sofa. Not knowing exactly what to expect, I positioned myself in the pit as always, thinking when this happens, he'll only go out about 10 feet. About the third song, the band played 'Put Your Hands On Me', and sure enough, Moon mounted a red futon cushion, and proceeded to float atop the outdoor crowd approximately 75 yards, the whole time singing, not missing a single beat or lyric. I think I covered a quarter of a mile running to each end of the crowd, side to side, front to back, capturing different angles from this great moment. The shot you see, was at the beginning and was one of the first shots from the sequence. I leaned over the pit rail, near the stage, to give the illusion I was in the crowd to show that perspective. 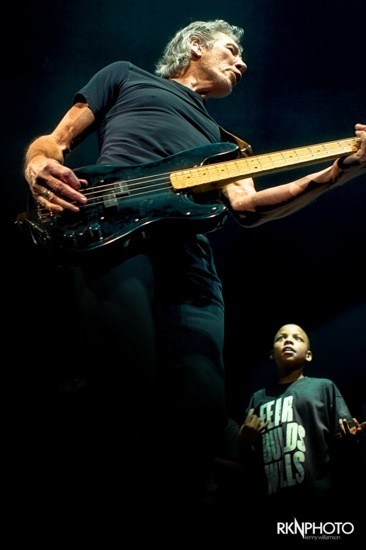