The Six Best Boring Albums Of 2012 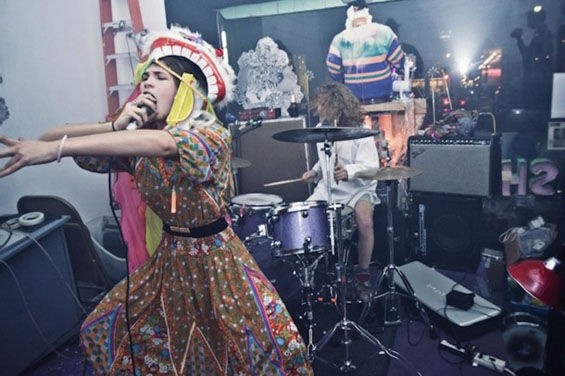 If "best" and "boring" seem contradictory, please know there's no irony or negativity intended in this list. Maybe some irony, as I am poking some fun at the perception that any song over four minutes long, any piece of music built on repetition, anything that requires patience of any form from a listener is inherently boring. Here are the six best "boring" records of 2012. Let us know your favorites in the commentzzzzzzzzzzz......Sorry, dozed off for a second.

See also: -The Six Sweetest Riffs Of 2012 -The Top Five Notes on My Bass Guitar -The value of expanding your musical horizons

6. Guardian Alien - See The World Given A One Love Entity Guardian Alien is a Brooklyn group led by dangerously proficient drummer Greg Fox, formerly of Liturgy, and See The World Given A One Love Entity is an album of loosely structured psychedelia. The album's single track is thirty-seven minutes long and based around a single droning chord. Fox leads the group into distinct movements - the blast-beat intro, the tribal section, the quasi-composed uttering of the album title, the midtempo rock ending - but the whole thing is one enormous, sometimes transformative exercise in zoning out.

5. Dustin Wong - Dreams Say, View, Create, Shadow Leads Dreams Say, View, Create, Shadow Leads is the best album of 2012 that could feasibly be performed at the pedal demo section of any Guitar Center. Using loopers and delays and (probably) a flanger or two, Ponytail guitarist Dustin Wong dogpiles Steve Reich-esque melodies in thick layers, creating dense but brief scenes. The format is formulaic, as each track on Dreams opens with a single repeating melody that grows limbs throughout its running time and cuts sharply into the next. For an album full of technological trickery, the old-school element of surprise at each song's end is Wong's best move, like a splash of cold water in the face after settling into a warm, vivid sleep. 4. Godspeed You! Black Emperor - Don't Bend, Ascend! The fact that the always cryptic Godspeed You! Black Emperor even made an album in 2012 is a surprise. The timing of Don't Bend, Ascend! couldn't be better, since the instrumental, dramatic sound the band helped pioneer ten years ago is experiencing either a revival or (in fitting post-rock fashion) the climax of a long, ten-year build. Today's post-rockers are rarely as extreme as on the Sonic Youth raga of opener "Miladic" or as patient as the ambient "Strung Like Lights At Thee Printemps Erable." Don't Bend is more of a reintroduction than a reinvention, giving listeners the opportunity to distinguish between the myth of Godspeed and its actual music - and to listen to the band's back catalog with a fresh perspective.

3. Earth - Angels Of Darkness, Demons Of Light Pt. II If you've heard of but never heard doom-metal legend Earth, the Seattle band's Angels Of Darkness, Demons Of Light Part II will not be the introduction you expect. This is not an album of slowed-down Sabbath riffs or distorted dirges; Angels' closest comparison is the desolate spaghetti-Western pseudo jazz of guitarist Bill Frisell. As a hyperfocusing experience, listening to Angels reveals a wealth of sonic joys, like the subtle clanking in the background of "His Teeth Old Brightly Shone" or how far behind the beat drummer Adrienne Davies lands her snare throughout "A Multiplicity Of Doors." As background music, Angels makes everything you do feel incredibly significant.

2. Four Tet - Pink Kieran Hebden consistently makes interesting electronic music under the name Four Tet, frequently combining the organic and synthetic. Pink is a collection of various 12" singles Hebden released of more traditional, longform, repetitive dance tracks. Unlike usual Four Tet tracks, there are fewer dramatic mid-song changes. The rewards are linear, like the gradual speed up of "Locked" or the way "Peace For Earth" morphs from an ambient Eno track to a bleepy Terry Riley track. Some electronic music fanatics have expressed skepticism of Hebden, as if he snuck into the scene through a back door of indie rock. Pink comes off as his way of proving just how well he can play the EDM game too. 1. Caspian - Waking Season The current dynamics of post-rock (and not the quiet/loud kind) are as such: an old-school band like Godspeed has to prove its continued relevance and a relative young gun like Caspian has to justify its existence. Caspian succeeded with Waking Season. The same people hear a band like Explosions In The Sky and think, "I can do that," should be intimidated by Waking Season. The Massachusetts band just does everything right, from the twinkly clean ("Akiko") to the eerily spare ("Collider In Blue") to the super heavy (the killer middle section of "Gone In Bloom And Bough"). Additionally, Waking Season is the best sounding record that workhorse producer Matt Bayles has made since Minus The Bear's 2007 album Planet Of Ice. Caspian's record is only boring on paper - "Great live post-rock band makes album with notoriously hi-fi producer." Listening to Waking Season will make you realize how carelessly the word "epic" is thrown around these days.