The Tedium of Rock & Roll: Bo and the Locomotive Finish Work at Native Sound 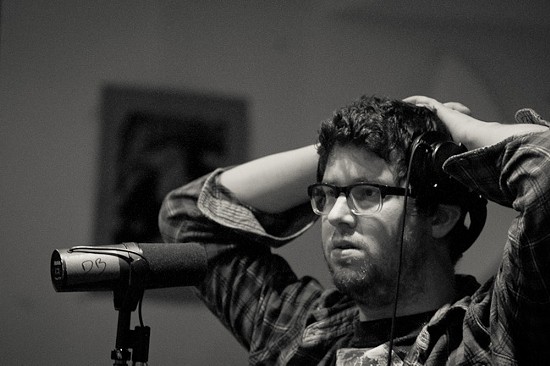 It's Saturday and Bo Bulawsky and Steven Colbert thumb their Hill Climb Racing cars ahead on a smartphone and iPad, respectively. They lounge on a boxy, plaid couch in the rear nook of the Native Sound recording studio while Andy Arato stands in the center of the room overdubbing a bass line to a song they're provisionally calling "Cook" for a full-length album they're probably calling It's All Down Here From Here for now, tentatively, maybe.

See also: -Standing Room Only: Thursday Nights at Blues City Deli -Clownvis Presley Prepares in the Green Room at the Firebird: A Paint Story -MP3 stands for Monkey Paws: In the KDHX Studio with Gabriel

This is the final day of Bo & The Locomotive's six-day-and-night recording session with David Beeman (Old Lights, Née), who's engineering the record and part-owns the studio. 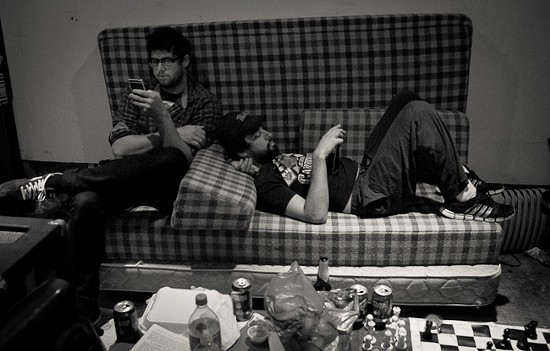 The guys--Bulawsky, Colbert, Arato and Evan O'Neal--are exhausted. They've spent almost fourteen hours each day at the studio. One of them tells Colbert he looks worse than usual today. He feels worse, too, he says.

The recording process, while thrilling at times, is rarely as glamorous or idyllic as imagined by those who haven't experienced it, especially near the end. The overdub process (re-recording imperfect parts, layering vocals and adding sonic textures) requires a nitpicking ear, patience and the readiness of a bullpen pitcher--do your job quickly and step aside for the next guy. There is little rhythm. It's far from a live-show experience.

The bass is a little pitchy during the bridge when Arato slides up the neck, they decide. The instrument's intonation must be off. Arato needs to do it again, but lower on the fretboard this time. O'Neal, straddling the bench of a Hammond T-212 organ, is up next.

It's about 70 degrees outside. Kids ride their bikes down Cherokee Street; others lick ice cream. It's gorgeous.

Inside the one-room studio, overhead lights shine on metal sound equipment that is cool to the touch. The space is windowless. The only green here, bouquets of fake flowers, hangs upside-down from the high ceilings.

Bulawsky says he wanted to take "an escapist approach" to creating the full-length album, the band's second, following 2011's On My Way. The original idea was for the band to move into a cabin north of the city for a week and record there. The cabin fell through, but "save for going home and going asleep, we've been here pretty much till 2 a.m., then getting back at 11 or 12 the next day," says Bulawsky.

By the end of the day, they finish tracking three more songs. The record is 11 songs long. It won't be finished by tonight. In actuality, tracking won't be finished till almost a month later. It'll likely be released sometime this spring, says O'Neal.

By 10 p.m., most of the band members have left, unable to get off work another night, but Bulawsky and Beeman are still here. Bulawsky stands in front of a vocal microphone where Arato stood earlier. He sings at phone-conversation volume, focusing to enunciate for clarity and harness genuine inflection. There are many attempts.

Eventually, they reach the final verse of an untitled song. Bulawsky says he still needs to finish some lyrics.

"A little lyrics or a lot of lyrics?" Beeman asks. Another verse. Beeman says he's going to walk down the street to Fortune Teller Bar for a quick drink and give Bulawsky time to think.

Bulawsky returns to the boxy, plaid couch with a leather-bound notebook. He sits quietly and hunches over the page.

Lining the walls and clustering around support beams are stacks and rows of amplifiers, keyboards, guitars, drums, effects boards, mixers--a cacophony of potential sound. The loudest moments of an album, though, are often recorded silently. 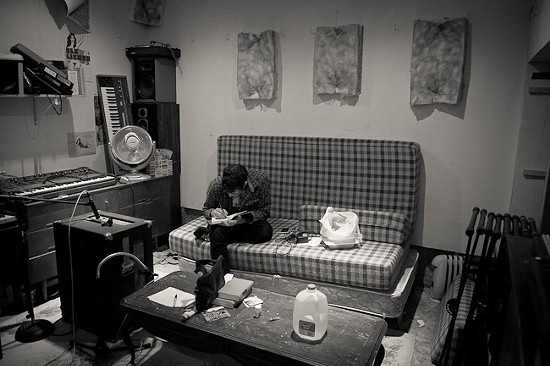