The Most Overachieving People to Ever Form a Band: Talulah Gosh 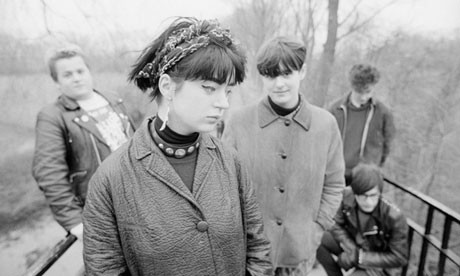 When word leaked out this week that Elizabeth Price won the 2012 Turner Prize, an annual honor given to British visual artists - some eagle-eyed readers noticed that she'd previously been involved in the UK indie music scene. In the mid-1980s, Price attended Oxford University, where she met fellow student Amelia Fletcher and helped form the band Talulah Gosh. Both praised and damned as "twee," Talulah Gosh's short, raucous and deadly catchy pop songs wonderfully split the distance between the Shangri-Las and the Jesus and Mary Chain.

But if anyone was surprised that this former crash-pop crooner would turn up winning a prestigious award in another field, they were simply not paying attention. Member by member, Talulah Gosh may have been the biggest group of overachievers in history, giving even fellow Oxonians Radiohead some serious competition. Not in terms of record sales: Talulah Gosh achieved some notoriety in the U.K., but was always a cult favorite here in the States. Indeed, the band never made it to America until Price left to form The Carousel, and the other members regrouped as Heavenly. But each band member has excelled in other fields, from media to economics. It turns out that Talulah Gosh was, in its own microcosmic way, a band of Brian Mays.

Besides Price, here's the classic Talulah Gosh lineup. While you're reading, please enjoy the band's theme song via YouTube.

While leading Heavenly, Fletcher was simultaneously working toward a economics degree at Oxford. She completed her degree in 1993 and worked as a consultant before joining the Office of Fair Trading in 2001. She became the chief economist in 2008. Dr. Fletcher has continued to pursue a low-key music career despite this pedigree, going on to form Marine Research and her current project, Tender Trap. 2) Rob Pursey: bass Day job: Television producer The only other permanent member of Tender Trap besides Amelia, and partners from way back when (they have two children together), Pursey has worked in the field of TV production and direction since the early 1990s. His IMDB page lists numerous productions for the BBC, ITV and other British television.

3) Mathew Fletcher: drums Former day job: Editor, Oxford English Dictionary Amelia's brother played in Talulah Gosh and Heavenly before committing suicide in 1996. Before his sad passing, however, he worked as an editor for the Oxford English Dictionary. Rumor has it that he was, in fact, responsible for adding the word "motherfucker" to the OED. Think about that next time you hear "Kick Out The Jams," The Chronic or Sun Ra's "Nuclear War."

4) Peter Momtchiloff: lead guitar Day job: Senior Commissioning Editor, Philosophy, Oxford University Press Like Mathew Fletcher, this feedback-happy guitarist established a career in and around Oxford University. As the senior commissioning editor for Oxford University Press' philosophy department, he endeavors to publish the works of "eminent philosophers from America, Britain, Europe, and Australasia," for both academia and general audiences. Meanwhile, he was a key member of both Heavenly and Marine Research. More recently, he's collaborated with Bid, the leader of early-80s suave postpunkers the Monochrome Set, in the band Scarlet's Well. He remains a member of the Would-Be-Goods, whose Jessica Griffin writes some of the wittiest, most cutting lyrics this side of Jarvis Cocker. Bonus: Cathy Rogers: vocalist, Heavenly Day jobs: Television host, olive farmer and author Talulah Gosh sang about a "Testcard Girl." However, it was Rogers, the only Heavenly member not in the previous band, who went on to a career in front of the screen. A BBC producer in the early 1990s, she took a job at RDF Media in 1995 and went on to produce and narrate the program known as Junkyard Wars in the U.S. In 2001, she moved to Los Angeles, and produced such shows as Wife Swap (!) for RDF. Later in the decade, she bought an olive grove in Italy with partner Jason Gibb, and wrote a book, The Dolce Vita Diaries, about the experience.