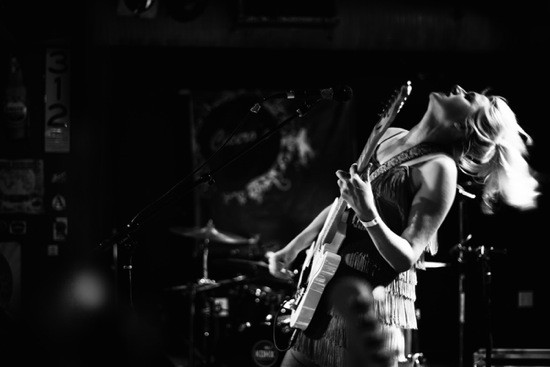 Earlier, we introduced you to our ten favorite concert photographers in St. Louis. We got well over fifty nominations, and our judges narrowed the field to these ten folks. Over the coming week-plus, we'll be introducing you to each of the finalists in turn by having them share with you five of their favorite concert photos and answering a few questions about their process and passion. Up next is Bryan Sutter -- former house photographer at the Firebird -- whose work can be viewed (and purchased) from his web site, www.ishotguydebord.com.

Bryan Sutter: Without giving it too much thought, at least 800. I shot almost every night for two years when I was working with The Firebird.

I think a lot of people would say that capturing the moment makes a great concert photo, and they are largely correct. People can point out a great photo when they see it. However, for the photographer I feel that it is important to not have very strong preferences when shooting. Sometimes the lighting is just right where you can capture a certain detail or action in a way that is really pleasing and descriptive. Other times, a photo of the crowd from the back of the room, while nothing that is particularly exciting is happening on stage, can tell just as much.

There are a lot of great things about live music. Sometimes it's a pretty simple affair, though. You go to the show, buy a drink, see the show, maybe buy a shirt or LP and then you go home and maybe one day you'll die. Sometimes a show can be more engaging affair, something closer to an idea exchange. Either you have a conversation with someone or there's a song that really clicks. Maybe there's some instrumentation that really inspires you. Or another person attending. Those are, perhaps, some of the more exciting and stimulating surprises you can have in the presence of live music.

I've found myself in some interesting situations, from angry drunk people lunging at my camera because I won't let them play photographer with my equipment to a hundred or so sincerely strange and angry people rushing the stage at The Firebird during Machine Gun Kelly's set. However, I would say what's left the longest lasting impression was during the Black Lips' set at The Firebird in April 2010 when two very out of place looking middle aged women berated me for turning away from guitarist Cole Alexander when he unbuttoned his pants while on stage. I was successfully pressured into turning back around by these two ladies and I was met with something I'd never seen before and will probably never see again.

The inner fear was that Cole was going to do something involving bodily fluids but in reality he was, well, aggressively scraping the tip of his penis against the fretboard of his guitar, which he had flipped around so the guitar faced his midsection. You could hear it over the PA. This short, sort of muted scraping sound.

I don't think he stole that one from Chuck Berry.

Traditionally, when you think of someone as a professional you imagine certain standards when it comes to their work, presentation, and their business sense. Locally, there are music photographers who are professional in the traditional way and those who I would consider to be professional in a way that hasn't been completely defined. Technology and the increasing importance of the digital world in our day to day lives has spread photography greatly and evened the playing field for people to participate. Functional photography is no longer a scarce resource and as this becomes more apparent, we'll likely see the definition of professional change. Perhaps professional will just as easily apply to folks who shoot indie bands for their own blog as it does those who shoot Red Hot Chili Peppers for Spin. It's possible that things will matter less about your tear sheets or who your clients are and more about your output, drive and ability to convey the experiences of others as well as your own. We'll see what happens in the next few years.

Amateur photographers in the world of live music photography, however, will always be the people that shoot with flash. I can all but promise that won't change. 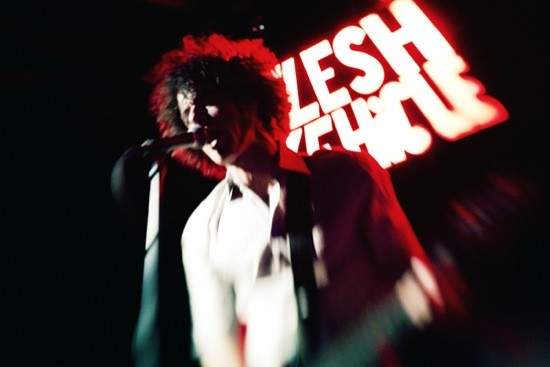 I'll probably get some trouble for submitting this photo as it doesn't exactly express the photojournalist side of live music photography but I don't ever expect to take The Soiling of Old Glory Part II, so I'll talk about it. This one is from the early days of The Firebird and features Flesh Vehicle. Flesh Vehicle are a garage rock trio from Nashville and are probably best known for being fronted by Tom Pappas from Superchunk. They are rad. They have a rad neon sign with their band name that they put on stage, as you can see. This photo of Tom Pappas was taken with a Lensbaby Composer, which is a selective focus lens where you can change out the internal optic to different types of glass. Selective focus means that I can isolate the part of the frame that will be in focus, while the rest of the frame is not. The focus is a bit off and I lost some detail with a longer shutter speed but this was one of the first shots I took that I knew I had something really interesting when I previewed it on the back of my camera. Sometimes it's good to have something a little different in your camera bag.