Before the Thanksgiving break, we introduced you to our ten favorite concert photographers in St. Louis. We got well over fifty nominations, and our judges narrowed the field to these ten folks. Over the coming week-plus, we'll be introducing you to each of the finalists in turn by having them share with you five of their favorite concert photos and answering a few questions about their process and passion. This week is Nate Burrell, whose work can be viewed (and purchased) at his web site, www.beforetheblink.com.

I am not exactly sure how many actual concerts I have shot, but since moving to St. Louis 3.5 years ago I have taking photographs of 300+ bands. That includes headliners, opening acts, and multi day music festivals- which often allows you to shoot 15-25 bands in a long weekend.

There are so many ways a photographer can capture a great concert photo in his/her lens. Sometimes it can be catching the "money shot" where the lead singer, guitarist, or other band member is photographed in an extremely theatrical or action oriented movement. Other times, the photograph is full of numerous subtleties that are not reproducible such as facial expressions, the way the lens grabs the light, or capturing performers interacting with the crowd. I tend to like those moments that happen in bewteen when the artist is displaying a bit of the "iconic" presence, as well as unknowingly showing non rehearsed and honest human imperfections. 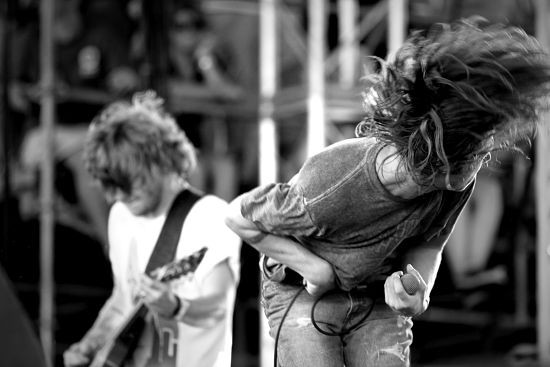 Without a doubt, for me, the best thing about a live show is that it is happening in the here and now...in real time. Each show you see is a completely unique experience that will never happen again as it did the night you were there in the crowd, or in the photo pit. It's a combination of music and performance that, even though the musicians have rehearsed many times, things can still go sideways in a hurry. People often forget that; we expect the performers to be spot on every night, but in all reality things like broken strings, faulty lighting, or a number of other possibilities can cause the artists to have to react on the fly...and for me, those moments of unpredicatability are what helps add a beautiful uniqueness that only those in the venue were lucky enough to be a part of.

Being in the pit, photographers tend to see a bunch of wild things on the stage, as well as from those die hard fans who showed up early to make sure they were in the front row. Recently I was at the Pageant and I had a relatively inebriated fella pull up his shirt and start shaking his belly all around. He was doing this funny drunken dance like he was barefoot on hot coals and he was practically begging me to take a photo of his torso, because as he said "music make EVERYBODY move, baby!" Pretty odd behavior for a middle aged man, but funny nonetheless.

I'm not exactly sure that there is a definitive measure(s) that determines what is professional versus amateur; it's pretty relative, just like trying to define what is good or not so good art. With that said, however, I do think there there are certain attributes that help show that a photographer has more experience and understanding than some of his or her peers. Things like being able to consistently deliver high quality images that accurately portray the concert or scene, understanding how to conduct yourself respectfully to the performers and the other photographers you are shooting with, and being able to adapt any venue you are shooting and come away with a set of quality images....it's those types of things I think may set some photographers apart from others.

I shot Iggy and The Stooges at Austin City Limits Music Festival earlier in 2012 and it was something else I must say. Knowing that Iggy is not afraid to ruffle feathers and push the limits a bit, but also realizing he is no longer his younger self, I wasn't quite sure what to expect. I was in the pit with 40 other photographers and we all got filtered to one side of the stage and had only two songs to shoot, so we were literally stepping on, over, and around each other trying to get our shots. This particular image captured Iggy trying to incite mayhem from the crowd. He had just finished running across the stage and stopped just to my left and began taunting the folks in the front rows- yelling that they should be kicking down the barricade and storming the stage. He was preaching and pleading and shouting and swearing; just absolutely challenging a younger generation to break the rules ...It was rock and roll.