Welcome to Blank Space: Here's What It's About 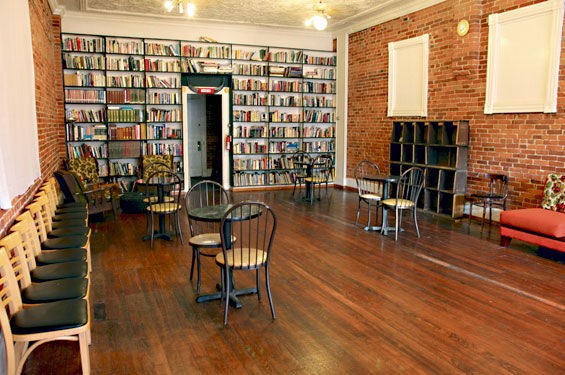 Blank Space dove into existence head-first, with mastermind Kaveh Razani eager to let the building evolve naturally into its role. You'd be forgiven for finding that a confusing approach -- it certainly became that way for Razani as he navigates the codes and regulations to make sure his "venue + gallery + reading room" is operating legally. But he -- and the others involved in the project -- are getting close now. Brian Heffernan detailed the short but dense history of Blank Space in this week's print feature. In it, Razani says, "If you really dig into this with an unconventional space, with an unconventional idea, you'll find that there is very little precedent set for that in the legal process."

Choose Your Adventure: Blank Space is Clearing the Roadblocks by Brian Heffernan

Blank Space made another significant step toward its funding goals earlier this month when it won a SLOUP grant. Here's the proposal Razani submitted to the crowd-funded and democratically awarded SLOUP:

1.Blank Space is an experiment intended to succinctly codify the process of developing a grassroots creative space from the ground up. Meaning, we want to figure out how this shit works.

2.The very evolution of Blank Space is an intentional exploration into the relative void of community development within an ETHICAL FRAMEWORK. Think anti-gentrification, if you will. ... ... ... ...

1. There is so often a tragically temporary characteristic with DIY venues. They are not often expected to last. The tragedy of this is that the purpose or contribution of such spaces becomes (temporarily) lost when the space itself is lost. What was once an avenue for creative expression/manifestation disappears ... and sweet memory is the final domain of what were once evolutionary human interactions. People who once had a space to connect with something (... anything ...) find their cultural havens deforested. We at Blank Space believe that the paradigm of a DIY venue with a short life expectancy does not need to be the case. While there is a certain romanticism in the spark that burns itself out, we have found that a stable, above ground, SANCTIONED creative space enhances the stability and accessibility and growth of everything that takes shape within it. Anything whose natural urge is to grow can do so with the necessary resources. That is one small part of what Blank Space aims to be: a nutrient to ideation, without the fear and chaos of bankruptcy.

2. Another existing paradigm in the vast realm of development (in the "urban revitalization" sense) is the lack of accountability to a code of ethics. If an entrepreneur or government body or corporation gets it in their head to "build" something, their primary limiting reactant is money. When that reactant is not limited, there is virtually nothing that stands in the way of the building of a bank or a supermarket or a liquor store or a DIY venue. While the relevance and contributions of some spaces are hard to challenge, the basic self determination of a community - whether that community is one of geography or affinity -- to decide how their community develops is removed from the equation. One party's will and pocketbook determine the lay of the land.

At Blank Space we believe in a universal right to self determination. We believe in development and entrepreneurship and commerce (duhhh, we're humans that live in a society too), but we are interested in the outcome of facilitating a space that evolves and develops with the input of the people that populate it, rather than a static vision that in its one-sidedness runs the risk of contributing to systemic oppression. We believe that there exists a path that marries innovation and social responsibility, and we want to use ourselves as test subject.

Blank Space is currently a business-in-the-making. On January 1st, 2012, we moved into a commercial building at 2847 Cherokee Street. Since the day after, we began inviting people in to tell us what they could see happening in the space. It became clear from the beginning that instead of manifesting one or a group of ideas about the destiny of the building, we could serve almost all of the ideas by being equipped for almost anything. Thus, what is now in part a gallery + event venue + reading room + record store + internet cafe + open creative space came into existence. We have been open on an event by event basis, as our patrons approach us with cool shit to do.

What we hope to do in the further evolution of Blank Space is to develop a roadmap that can serve as a working guide through the legal and bureaucratic processes that any individual or group must go through to establish a business. St. Louis City does not make it easy on entrepreneurs to find the existing resources and guidance to make their ideas reality. Blank Space is a victim of this convoluted process: unforeseen (but legally necessary) construction, application fees, licenses and permits have all set our official opening back.

Once we open, we hope to further our investigation of the ethics of community development more formally. Blank Space is already intrinsically linked to the Regional Arts Commission's graduate-level thesis fellowship called TIGER (The Institute's Graduate Education and Research fellowship). With the mentorship of the faculty and staff of the RAC and TIGER cofellows, a thesis on the subject of ethical community development is being compiled.

Last Hurrah This Friday -- Black Friday -- Blank Space will be open to the public daily. While we do not yet have all of the necessary paperwork do so officially, every contributor to this space has committed to giving their all to completing all the necessary red tape by Thanksgiving. The contribution of Sloup would go towards the $1060 still needed to sign ourselves into official existence. ... ... ... ...

Post Script Blank Space has served as a catalyst for so many impromptu creative collaborations that the answer to the final question of this application (what about the creation of art that you've seen/ heard recently have you embraced?) was simple: we see the cosmic seeds of art planted on aweekly basis. The human lives that are lived every moment, that inform and inspire the planting are what is most real to us. The connections between the PEOPLE that make art are what we care most about.