Out Every Night: The Best Shows From November 26 to December 2

Lots of local love on this week's list (nothing wrong with that, of course), as now that Thanksgiving is behind us the major touring season is officially over. Luckily St. Louis is packed with great bands and local talent, as you already know, so I suspect we'll weather the drought with ease. To be sure that we at the RFT know about YOUR shows, please review this handy instructional guide.

The touring acts that are listed below are especially notable this week, it should be added. The inimitable King Kahn & BBQ Show will be at Off Broadway on Friday, Kinky Friedman comes through on Saturday, and headlining the Mathias & the Pirates show on Thursday is Rhymesayers artist Blueprint. The rest of our picks follow.

Soulard Blues Band Mon., 9:00 p.m. November 26 @ Broadway Oyster Bar - $5 By RFT Staff The Soulard Blues Band has had a remarkable run as one of St. Louis' most durable and popular blues acts. Fans have stuck with them through many personnel changes and stylistic shifts, and their continued patronage has always been rewarded by a fine crew of singers and players assembled by bassist, bandleader and sole founding member Art Dwyer. The current edition of the band more than lives up to its hard-earned reputation.

DJ Mahf Tues., 10:00 p.m. November 27 @ Pin-Up Bowl - Free By RFT Staff First things first: DJ Mahf is not "just another DJ." He proved himself a bona fide turntablist when he went head-to-head with some of the nation's best DJs for the 2010 Red Bull Thre3style Competition -- where he took the St. Louis title. He's also shown that he's a capable producer with his mixtape series Homemade Junk and Press Play at Night. And when he's not out touring with Steddy P, he makes time to spin records all over town.

Aaron Kamm & The One Drops Wed., 9:00 p.m. November 28 @ 2720 Cherokee - $5 By RFT Staff Stylistically Aaron Kamm and the One Drops does not conform to the jam-band template pioneered by the Dead and Phish; instead, the band's reggae tendencies and Kamm's expressive melodies put the trio in league with Sublime and the Police. Yet the group has been embraced by the Schwagstock crowd, and there are more similarities than a mutual love for a certain herbal supplement. The band stretches tunes into jazz-informed improvised territories beyond the seven-minute mark, and bassist Andy Dorris and drummer Sean Raila make a fascinating rhythm section -- Raila's ghost-notes on live staple "For Today" are particularly impressive. Aaron Kamm and the One Drops can be intellectually stimulating or achieve hippie transcendence, but the group always burns its sacrifices at the altar of the groove. 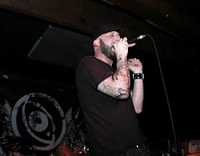 Mathias and the Pirates Thurs., 9:00 p.m. November 29 w/ Blueprint @ The Firebird - $10 By Bob Mcmahon From this 2011 article: Despite the breakup, all the members of Earthworms will stay musically active. Mathias, who released a solo album last year, is readying a new project called Mathias and the Pirates that will feature Ms. Vizion from the GreaTones and a host of other musicians. "What we're doing is we're getting instrumentals with live instruments being added and/or replacing existing parts in mind because we also have Grover Stewart on drums and Mo Eggeston going to be playing the keys for the most part and DJ LB is going to be the primary DJ with Mahf joining in when time allows," Mathias says. The mixture of beats and live instruments will extend to concerts too, depending on who is available to play each night.

The King Khan and BBQ Show Fri., 8:00 p.m. November 30 w/ GONN, The Sights, The Nevermores @ Off Broadway - $12 By Michael Dauphin This could have been one of the best shows of the year back in 2009. Unfortunately, fans who showed up at Off Broadway hoping to see Arish Ahmad Khan ("King Khan") and Mark Sultan ("BBQ") were dealt unfortunate news that the duo -- along with its tour manager, who ultimately took the fall -- were stuck in Kentucky with drug possession charges. Shortly thereafter, the band split up, dashing any hopes for a make-up date. But the band is now back together (for now), stumbling through its brand of doo-wop slop-pop with reckless disregard for anything and everything. Sounds Like: Ever wonder what it would sound like if drug-addled ghosts of the Animals hijacked the AM airwaves and threw a rock & roll party? Me too. I'll see you Friday.

Demonlover Fri., 9:00 p.m. November 30 @ The Heavy Anchor - $5 By Jaime Lees St. Louis has a lot of dudes in bands. Dudes in bands are plentiful. Demonlover is distinctive because it is populated not just by dudes but by true musicians. Andy Lashier, JJ Hamon and Sam Meyer are all diverse multi-instrumentalists and the Demonlover boys make music that is as memorable as it is transcendent. Though the three men are essentially a rock band, the sound they brew is massive and alluring. The music is jazzy but not chaotic. It's trippy but not psychedelic. It's experimental but not tedious. Demonlover is powerful and jubilant and reflects the weird hybrid sound of the new South City scene -- a mutt mixture of rock, twang, beats and noise. Roll the Dice: With this band, every show is different and seemingly better than the last. Check it out if you are looking for something fresh.

Kinky Friedman Sat., 8:00 p.m. December 1 @ Off Broadway - $25/$28 By Roy Kasten Consider Kinky Friedman the bizarro Bob Dylan. He's a Midwestern-born folk hero, steeped in country traditions and gifted with maddening powers of language and wit. The novelist, satirist, songwriter and failed politician made his mark in the '70s with recordings like "They Ain't Makin' Jews Like Jesus Anymore." He's got a bottomless well of one-liners he taps like a modern-day, cigar-chomping Will Rogers, and after decades away from St. Louis, the Kinkster returns for a concert and reading this week.

Burrowss Sat., 9:00 p.m. December 1 w/ Crown, Elk House @ The Heavy Anchor - $5 By Christian Schaeffer Emily Keefauver and Matt Stuttler began playing together in the small but musically fertile community at Greenville College in Illinois. The pair moved to St. Louis and began playing as the Kerouacs a few years ago but chose a more phonetic spelling for their next Beat Generation band name. (Is the extra "s" in Burrowss for "William S."? We may never know.) For Don't Take It Slow, Burrowss tries on a host of rock & roll styles without settling on a single sound, which makes the record sound alternately adventurous and bipolar.

The Stone Sugar Shakedown Sun., 8:00 p.m. December 2 @ Old Rock House - $10 By RFT Staff When the average citizen thinks of jam bands, names like Phish and Widespread Panic come to mind. But Led Zeppelin jammed too, and Stone Sugar Shakedown's blues-steeped explorations tend to resemble the latter. The band sounds and looks transplanted from the 1970s, with hints of the Blues Brothers and Funkadelic, and it doesn't hurt that singer Tracy Gladden can alternately channel Grace Slick and Roberta Flack. It is no surprise that Stone Sugar Shakedown is incredibly active with appearances at clubs and festivals throughout the Midwest. The band is a crowd pleaser; it is sometimes funky, sometimes psychedelic, but it always infuses its tunes with an energy that only true believers in the power of rock can embody.