Update: PETA, of which 90% is just a team dedicated to taking anything that trends on Twitter and figuring out how it can be protested (naked, ideally), has set its (humane) sights on our friend Nicole. They're going to deliver her a Tofurkey, which is a torture no human should endure. The full story (complete with alterante "It's Thanksgiving" lyrics) is on our sister blog, Gut Check.

Remember Rebecca Black? She is the California teenager whose parents paid for their daughter to perform a song called "Friday" in a now-infamous YouTube music video. Black became internet famous overnight, mostly because everyone agreed that it was the worst song they'd ever heard. Black says she cried a lot over this and was tormented to the point where she left her middle school. She even reportedly received death threats.

That has not deterred the folks behind Black's failsess/succailure from offering the same service to other families. Now, a girl from South County appears to be achieving the same result with a new single called "It's Thanksgiving."

Meet Nicole Westbrook, a very pretty 12 year old from Oakville (who now lives in L.A. though her extended family is still in Missouri) who is the latest aspiring artiste to work with Patrice Wilson, the songwriter and producer behind "Friday." Wilson has found a niche for himself producing videos for teenagers dreaming of internet fame with a company called PMW Live. We've reached out to Westbrook's team and are hoping to find out exactly how the partnership was forged. The website advertises open audition days in Miami, but it looks like you can also book an appointment.

In the meantime, check out the video for "It's Thanksgiving." This is a very literal song. It is about the fact that it is Thanksgiving. Westbrook seems pleased about this:

As is clear from the comments and the likes/dislikes, Westbrook is getting almost the exact same treatment that Black got right off the bat. She's also gotten over 5 million views in less than a week, which is on pace with Black's video.

Rather than slobbering at the haterade trough, we're actually fascinated by this process. When the internet universally rose up and dumped all over Rebecca Black, surely it was humiliating. However, the video is approaching 43 million views. Black is now a household name, released a few other songs, and cameoed in a Katy Perry video. Not bad for 15 years old -- but was it worth it? 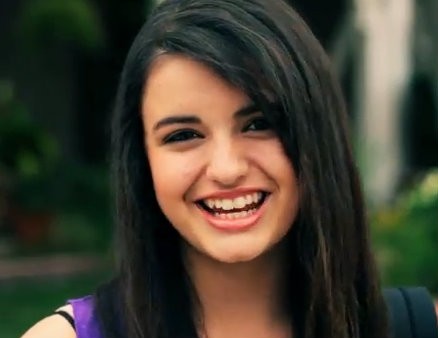 The Blacks told interviewers that the viral spread of the video and the vitriol it inspired shocked them. Do Wilson's new clients, who presumably know the tale, figure they can just handle the backlash? In at least one interview with Good Morning America, Westbrook seems terrifyingly confident for a 12 year old, saying she doesn't care what critics think.

So, a week after the video's release, is Westbrook -- as Huffington Post, Buzzfeed, VH1, USA TODAY, Jezebel say -- truly heir apparent to Black's empire of haters? Let's consider this in "It's Thanksgiving"'s lexicon.

Reasons to be grateful: Here are some reasons Westbrook could get off easier than Black. Westbrook seems more natural in front of the camera, which helps. To our untrained ear, she doesn't sound like she's been Autotuned into oblivion, so she may actually have a nice voice. Because she's 12, and adorable, and singing about her favorite holiday -- as opposed to a teenager crooning about wanting to "parrrrt-eee" -- this could parlay into a squeaky clean gig on the Disney Channel or Nickelodeon.

Reasons to be hateful: As previously mentioned, the internet seems to have already made up its hive mind -- that GMA segment asked "Worst Song Ever?" in the title. And there are parodies. So. Many. Parodies:

None of these are very funny, but you get the idea. People just instantly want to make fun of this song.

Westbrook's single has yet to go live on iTunes, so we'll see if she racks up as many downloads as her predecessor. [Update: The single is now available for download for $.99. It hasn't cracked the top 200, but it's only been a few hours. It's "popularity" rating is at maximum capacity, though it's average rating is 2.5 stars.]