Out Every Night: The Best Shows From November 19 to 25 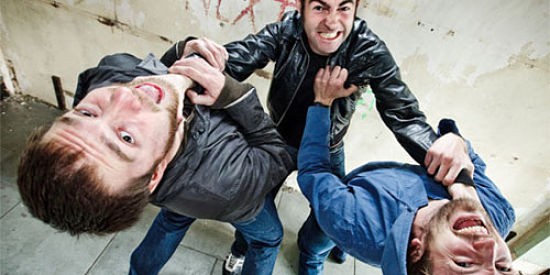 So I do two of these show pick posts per week, one on Monday (which highlights shows for each day of the week) and one on Friday (which lists shows for the weekend). I've explained in this space before that it is sometimes challenging to come up with words to fill these opening paragraphs. Invariably I end up writing about whatever inane crap happens to be on my mind for the first paragraph or two and sometimes treat these posts like a personal online journal. On that note....

Dear Diary: Today I was a little late getting the Out Every Night blog post done on account of my body's hilarious, practical-joke style flatulence (primarily in volume and volume -- both definitions). Every ten minutes or so this morning I've had to take my leave from my desk and venture to unpopulated parts of the office, giggling and ashamed at once, just to spare my close-proximity co-workers from suffering because of my poor dietary decisions. Sorry for the delay, internet. You're welcome for the frequent hikes, co-workers.

So on that note, here's some shows this week! Japandroids will play the Firebird on Tuesday. That "Oh Oh Oh OH Oh Oh Oh Oh" chorus from "The House that Heaven Built" is so ubiquitous in my brain lately that sometimes I think that song is getting overplayed. Then I remember that I'm the one who keeps playing it for myself, so take that for what you will. ((Thorlock)) brings its groove-laden stoner metal back to Lemmon's on Wednesday; Modern Man opens. Future of the Left comes to town on Friday, all the way from Wales! This band is pretty hyped right now in the music blogosphere, for good reason. Lead single "Sheena is a T-Shirt Salesman" from the newest album is a great place to start. The rest of our picks follow.

Joe Pastor Trio Mon., 8:00 p.m. November 19 @ BB's Jazz, Blues & Soups - $5 By Christian Schaeffer The gap between "drummer" and "percussionist" can often seem vast. It's one thing to keep a beat; it's quite another to paint a rhythmic picture with drums, melodic percussion and other sundry items that, in the right hands, can add new dimensions to a song. Local musician Joe Pastor is a capital-p Percussionist: He can certainly keep a groove on the drum kit, as he has done for everyone from jazz and blues players to performers in Branson stage shows. But his dexterity on the vibraphone makes Pastor a rhythmic secret weapon, and Pastor's compositions draw on jazz traditions as well as avant-garde and classical tropes. Back to Front: As a long-time sideman, Pastor has played alongside Javier Mendoza, the late Johnnie Johnson, Kim Massie and the Soulard Blues Band, to name a few.

Japandroids Tues., 8:30 p.m. November 20 @ The Firebird - $15 By Ryan Wasoba From this 2009 show preview: Japandroids' 2009 summer jam, "Young Hearts Spark Fire," is aptly named: As guitarist Brian King and drummer David Prowse shout, "We used to dream/Now we worry about dying," one can imagine the Vancouver duo's adolescent aortas exploding with the awareness of mortality and adult responsibilities. Rather than obsess over the gloom of the sentiments, however, Japandroids satiate "Hearts" -- and the rest of its stunning debut album, Post-Nothing -- with the carpe diem lightness of a coming-of-age teen comedy. Post-Nothing plays like Harold & Kumar Go To Pinkerton, a record charged with muscular power chords, wanton punk beats, everlasting evenings and plots to French-kiss French girls, all performed with the gusto of two preteen pals jamming in the garage, too eager to wait for the bass player to show up.

((Thorlock)) Wed., 10:00 p.m. November 21 w/ Modern Man @ Lemmons - $5 By Daniel Hill Clad head-to-toe in thick black robes and unleashing an aural assault of thick, groove-laden stoner metal, Cape Girardeau's ((Thorlock)) has quickly become a local favorite among DIY rock and metal enthusiasts in St. Louis, often playing alongside Fister, the Lion's Daughter and others in the Pissfork family and releasing a seven-inch on I Hate Punk Rock Records. Citing influence from "Black Sabbath, Black Holes, Black and Milds and Jack Black," the band's wits are as sharp as its Sleep- and Melvins-influenced riffs. ((((Parentheses)))): Blame Sunn O))) for setting the stylized parenthetical precedent, or take the band's explanation for it: Those are sound waves.

Ellen The Felon Thurs., 10:00 p.m. November 22 @ Mangia Italiano - Free By Bob Mcmahon Remember that pianist at your daughter's school's talent show who wowed you with her mastery of styles as disparate as jazzy pop, ballads, tango and country? Well, now that you've gotten past her alternately stirring and lilting voice and her drummer's busy playing, you've noticed her lyrics and are having second thoughts about telling your kid to play with her. Recommended if you like: The Dresden Dolls, Fiona Apple.

Future Of The Left Fri., 8:30 p.m. November 23 w/ The Humanoids, The Livers @ Cicero's - $10/$12 By Jaime Lees Though celebrated as the modern equivalent of the Fall, Future of the Left is slightly less geometric and far more invitingly schizophrenic. Its songs are unpredictable, veering from clunky, sneering mania into refined alterna-noise, all while maintaining hooks and a dark sense of humor. The lyrics can be cuttingly honest and wry but sharply observant, earning Future of the Left high praise as the "Bill Hicks" of bands. Featuring members of Million Dead, Strange News From Another Star and underground indie-hero Mclusky, the Cardiff-based quartet tours the States every few years, bringing with it a commandingly loud and tight show. Bonus: The opening bands are local favorites the Humanoids and the Livers.

The Browncoats Sat., 6:00 p.m. November 24 w/ Fat Tramp Food Stamp, Brown Bottle Fever, ClusterPluck, Elemental Shakedown @ Crack Fox - $5 By Allison Babka If songs about cult sci-fi action heroes gets you going, you'll want to check out the Browncoats. The local band became a bit internet-famous in 2009 with its first video, "The Hero of Canton," an homage to mercenary character "Jayne Cobb" of Joss Whedon's prematurely cancelled 2002 TV show Firefly. While the Browncoats won't win any awards for its simple brand of punk-lite, the band certainly will make you nudge your friend knowingly as you bask in all the not-so-veiled geek references in the lyrics. We Aim to Misbehave: This show doubles as the Crack Fox's third anniversary party and features a rowdy lineup of local talent.

Rickie Lee Jones Sat., 8:00 p.m. November 24 @ Wildey Theatre - $57-$67 By Roy Kasten Withering, estranged and so close to the end of her rope that the singer, Rickie Lee Jones that is, sounds like she's a total goner: That's the sound of The Devil You Know, the 58-year-old hipster-jazz-folk queen's latest album, a collection of familiar rock and pop covers played so quietly and nakedly that it all sounds like the soundtrack to dying alone in the coldest, darkest place on Earth. Jones isn't just deconstructing "Sympathy for the Devil," "The Weight" and "St. James Infirmary"; she's torturing them. But it's still somehow brilliant and mystifying, as she almost always is. Small But Mighty: Jones is currently touring as a trio, with heavy hitters Jeff Pevar (former guitarist for Ray Charles and Wilson Pickett) and Ed Willett (a world-class cellist) backing up her piano and guitar work.s this city offers for a band that marries conservatory smarts into its pop songs.