As the Wii U Launches, What's the Next Great Format for Music?

The Nintendo Wii U launched Sunday, and if you're a certain kind of music geek--the kind who mixed videogame soundtracks and angry-adolescent music in equal numbers on your Winamp playlist, circa 1999--you probably already knew that. It's the first new home game console since late 2006, and a lot is riding on its success--not just for Nintendo, but for the entire industry.

For 40 years the videogame market has been built around "generations" of consoles. Every five years or so you buy a new system from Nintendo or Sony or Microsoft with new graphics and new features, and all your old favorite characters and series are rebooted and remade, and you get the expensive but oddly pleasant feeling of broadening and reaffirming your tastes at the same time.

With computers and phones and set-top boxes all converging, some gaming types are worried this'll be the last time the industry can press that reset button. If they want to know what that future might hold, they need look no further than music, where this last round of enormous box sets might be the last time you ever buy The Beatles' catalogue. What does that mean? 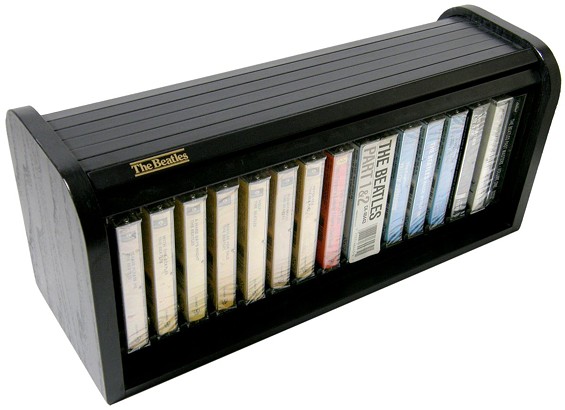 Most obviously, it means you might finally have enough copies of Rubber Soul. CD-quality digital copies of a brand-new remaster are going to last longer than the phones and iPods and car stereos you listen to them on, at least, and at this point they might even outlast the concept of owning individual digital copies of an album.

This is good news. It means you probably won't own a third Yellow Submarine CD, and that the world won't have another obsolete physical stand-in for the music itself to liquidate in garage sales and Goodwills over the next 15 years. You can finally just have the Beatles' catalogue, without worrying about what the package you bought it in looks like, or how it'll sound after a decade of fast-forwarding through "Tomorrow Never Knows."

I won't be out of the woods until they finish rereleasing all the Wings albums, but I'm almost there. MP3s (or lossless CD-audio files, for that matter) aren't perfect, but we finally own the songs and not the media.

But when I realized, shortly before the remasters came out, that I was about to spend a few hundred dollars on a bunch of albums I already owned, I wasn't just pissed off about my own credulity--I was kind of excited about it.

When I buy a new videogame console--and this is as true now, for better or worse, as it was when I was nine--playing videogames is suddenly an event. All the dumb trappings of spending $200 on a box that sits under my TV have some unnameable appeal; the unboxing, the trying angrily to find an HDMI cable lying around, the navigating of the menu, the new-console smell of leeching plastic and bubbling static-cling scratch-guards, the trying to get extended family members to play Wii Sports without fighting each other.

For those next few days franchises I've been playing my entire life feel new and exciting, even when I'm just replaying old levels.

Moving from a Walkman to a Discman to something called an Iomega HipZip to buying music on iTunes, I've felt that same jolt of newness with music I've loved my whole life. Listening to a CD after a few years with a hissing cassette means discovering instruments and harmonies you've never heard, and putting an album you care about into a new piece of equipment creates something new, if only for a moment. It's an excuse to come back to albums you've worn out, literally in a boombox or figuratively after a breakup, without that old baggage.

Both industries will survive the end of format roulette, even if the new models--in-app purchases for games, subscription services for music--prove unsustainable. And I'll find plenty of other excuses to listen to Magical Mystery Tour or play Super Mario World with new ears and eyes.

But after all the time we've spent, over the last decade, fetishizing the vinyl music used to come on and the sleeves it used to come in, I think it's worth coming back to the things we used to play it on, and how they made us experience our favorite albums.