Stand-Up Comedy: It's Like Rock & Roll but with More Assholes 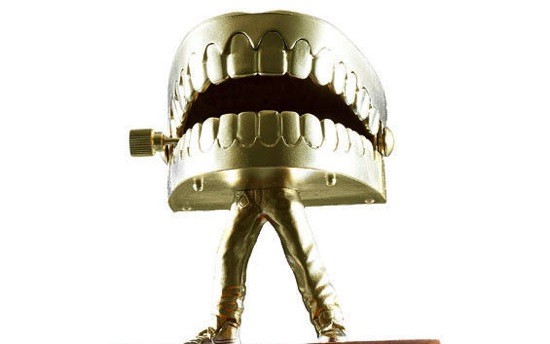 Editor's Note: It's called RFT Music, but our coverage has long extended to the vibrant nightlife scene in St. Louis at large. Starting now, we'll be including stand-up comedy in that umbrella. Look for regular dispatches, first from one Matt Conty, comedian and award winning blogger, (www.wtfatherhood.com). I've asked him to make an introduction of sorts.

If you're new to stand-up comedy, it, like jazz and trans-fat, was invented on our soil. It's American. I love it and plan to spread that joy to you as you put off work in your cubicle. Please accept this blog post as both a virtual handshake from me and a guide for how to act at a comedy show.

On one particular occasion at the Westport Funnybone, I was completely baffled on stage by an audience member who had no intention of being a heckler. In the middle of my new, "I have a baby, and I'm going to talk about it" material block, a woman chose a brief moment of silence to yell out, "The blind lady likes your joke."

My internal dialogue heard "likes your joke" and quickly informed my ego that we had another fan on board. Looks like the new material is dialed... wait, what the fuck did she say to me? I thought to myself, "Either there is a blind lady at this show WHO ALSO has an employee to voice her thoughts at odd times, or there is a blind lady at my show who speaks in the third person, sort of like LeBron James when he was the highly-touted high school athlete."

Either way, not your run-of-the-mill heckle from some drunk fool who is nervous because you are making his girlfriend laugh or a wine-infused comment from a bachelorette party gone awry. (FYI, this happens at 100 percent of all bachelorette parties when a comedy show is involved. 100 percent).

I was stumped. Couldn't she just insult me, so I could deal with it and move on? I decided I better investigate the matter to see what in the world she was talking about. "Are you blind, ma'am?" That's the best I could do.

She then went on to tell me -- and the rest of the paying customers -- that not only was she blind, but she had in fact lost her vision during the delivery of her baby, and that was why she was enjoying my joke about watching a baby being delivered. Ahh. OK. That's clearly what I should have reasoned when you yelled out, "The blind lady likes your joke".

I considering asking, "Did you also lose you're ability to decipher what random shit said out loud could take a comedy show from a roaring good time to more awkward than a stall-to-stall conversation in a public restroom?"

I didn't say that though. I thought it. I'm pretty sure everyone in the room thought it as well, but she was blind, and judging by her laughter and high level of comfort my act had afforded her, she was having a great time and, dare I say, becoming a fan of my humor. I couldn't launch a verbal attack on her. She wasn't a heckler.

This and other random shit being yelled at the stage is what we as stand-up comedians unknowingly signed up for. As in no other form of live entertainment, audience members feel like they can talk back to the entertainer. I'm pretty sure Mick Jaggar never had to interrupt the lyrics of a song to answer the question, "Hey Mick, where are you from man, with an accent like that?" Comics deal with this type of thing all time.

The number one answer a chatty audience member will have for the comic when asked why they disrupted the show? "Dude, I was just helping you out." Nope. Listening, laughing, enjoying the prepared material, drinking and tipping the waitstaff well (their financial success wields more power than one would think.) That's how you help out the comedian. If and only if the comedian speaks to you, then it's OK, in that moment only, to speak out loud to the comedian.

In summary, laughing and money make the comedy club world go around. Dish out plenty of both and you will officially be considered an ally to the comedian. Mainstream fame and success can play a part in how and what an audience member might feel the need to say during a show as well. Jim Florentine, the acclaimed comedian and host of the Comedy Metal Midget Podcast, will be making his annual appearance at the Westport Funnybone from November 15th to 17th.

He considers his experience with the club and the people of St. Louis one of his favorite weeks of the year. "It's a blue collar crowd that knows how to laugh and have a good time." He has always been determined to have a stand-up-first attitude toward his career. This earned him a reputation as one of the better acts in the business, but it has also led to other opportunities in show business.

Florentine is now well known for being the voice of Special Ed on Comedy Central's Crank Yankers, and the host of the VH1's That Metal Show. Jim knows all to well that being recognized for something other than standup can be a mixed blessing. On the one hand it can help your ability to draw an audience and can get your name out to people who wouldn't normally see a stand-up show.

On the other hand it can draw people to a stand-up show that are looking for something completely different, creating obstacles as he delivers his act. "'Are you going to use the puppet or not? I mean, I thought we were going to see the puppet.' There's a 60 year old man in the front row of my comedy show demanding that I do a puppet act while I'm trying to tell jokes," he says.

It's not that Florentine harbors resentment for the success of the TV show or the audience that it created; he just wants his stand-up act to be the focal point at his live show. "I'll do the character because I know people still enjoy it, but people shouldn't think I'm a ventriloquist. If they can't use their imagination for the visual when I'm doing the voice, they've got problems."

On many occasions he gets true fans of his stand-up act coming up to him after a show saying,"Jim, I've been a big fan of your act for a long time. I had no idea you were the Special Ed guy on Crank Yankers." His popularity on That Metal Show can be a mixed bag as well. He's done everything from comedy clubs to opening for 15,000 people in front of Slayer.

Once again it puts him in front of an audience that might not always come to a stand-up show which is a good thing. On some rare occasions, he finds some audience members that didn't come to the show to laugh necessarily. They come to discuss a matter that is near and dear to the their heart with the man they watch discussing it on their TV. Heavy Metal. "Every once in a while you will see these guys roll up to the front row of the show with their Maiden shirts on, then some time during the show they will literally walk on stage while I'm doing my act and say, 'Damn Jim. How can you possibly say that a Judas Priest song was better than a Maiden song? How could you say that?'. I'm like, seriously, do we have to do this now? Can we talk about it after the show?"

Something tells me that Steven Tyler doesn't have to answer for his choices on Idol while hammering out "Sweet Emotion" in an arena somewhere.

If you make a sound decision and decide to go see Jim this weekend, remember to recite these simple words when standing in line outside the club: Listen, Laugh, Drink, Tip.