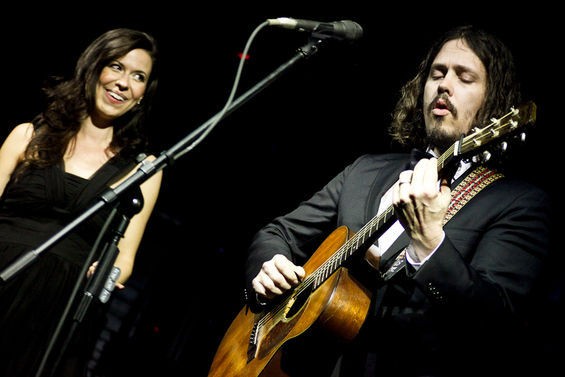 The Civil Wars just posted an announcement on Facebook cancelling all upcoming tour dates due to "internal discord and irreconcilable differences of ambition" -- effectively declaring the end of the band. This is a huge surprise for a duo decidedly on the rise -- fresh off a pair of Grammys and even fresher off an Americana Music Association award for Duo/Group of the year. Joy Williams & John Paul White played together as recently as last month's Austin City Limits festival.

The Nashville-based duo has made two recent stops in St. Louis, both sold out shows. It was the Pageant in January of this year and Old Rock House in April 2011. At the first show, our reviewer saw a rare chemistry between Williams and White, saying:

But as serious as they might seem, the two couldn't help playing around on stage. Even from the first song, Joy Williams was all smiles as the band started the show with "Tip of My Tongue". Occasionally, White would sneak up and sing over William's shoulder, and she had to fight back laughter.

Evidently that magic has since worn well off, although this news comes with little warning -- reports from the band's set in mid-October in Austin suggested nothing out of the ordinary. Pollstar started reporting the tour cancellations last Friday, referring to a different post on the band's Facebook page that has since been taken down.

We sincerely apologize for the canceling of all of our tour dates. It is something we deeply regret. However, due to internal discord and irreconcilable differences of ambition we are unable to continue as a touring entity at this time. We thank each and every one of you for your amazing love & support. Our sincere hope is to have new music for you in 2013.

PS - We understand that there are many of you stuck with service charges and travel reservations due to our abrupt cancelations. Please email us at info@thecivilwars.comif there are costs incurred that you would like to be reimbursed for, include a scan or attachment to your receipt(s) of the costs, and we will do our best to reimburse you for non-refundable charges.

This certainly doesn't mean the end of the Civil Wars, forever -- the language in the announcement allows that they might still record together, and if they were to bury the hatchet completely and tour again in the future, that would hardly be without precedent in pop music. Their final recording together (for now) was a cover of "I Heard the Bells on Christmas Day," which came out last week as part of a Holidays Rule compilation also featuring Paul McCartney, the Shins, Fun. and more. Listen to a snippet that song and watch the video for "Poison & Wine," the title track from the Civil Wars' first EP, on the next page. We're generally very opposed to pre-Thanksgiving Christmas music, but this qualifies as extenuating circumstances: