The Swayback Returns to St. Louis: Here's What You Should Know 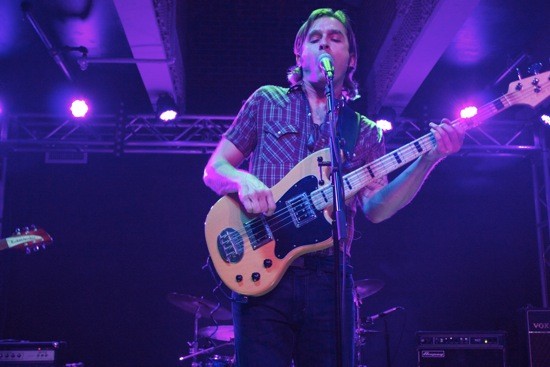 The Swayback is currently on the back half of one of the biggest tours in its ten year history. The first leg brought the Denver rock & roll band to Plush for its first-ever St. Louis show, on the night of a Cardinals playoff game. You can imagine how that went. I went mostly because I wanted to see opener Burrowss, whose debut has scarcely left my CD player since it came out in May. But I stayed for the Swayback, who I had seen once or twice when I was living in their hometown. It was an impressive performance, especially for a band on tour in a new city playing to basically no one: Front man Eric Halborg and his crew were energetic and engaged, with a set full of big hooks and clever lyrics. They have only gotten better -- markedly better -- in the years since I last saw them. I'm not alone in that opinion; part of their recently-released Double Four Time was recorded by the legendary Andy Johns, whose work you may know from such bands as all the most famous ones.

You get another chance to see the Swayback now that baseball is over. The band is back in town tonight, opening for the Fresh & Onlys along with Troubadour Dali and Admirals at the Firebird. Doors are at 7:30 and tickets are $10. I recently spoke with Halborg via email about the evolution of his band, CMJ and playing new cities. Important note: We did this interview before Sandy, so factor that in while you're reading the stuff about New York -- he wasn't being willfully ignorant or anything.

How is the tour going? How was CMJ?

Tour is going great. We are back in Denver for two days, played with Fresh & Onlys last night and we head with them to Lawrence Kansas tomorrow morning. CMJ was rad. Love playing in New York. It's got creative energies coming from all directions, really good food, and late night dancing in sweaty cavernous clubs. We certainly let ourselves get caught up in the city's energies this tour and were pleasantly pulled deep down it's rabbit hole.

On the flip side we had two chill days up in Hudson, NY before CMJ where we got to hang out with our friend Melisa Auf De Maur from Hole and check out her huge new art space/venue/recording studio. Tour is great when you get a balance like that where you can get wild in the city and then retreat to the country and have a few mellow days to really experience a new town.

What's the most valuable thing you've learned so far on this tour?

Might sound odd but we've been listening to a book on tape in the van called The Vortex. It's talking about how your thoughts and your intentions can directly manifest your reality. A valuable mindset indeed. I've also learned how much I really enjoy sleeping on the floor. Might do away with my bed when I get home.

Does touring help you think of material for new songs or are you just focused on perfecting the set you have?

I think the barrage of new experiences on tour, and the thoughts that spin through your head while you watch the country roll by in a van sink in and come out in songs down the line. In the moment however, we are focused on the songs we are playing each night to audiences. We have a converter in the van where we can plug in this little ZT Lunch box amp and actually play songs while we are rolling down the highway. I play bass and Carl bangs out rhythms on the back of the seat with his sticks...we talk through song nuances and how the songs can get tightened up.

Why do you think it's important to tour? It's such a great sacrifice to get out on the road.

It's important to have the face to face connection with people. We write these songs and are hidden away in rehearsal spaces and recording studios crafting them in isolation and tour allows us to directly commune with the listener. I think that's an important part of the creative cycle. The music can hit people in one way while they play it in their cars or listen in on headphones but I think it hits so much deeper when the audience can see us having conniption fits /exercising demons while we play the songs live. For the band it's important to tour, because playing night after night brings out a magic in the delivery of the music, a telepathy between the players that is basically the why we even play music.

What was the best thing you learned from Andy Johns, whether about song construction or just from the experience in general?

We learned it was OK to put our creative guard down for a second. Swayback has always been very weary of outside influences. We've always had a circle-the-wagons and keep-the-squares-out-of-our-art mentality but that changed with Andy.

When we realized that he was as truly invested in creating these songs with us, we let him in to our creative process. He basically became a fifth member then and brought all these rich ideas about structure, delivery and vibe that opened the songs up and morphed them into something that was greater than what the band alone could have produced.

Do you agree that your music has gotten more melodic and less straight-ahead bashing rock & roll over the last ten years, or do you see it differently?

I would agree with that. We've never put any limitations or hardline direction of what this band should sound like and have always been really open to letting our sound change in whatever ways that came naturally to us. We were definitely some hyper punks when we first started. We were listening to The Stooges, Murder City Devils and the Melvins and it came out in the music. Now I've been listening to stuff all over the map from like Talking Heads, Stone Roses, The Smiths, Kurt Vile, War On Drugs to Westside Connection and Flying Lotus to Elmore James and Robert Johnson...it's all seeping in and the melodic side of the band has opened up as result.

How do you approach a show where you're playing a city or a room for the first time differently from the way might approach one where you're very familiar with the people/surroundings?

I think it's the same whenever we play regardless of locale. We go wild and let the spirit take us and hope that inspires the audience to get loose and get lost in the music with us.