Madonna at the Scottrade Center, 11/1/12: Review, Photos and Setlist

Madonna is considered a living legend, a cultural icon and one of the best performers of her time. She is one of the most influential artists in the history of American music, and last night at the Scottrade Center we found out why: hard work and natural charisma.

If we are to believe any of the personality flaws that we've been fed about her character, she needs and wants to be the center of attention at all times. This quality may be the most distinctive trait of a pop star, and Madonna is inarguably the biggest pop star in the world. The death of Michael Jackson left no doubt as to who holds the crown. Major stadium stars like Bruce Springsteen and Prince might be worthy competition, but Madonna is the queen. 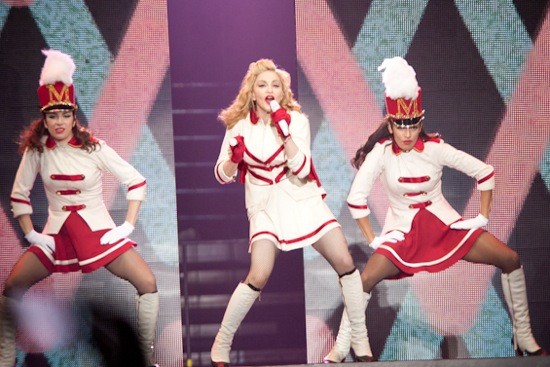 Opening act Paul Oakenfold was a fairly decent selection to warm up the crowd. He played gently electrified versions of the Killers' "Mr. Brightside," Rolling Stones' "Satisfaction," Eurythmics' "Sweet Dreams," Red Hot Chili Peppers' "Otherside" and no less than three Rihanna songs. Basically, it was uninspiring, but it worked. It sounded like the ignorable sub-par electro played at any club on the weekend.

At this point, Oakenfold is more of an EDM elder than an active, groundbreaking member of the culture, but he still threw in a bit of DJ Darude's "Sandstorm" for the clubbers in attendance. Like most popular DJs at larger events, he didn't seem to be doing much of anything up there behind his massive LED console. There was a camera above him the whole time, but, tellingly, the only time it showed his otherwise-hidden hands was at the very end when he slid the volume controls down.

A Madonna concert is more than just music, it's the live presentation of her art, and her art is her self. There is just no easy way to accurately present all of her many looks, phases and musical explorations into one hour-and-a-half-long set.

She tackles this dilemma by breaking up the show into a few different sections, all of which present different moods, attitudes, types of music and, honey, costumes. She is now three decades into an inconceivably huge international music career, and it would be impossible (and exhausting) for her to play all of the songs that her fans would like to hear.

There is a difficulty that needs to be addressed when attempting to compartmentalize such a long, diverse list of options. This problem was solved through referencing other hit songs during the performance. For example, "Hung Up" contained sprinklings of both "Papa Don't Preach" and "Live to Tell." And during "Express Yourself," Miss Madge even took a well-earned swipe at Lady Gaga by seamlessly sliding a few lines of Gaga's ripoff hit, "Born This Way" into the middle of the song.

Never one to hint at a topic or embrace subtlety, Madonna takes the direct approach in life and in concert. She's a very literal performer, actually walking an onstage tightrope to illustrate a tense emotion, grabbing her own lady bits when singing about sex, crawling on the floor to mime distress and doing a convincing acting job in a few storytelling scenarios. (Especially during the performance of "Love Spent," a stand-out track on her new MDNA album.)

Under Madonna's lights, everything is fluid. The stage floor morphs into a raised platform, dancers flow into a human staircase and the lady of the night changes both her outfit, hair and mood with ease. She began the evening as some sort of dark-sided Illuminati cult leader before changing into a violent Bond girl, a woman seeking religious guidance, the leader of a marching band, a star of Andy Warhol's Factory scene, a Maharishi Mahesh Yogi-following sitar-lover, a cutesy party hostess and then some sort of future disco druid from outer space, with a little dominatrix vibe spiking here and there.

If she has any constant, it's that she's always changing. This is true of all of her explorations, but Madonna still has quite a few signature scenes and looks. But because she's been around for so long, everything about her is familiar. From her distinctive eyebrows to the sharp peaks on her top lip to her well-muscled thighs to her dancing style and mannerisms, we feel like we might already know it all, but then she still finds ways to make both the songs and her looks feel fresh. It's all still very Madonna, but she always mixes up her style. She keeps older songs interesting by performing them in new ways, like when she sang a slowed down, nearly solo macabre version of "Like a Virgin."

Even with all of this thought and effort and professionalism, a few spots did drag on a bit. "Human Nature" needed more hip-hop sound effects (like on the album version), and "Masterpiece" was by far the lowest energy point of the night. Still, any tiny missteps were more than made up for by the time the show ended. "Like a Prayer" alone was worth any exorbitant ticket price. All of her dancers were out on the stage on a riser-like structure, dressed in robes and swaying and clapping like a gospel choir, with Lady Madonna as the preacher. Can I get an amen?

CROWD: There seemed to be a bunch of older ladies having sort-of Moms' Night Out. There were also craptons of ladies dressed as various Madonna eras, with '80s crinoline skirts proving especially popular. Lots and lots of left-over Halloween costumes.

FAMILY: Madonna's son, Rocco, acted as a junior backup dancer, joining her onstage for a few songs and even busting out his own break-dance solo.

PROBLEM: During "I'm a Sinner," both Madonna's earpiece and microphone were giving her issues. She stopped the song and waited for replacements before starting the song over, but not before asking forgiveness from the audience and evoking sympathy from those in attendance when she playfully grumbled, "This is my worst nightmare."

HOTNESS: Taking into consideration the fact that Madonna is a woman who has partially built her career on her body and her sexuality, I don't think it's out of line to mention that she looked amazing. She's prettier and somehow more charming in the flesh, and her tight, midriff-bearing costumes left no doubt that her body is still bangin'. Yowza. But it's insane to watch her and realize that she is a real person. She is so small when you see her in person, it's hard to wrap your head around the fact that this one tiny person has been so influential.

DIVA: When Madonna spied a few small partial sections of fans sitting in their seats during her show, she called them out. She wanted everybody to get up and dance and nicely (but firmly) shamed them until they complied. ("You are not allowed to sit in the motherfucking chair.")

SETLIST: Girl Gone Wild Revolver   Gang Bang   Papa Don't Preach   Hung Up I Don't Give A   Express Yourself Give Me All Your Luvin'   Turning Up the Hits Turn Up the Radio   Open Your Heart Masterpiece Vogue   Candy Shop Human Nature Like a Virgin Love Spent I'm Addicted   I'm a Sinner Like a Prayer   Celebration