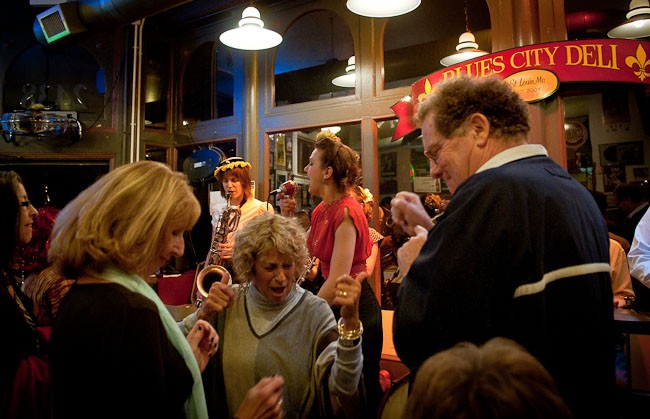 If you want a seat, you damn-well better get here early. John Schalk knows that. He's been coming for seven years and is one of the many regulars who flock to Blues City Deli on Thursday evenings for free rations of blues music.

Miss Jubilee and The Humdingers started at 6 o'clock, sharp, and Schalk (like "chalk," but with an 's' in front) walked in late. Now, he's standing in the back left corner of the deli, spooning bread pudding out of a bowl on a six-inch open corner of counter-space. He peers toward the stage between bites, but there are about ten people between him and the low stage.

A better seat, like the front-row stool Gil Cloyd snagged, requires some foresight. He says he got here at 4:30, then points to another grey-haired regular sitting in a stage-side booth. That guy arrived at 3:00--three hours before the show started.

Reporting here is like interviewing DIY punks about squat show-spaces. Everybody is paranoid about their spot blowing up. They don't want to have to get here any earlier than they already do. If you want to know about it, don't ask a punk, ask a retired or middle-aged blues freak. (Or, just check the Blues City Deli website, they post all the shows on the calendar.)

Not too put too fine a point on it, this is a deli--a restaurant that serves (fantastic) sandwiches and chips and tonight, $2 Schlafly bottles -- not a full-time music venue. Yet, this room, twelve-foot ceilings and walls collaged with posters and paintings of local and national blues heroes alongside family portraits and relics of St. Louis history, consistently hosts some of the best blues artists to grace our city's stages.

Tonight, isn't half bad either. "I like her more than I thought I would," says Cloyd. "I saw Pokey LaFarge [and the South City Three], and I think I was the only one in the room who didn't love it."

The comparison is reasonable. Both acts draft their songbooks, sense of swagger and taste in hats from the early half of last century, but the Humdingers lean more towards the Hot Jazz and Swing of the '20s and '30s and black Rhythm & Blues of the '30s-'50s, than minstrel-show jug-band tunes.

Miss Jublilee fronts the six-piece band with unlimited stamina for her Transatlantic-entertainer stage-smile while drummer Dan Connor directs the band through arrangements by the Oliver Sain Orchestra, Katherine Baker and Ruth Brown. He calls out, "High register! High register during the solo! Yeah!" to Lawrence Welby as the bassist slides his left-handed walk farther up the fretboard to sonically make way for clarinetist and tenor saxophonist Chloe Feoranzo.

They forego the usual 7 o'clock set break and make sandwich orders from stage -- Delta Bayou on a kaiser roll, some of that bread pudding. The crowd swings, tight-quartered up front, claps in back and Miss Jubilee spins and shucks through the audience, tip jar overhead, before wrapping this set up and driving off to their next.

Vince Valenza, the owner, receives as big of an applause as any solo tonight (and damn, Feoranzo had a few). He's been running these free blues sessions from behind the register for nearly five years, but he tosses the recognition back to the audience. "The crowd here," he says. "It's almost like a team. You put the right band in here--they throw it to the crowd, they throw it right back--it's pretty cool."

It's hard to find a seat with a crowd like that. Gotta get there early. 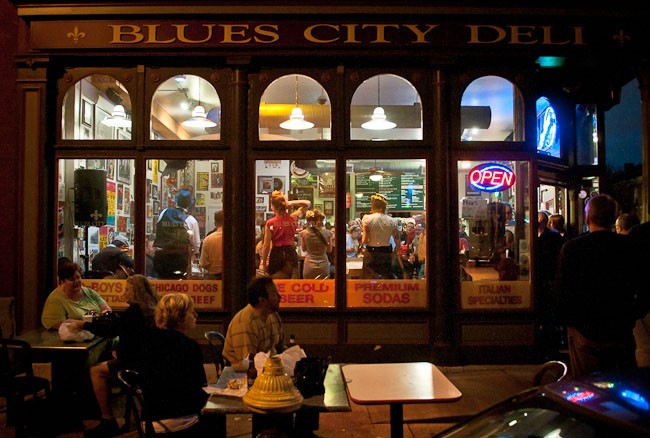