Sleigh Bells and AraabMuzik at the Pageant: The View From the Mosh Pit [PHOTOS] 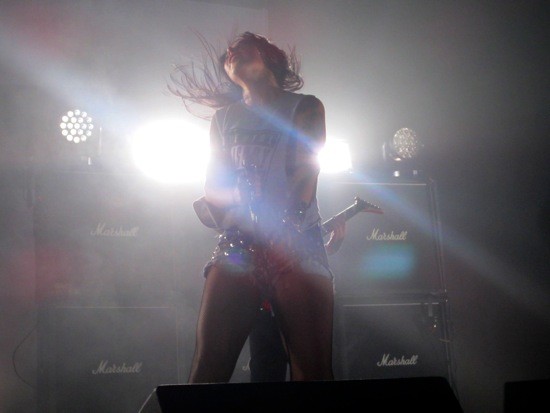 Yep, that's right, there was a mosh pit at the Pageant last night during the Sleigh Bells concert. To be fair: maybe the most sedate mosh pit I've ever seen. But I'd like to think at least one person left with bruises and I know I went home covered in a diverse sweat cocktail -- including some from Volcanoes' Eric Peters, who generally took better photos with his iPhone than I did with my point-and-shoot. Decide for yourself:

See also: -Crotching Whiskey at the Justin Bieber Concert and Getting Thrown Out: A Review -The 15 most ridiculous band promo photos -Slideshow: Sleigh Bells at the Firebird 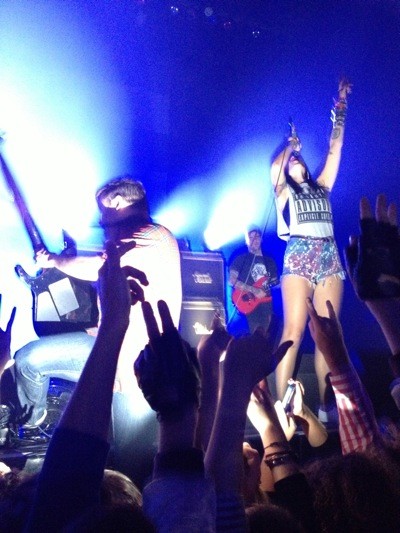 There really shouldn't have been a mosh pit at the Sleigh Bells/AraabMuzik show. Sleigh Bells is a band with a very broad appeal at this point; broad enough that it is playing the Pageant. That usually means too much wariness between strangers for much communal dancing. And that's to say nothing of the music itself -- for all the muscular posturing of Sleigh Bells, it is dance beats and a profound love of thirty year old, stadium-sized riffs. But the show is more fun than the music, mostly to the credit of Alexis Krauss, who fronts this thing like she's having a seizure, grinning, flailing and generally commanding the room so effectively she could sign everyone there up for a cult right on the spot. The light show matched; I stopped caring about using my flash halfway through when I realized no one would possibly notice. 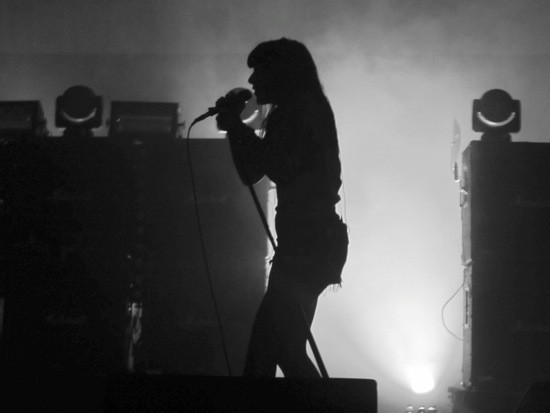 The ragers were much more fun live, obviously. The first album, Treats, was much more explosive and frantic than this year's Reign of Terror and therefore the old stuff was a better time live, at least if you were down in front. Songs like "Rill Rill," which sound great coming out of car speakers at unspeakable decibles, played sort of like the slow-dance at homecoming, which was boring. Below: AraabMuzik got equal billing here, but the crowd did not come for him. When he started there were probably three hundred people in the place, which feels pretty vacant in a room the size of the Pageant. It filled up as the night progressed, but not by a ton. Meanwhile, AraabMuzik can play the absolute hell out of an MPC.

One last note: Even though all those Marshalls are for show (otherwise we'd all be bleeding out the ears this morning), Sleigh Bells is basically designed to peg whatever system its coming out of. There have been widespread reports of sound failure at these shows. Not last night; the Pageant sounded perfect the entire time.