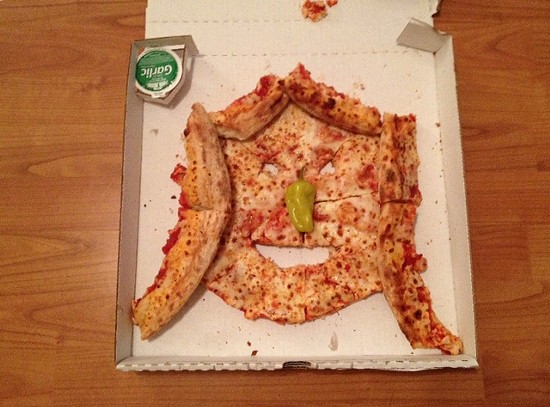 When I found out that Taylor Swift's new album, Red, would be available via Papa John's Pizza delivery, I pretty much had the same thoughts that I had upon hearing the first single off of Red: The fuck? Followed by: Mmmm. Tasty.

Modern record labels are working hard to find new ways to get the product to a paying audience. From free promotional downloads to bonus gifts to direct crowd-sourcing, there are many inventive ways to advertise and distribute new albums.

Nobody wants CDs anymore, they want exclusives and some kind of novelty factor. Swift's freaky-smart management recognizes this and promoted accordingly. In addition to the Pizza Party plan, this album is offered up in multiple formats by many different vendors. Four singles were digitally released in advance of the album, with some setting download records. The version of Red sold at Target includes six bonus tracks and a different cover photo. (This model also served well for Swift's last album, Speak Now.) And even Walgreens is in on the action, selling everything from Taylor Swift notebooks to branded guitar picks, and all of this is available 24 hours a day.

And while I celebrate every hustler, this pizza thing has gone beyond slick and into just... weird. Still, I decided to play along. I called up my local Papa John's to get the details and place my order. My Papa John's worker, Melanie, seemed more than a little confused by the whole thing. She said that I was only the second person to order the Swift pizza/CD combo from her location.

When my driver arrived, I tipped him well and asked him a few questions about delivering the CD. In broken English he said, "Oh, yes, I deliver all the time! Everybody love it!" I'm not sure who to believe, but I think that he thought that I was flirting with him.

I brought the pizza inside to my waiting friends, and we got right to it. They gave me two pizzas even though I only ordered one, so we thought our party was on. As it turns out, Papa John's pizza is kind of disgusting. Still, we chewed and we listened, making quick judgements on each song as my underused CD player kept stalling and threatening to skip. 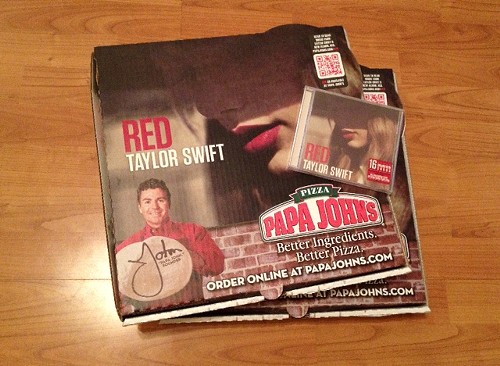 Overall, the album is a lot like the pizza: cheesy, a little too sweet, and then unexpectedly saucy. I'd heard all of the pre-released singles, but the album as a whole was still a surprise. We were one-third of the way through the sixteen-song album before we heard anything that sounded even remotely country. Swift does seem to be expanding her sound, but not her topics. It's all love, love, love, but I'm not sure why I expect something else from her, even at this point. What do I want her to do now? Write a political song? No. Hell, no. I don't know. I just want her to be more subtle, I think, but it's all right there.

The song styles and artwork are both varied to the point of schizophrenic, so the long album stays interesting. The pictures inside the booklet all look straight out of an Anthropologie catalog, and each song has a different photo of Swift to accompany the mood. The lyrics are all there, too, but with (annoying) seemingly-random letters capitalized. I'm sure the Letters contAin some kind of secret Message, but I can't be arsEd to decode it. In addition to the light twang she's known for, one song sounds like U2 ("State of Grace"), one song sounds like Jason Mraz ("Stay Stay Stay") and yet another sounds just like a dreamy Mazzy Star tune ("Sad Beautiful Tragic").

Like all Swift albums, I have my both my instant favorites ("We Are Never Ever Getting Back Together") and songs that I immediately dislike ("The Last Time"). Still, the magic of Taylor Swift usually prevails, and even the songs that I'm not into always seem to grow on me after repeated listens. But do you know what I won't be repeating? Eating a freakin' Papa John's pizza. Gross. Papa John's, we are never ever getting back together. Like, ever.