The St. Louis Soundtrack of Laumeier Sculpture Park: Review of the Site/Sound Exhibit 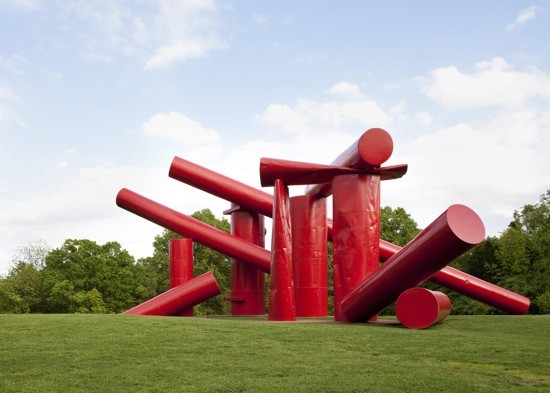 In a year when local bands have formed new partnerships or reconstituted old ones through DIY festivals, home-grown record labels and subscription seven-inch series, the sheer scope of Eric Hall's Site/Sound project demands respect. For the past year, experimental instrumentalist Hall has been in residence at Laumeier Sculpture Park in south county, and Site/Sound is the summit of well-directed risk-taking for both the artist and for the park. For the project, Hall recruited more than 70 local musicians and bands to write and record songs based on individual installations. Patrons are invited to experience the songs either from a park-provided iPod or through their smartphones' QR scanner. The cultural double-whammy of walking around that jewel of a park while listening to adventurous and challenging music is in itself an exercise in engaging a specific landscape while listening to new frontiers. (The free exhibit runs through October 21.)

See also: -Ryan Wasoba talks about what he got out of writing songs for Site/Sound -Eric Hall announces residency, concert at Laumeier Sculpture Park -Eric Hall: Live at Cromlech Glen

Sampling the mix on Hall's Bandcamp page is a kind of cheat; these songs are constructed in conversation with the installations at Laumeier and deserve that open-air experience that the project was designed around. But because Hall was nice enough to stream them for free (and because it would take the better part of a day to experience all the songs and sculptures in full), Site/Sound works as a stand-alone document. Even though most bands stay within their respective wheelhouses, the variety and shared sense of outré music-making results in a purposefully scattered and meandering program.

With 81 tracks collected, one can only take cursory swipes at the whole series. The Pat Sajak Assassins' "Flooded Chambers Maid" approaches its sculpture (a multicolored platform and bleachers that play with symmetry and shape) with a chromatic, tempo-shifting heaviness. Appropriately enough, CaveofswordS chose the stone grotto-like structure The Spring House, hidden in the park's wooded trails; the accompanying track is suitably airy, wordless and haunting. Kevin Harris takes the playful smiley-face earth-bound piece Face of the Earth #3 and turns it into a chopped-and-screwed exercise in robotic prurience. Spelling Bee takes the same sculpture and whips barbed wire around it. That two acts can take the same, seemingly straightforward work of art in such varying directions is proof enough of the larger project's success.