The Old 97's Return to 1997 at the Pageant: Time Tripping at the Genesis of Alt-Country 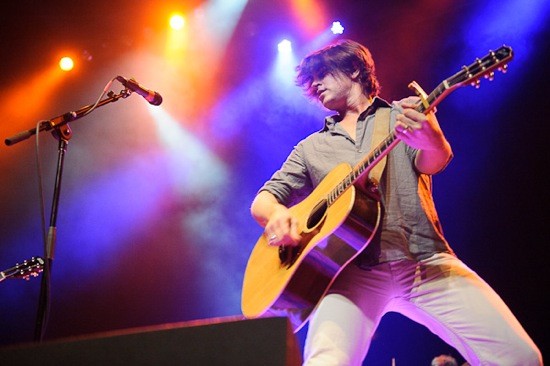 Music is a funny thing. Like photos or scent, songs have a way of making us remember the past. Late relatives. Swim class. That road trip to Dollywood with a jerk you never should have dated in the first place. Chances are good that, intentionally or not, you know exactly which tunes have accompanied your major and minor life events. Music is the glue that keeps all of this stuff together in your brain, ready to bounce around at the first note of a song you thought you had forgotten all about.

The Old 97s bounced St. Louis back to 1997 last night with a celebration of Too Far to Care, the album that helped legitimize and propel the burgeoning alt-country sound fifteen years ago. Performing the album in its entirety - and following that up with more recent tunes - the band reminded us where we were when we bought the record and where the country, the world and our lives were headed. Below, we've paired Too Far to Care songs with moments of significance from 1997, followed by a few notes on the show itself.

1. "Timebomb" - "I got a timebomb, in my mind, Mom. I hear it ticking, but I don't know why." Andrew Cunanan murderes five people, including iconic Italian fashion designer Gianni Versace. Cunanan later commits suicide with the gun he had used to kill his victims.

2. "Barrier Reef" - "Midnight came and midnight went, and I thought I was the President." Bill Clinton begins his second term as President of the United States, while Madeleine Albright is confirmed as the first female Secretary of State.

3. "Broadway" - "In a hotel room just off Times Square, they made a monster." Timothy McVeigh is sentenced to death for detonating a bomb in Oklahoma City in 1995. Killing nearly 170 people, it is the deadliest act of terrorism until Sept. 11, 2011.

4. "Salome" - "I'll find another lady, and you'll wreck another man." Madonna and personal trainer Carlos Leon call off their relationship, just a few months after their daughter Lourdes is born.

5. "W. TX Teardrops" - "And I cried so much it dug a rut they call the Rio Grande." The Oilers football team moves from Houston to Memphis. The team now is in Nashville and is called the Tennessee Titans.

6. "Melt Show" - "You showed me paradise." Titanic premieres late in the year, pushing the line, "I'm the king of the world!" onto audiences. The film goes on to win a number of Golden Globes and Academy Awards.

7. "Streets of Where I'm From" - "The streets of where I'm from are paved with hearts instead of gold." Diana, Princess of Wales, dies after a car accident in Paris. Her funeral at Westminster Abbey in London is watched on television by more than 2 billion people. [I was studying in Paris at the time and was struck by how the city grieved.]

8. "Big Brown Eyes" - "Now I can't get by without you and your big brown eyes." Steve Jobs returns to Apple after being absent from the company he founded since 1985. Jobs returned Apple to a profitable business instead of a near-bankrupt one.

10. "Curtain Calls" - "And even if you are the one, and even if the cards are all true, when the curtain calls, oh baby, what's a boy to do?" The Hale-Bopp comet approaches Earth and shines brighter than any star except Sirius. The comet with two tails inspires public interest primarily grown through Internet trackings, and the Heaven's Gate cult commits mass suicide to ascend to what they believe is an alien spaceship following the comet.

11. "Niteclub" - "Every night I'm broker than I was the night before." MCI Communications and WorldCom announce plans to merge, forming MCI WorldCom in a $37 billion merger, the largest in U.S. history.

12. "House that Used to Be" - "I might as well go on a talk show." Bobbi McCaughey gives birth to the first set of septuplets that survive infancy. Fertility drugs aided the conception of the babies, who are born nine weeks early.

13. "Four Leaf Clover" - "I got a four leaf clover, but I ain't got no hope of getting you." World Champion chess player Garry Kasparov loses a six-game rematch against an upgraded "Deep Blue" IBM computer, marking the first time a computer system beat a reigning world champion under standard chess tournament time controls.

Home base: During his opening solo set, Old 97s vocalist Rhett Miller welcomed St. Louis chanteuse Amy K. to the stage, who gave the crowd a spirited "Go Cardinals!" before performing "Fireflies" with Miller. She later took photos during the Old 97s set from the side of the stage

Greased lightning: The Travoltas began its set with vocalist/guitarist Salim Nourallah informing the audience, "We don't affiliate ourselves with Current John Travolta. Only 1978 John Travolta."

Talk, talk: Miller and the band performed most songs back to back, not leaving much time between for chatter. When Miller talked, though, it was memorable. "This is about a guy who's totally insane, and it's not me, I fucking swear," Miller said of "The Dance Class."

Ouch: Before playing "Niteclub," Miller namechecked a local music institution. "This next song might as well be about an old club we used to play at called Cicero's," Miller said. "I still have a scar from that metal beam."

Beatle Bob sighting: The local concert fixture enjoyed attention from a harem of older ladies begging for photos with him at the front of the stage.