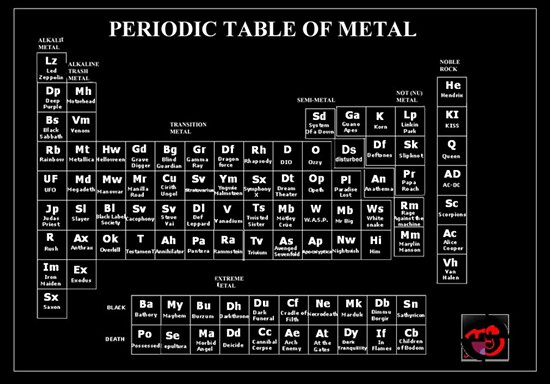 Songwriters love riffing on folklore, be it nursery rhymes or Biblical parables. Over the years, heavy metal has developed its own brand of legend, so much so that stylistically disparate musicians have used it as a springboard for creatively disparate songs. Here are the six best non-metal songs about heavy metal. Let us know your favorites in the comments below, but be aware that songs that simply mention metal in the title (ie. White Rabbits' "Heavy Metal," Califone's "Black Metal Valentine," and Less Than Jake's "All My Best Friends Are Metalheads") do not qualify for a position. Also, Lady Gaga's "Heavy Metal Lover" doesn't make the list either, but only because it is not very good.

6. Teenage Fanclub - "Metal Baby" Teenage Fanclub's Bandwagonesque is a minimally distorted, intentionally weak slacker rock album, and "weak" and "slacker" are the antithesis of metal. Slackers don't practice scales for 6 hours a day in order to shred. Teenage Fanclub's Norman Blake plays off of this dissonance on "Metal Baby." Blake details a failing relationship with a girl who takes him out of his comfort zone, making him "take her to the heavy metal show." The feeling is apparently mutual, as he is "not the kind of person she'll admit she knows," and she eventually jumps in a metal band's van and skips town. This song could have been "Punk Baby" or "Jazz Baby," as it uses a genre as a metaphor for the hipness that Blake admires but cannot relate to in his unnamed interest. Metal does seem like the best fit; the exaggerated characters of a hard rocking girl and an indie rock boy in "Metal Baby" make an excellent analogy for the cool/uncool dynamic of attracted opposites.

5. My Morning Jacket - "Holdin On To Black Metal" For My Morning Jacket, "Holdin' On To Black Metal" is about growing up, but the moral is unclear. When Jim James sings the opening couplet "It's a darkness you can't deny / But it don't belong in a grown up mind," he appears to be encouraging a metal fan to grow up and abandon the shallow negativity often associated with the music. But when he sings "Oh black metal you're so misunderstood" in the same tone of voice that could read as serious or sarcastic, he's pleading for the subject to not put those Burzum bootlegs on eBay just yet. Perhaps James is playing the devil's advocate one one shoulder and angel on the other, but it doesn't have to make sense. "Holdin' On To Black Metal" rules on vibe alone, which soulds like Neil Young-meets-Santana (but way better than that pairing would actually be). 4. Atom & His Package - "Hats Off To Halford" Atom & His Package was a solo artist who performed wacky songs with pre-programmed beats in the late 1990s. He was the early predecessor to Superfun Yeah Yeah Rocketship or Juiceboxxx, maybe even Dan Deacon. He often took on issues within the punk subculture, like on his pseudo-hit "Punk Rock Academy" and "Hats Off To Halford." Poking fun at homophobia in the metal scene, "Hats Off To Halford" praises Judas Priest's Rob Halford for coming out of the closet, and dreams of a day when metalheads sing the chorus of "I want to be / I want to be a homosexual." Atom goes for some low blows that discredit him a bit, calling metal dudes "evolutionarily one step behind," but he makes up for it with the following gems: "Statistics say chances of being gay are one in ten / That means there's a forty percent chance that one of the guys in Pantera likes men;" and "I'd love for everyone in metal to be homosexual / Only to make the Nazi pricks in Slayer a little uncomfortable." I take issue with his black and white viewpoint, but "Hats Off To Halford" has a point and is hilarious.

3. Wilco - "Heavy Metal Drummer" The guy who anonymously posts "Fuck off, Wasoba" on many of these Nitpick Six articles may point out that I previously ranked "Heavy Metal Drummer" the sixth worst song on great albums. It's not this track's fault for being surrounded by so many other flawless songs on Yankee Hotel Foxtrot; this is a fantastic song that should touch the heart of any St. Louisan who was around for the days of Mississippi Nights. Even those unfamiliar with local history can feel the nostalgia in "I sincerely miss the heavy metal bands / We used to go see on the Landing in the summer." Further references to double kick drums and Kiss covers paint a carefree past, lamenting the days before the weight of adulthood responsibility. As Jeff Tweedy repeats in the hook, "I miss the innocence I've known." Me too, Jeff. Me too.

2. Of Montreal - "A Sentence Of Sorts In Kongsvinger" Thanks to its confusing title, even dedicated Of Montreal fans may need to click play above to remember exactly which song "A Sentence Of Sorts In Kongsvinger" is, so here's the Cliff notes: It's the song on Hissing Fauna, Are You The Destroyer? about having a nervous breakdown while living in Norway, feeling the darkness of the black metal bands, but being too happy to be comfortable running around burning churches. Of all non-metal songs about metal, this one involves the most folklore, referencing the infamous activities of Norwegian black metal bands Burzum and Mayhem. But that is not necessary information for the enjoyment of "Kongsvinger," just as knowing who George Bataille or The Story Of The Eye is not essential to understanding Of Montreal's "The Past Is A Grotesque Animal." "Kongsvinger" is positive, it's danceable, it's gay in that Abba kind of way, and it emphasizes each of these aspects by contrasting with, but not putting down, black metal. 1. The Mountain Goats - "The Best Ever Death Metal Band In Denton"

Most fans of The Mountain Goats know that John Darnielle is an authority on metal. He wrote a 33 ⅓ book on Black Sabbath's Master Of Reality, he had Morbid Angel guitarist Erik Rutan produce tracks on 2011's All Eternals Deck album for no apparent reason, and his best song to date is "The Best Ever Death Metal Band In Denton." The opening track on 2002's All Hail West Texas, the last album in The Mountain Goats' Sony Walkman lo-fi phase, discusses Cyrus and Jeff, two friends who make up the best ever band because they mean it. Hard. Too hard, maybe, as Cyrus gets sent away to a disciplinary school for his "prominent use of a pentagram." When the pair become separated, it stings harder than any breakup song I can recall. Darnielle romanticizes the adolescent purity of metal much like Wilco's "Heavy Metal Drummer," but his take is more pointed. "When you punish a person for dreaming his dream / Don't expect him to thank or forgive you / The best ever death metal band out of Denton / Will in time both outpace and outlive you," Darnielle sings, and then closes out with a chant of "Hail Satan!" What's so beautiful about "The Best Ever Death Metal Band In Denton," is that by the time Darnielle is praising the devil, you have no suspicion that he means it. But Cyrus and Jeff mean it. Even if they don't actually pledge allegiance to the dark underlord, even if this is an empty gesture only done because they think that's what death metal bands are supposed to do, they mean it. Hard.