At game time for the second installment of the NLCS series, the Vegas betting line gave a slight edge to the Cardinals over the Giants. In the fine, you might say invisible, print, odds were even that Norah Jones would hold a crowd - not sold out, but not insulting - against the game, even as baseball matters took a turn for the worse, even as Jones took a turn on the electric guitar for a long rock rally that sounded a season away from the café torch songs that made her name.

Something was happening here, and you know what it is, don't you Ms. Jones?

What was happening was the latest chapter in the career of a talented, mercurial musician and singer and, most decisively, on-her-own songwriter, who has tried to buck the Starbucks and chaffed against the gazillion-selling jazzy pop of Come Away With Me. Every record and move and remix she's made - whether towards Americana on Feels Like Home or off-kilter pop of Not Too Late and Little Broken Hearts - has been to stave off the deadly Diana Krall-syndrome, in which jazz becomes the last thing jazz should ever be: smooth and predictable. And so she channels her jazz skills into rock music, hoping to find some edge. Norah Jones still has a voice like a pashmina evening shawl, but it's always been the creases and frays in her music that keep her fans rapt and returning.

A minute before 8 p.m. the lights snapped off, the house went to pitch and Cory Chisel and Adriel Harris walked out for a generous 40-minute set of original songs and one Tom Waits cover (the smartly-chosen Closing Time tune "Rosie") that seduced patrons who had no idea who the hell they were seeing. "Who are you?" someone yelled out mid-set. "Find me at the merch table and I'll tell you," Chisel shot back. With a black fedora and leather blazer, the lanky Chisel cut the figure of a serious but not severe singer-songwriter - a "poor man's Ryan Adams" according to a nearby critic - a guy who has some understanding of the craft but who settles for the first, maybe second cliché at hand. The lightweight material mattered not to the crowd, who welcomed his bold, fetching tenor and even more fetching harmonies - sometimes delivered lip to lip at a single mic - from Harris. Closing clap-a-long "Over Jordan" punctuated a confident, ultimately charming set.

A snap poll of press row suggested that I'm in the minority when it comes to the album that occasioned Jones' latest tour. One day, I'm sure, the Danger Mouse-produced Little Broken Hearts may be ranked the greatest indie-rock record ever made, if only because it features a real singer. But Jones wasn't quite ready to go there with her line check, opening instead with a nod to her debut album and the Ray Charles playbook: a swinging take on Hank Williams' "Cold Cold Heart," with the singer seated at the piano beneath a low-hanging flock of origami cranes. Guitarist Jason Roberts skanked about awkwardly, and the sound approximated country jazz ska, but delivered just slow enough that Jones' contra alto could get down to heart-melting business. She lingered at the piano for "What Am I to You?," which took her down the too-infrequent country-soul path, with her young band - featuring Josh Lattanzi on bass, Pete Remm on organ and Greg Wieczorek on drums - following her neatly and modestly, tight but not slavish, just backing her without alienating anyone from that voice. 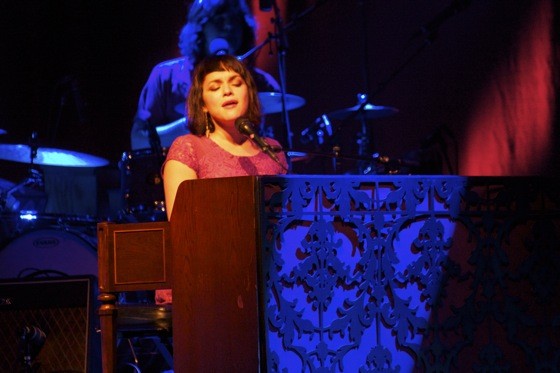 As the set moved into the Little Broken Hearts material, the band became more central to the music and more detrimental to the singer and her mission. The dudes half-marched, half-plodded through the title track's suicidal ideation and then just wiped its collective feet on the doormat of "She's 22." Jones did what she could to translate the surely genuine, through-the-ringer emotions of these songs, letting out long coos and savoring her own bittersweet breathiness, only her band just hung back, neither lifting the coy pop of "Say Goodbye" - with one of Jones' best couplets "It ain't easy to stay in love, if you can't tell a lie / So I'll just take a bow and say good-bye" - nor brimming to the full, poison-laced cup of "Take It Back." As tall as the order might be, Jones' brooding rock songs need arrangements as nimble and provocative as those provided by Danger Mouse - and this outfit rarely sounded up to the task.

"After the Fall" recovered a bit of tension only to slide back into "It's Gonna Be," one of Jones' worst attempts at social commentary - "Now that everyone's a critic it's making my mascara runny" - and a further reminder that a rock band playing rock songs should, at some point, actually rock. "Creepin' In" snuck in some fleet country swing and the Carmichael/Washington standard "The Nearness of You" glowed in the dark, with a nifty Joplinesque piano solo from Jones. The election-season novelty "My Dear Country" brightened the mood again but segued weirdly into "Don't Know Why," still one of the sexiest songs in any language - and especially so with Jones' solo voice over her solo piano, both just moist enough to remind everyone why they'd come - pun intended as Jones originally intended it.

Saint Gram's "Hickory Wind" ended the main set, with Chisel and Harris joining in and lending the choruses a lovely, rich billow. For the encore, Jones led her band around a single mic for unplugged, accordion-hued takes on "Sunrise" and "Come Away With Me" - two beautiful codas but also precise conclusions to the cognitive dissonance of Jones' current story.

Overheard: "We don't have a name for the band yet," Jones said, turning to all the young dudes on stage. "I was thinking 'The Arches' but that sounds too much like 'The Archies.'" It does, and it's not half as accurate as "The Luckiest Motherfuckers Ever."

Witnessed: On their way to the Peabody, couples from the County - you can tell by their pleats and heels - blithely crossed parks at an hour at which crank heads wouldn't be caught dead. Props, however, for getting to the show on time.

Encore:
Sunrise
Come Away With Me