A Space Song Countdown in Honor of Felix Baumgartner's Jump

Where were you Sunday, October 14? Like seven million of my closest Internet friends, I was watching Felix Baumgartner's historic parachute dive online and chatting about the #livejump on Twitter.

An Austrian skydiver, Baumgartner partnered with Red Bull for his "Mission to the Edge of Space," attempting to perform the highest altitude jump, man the highest balloon flight and become the first parachutist to break the sound barrier. Teams are still confirming official information from Baumgartner's computerized chest pack, but the unofficial word is that Baumgartner has succeeded in setting a few new world records.

11. Modest Mouse, "Space Travel is Boring" "She's the only rocketeer in the whole damn place."

9. Muse, "Supermassive Black Hole" "And the superstars sucked into the supermassive." 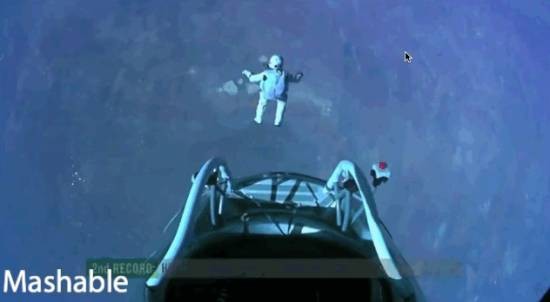 4. Radiohead, "Subterranean Homesick Alien" "I'd show them the stars and the meaning of life."

3. Queen, "Flash" "Seemingly, there is no reason for these extraordinary intergalactical upsets."

1. Europe, "The Final Countdown" "With so many light years to go and things to be found."