The Ten Best Shows In St. Louis This Weekend: October 12 to 14 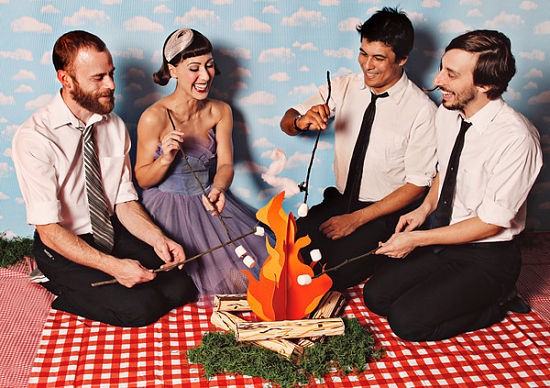 Nelly's recent run-in with the law is the talk of the town / office / internet today -- if you've been under a rock, check out what I'm referring to here. Anyway, my question is simple: When the hell are touring musicians going to stop trying to drive through Sierra Blanca? They nabbed Nelly, Fiona, Snoop Dogg, Willie Nelson....I swear that city's entire revenue has to be based on celebrity drug arrests.

A plea to the officials of Sierra Blanca: Don't you know that musicians need drugs to ply their craft? Society has essentially given them a pass for decades! The road is hard, and the occasional mind-altering substance or two can provide much-needed relief for the road-weary.

Now I know what you're going to say. You're going to allege that 36 bags of heroin and 10 pounds of pot is more than is necessary for one artist. What you are not considering is that there were six other people on that tour bus too! So that's only like, what, 5 bags of heroin per person? With one left over to share with a friend! And ten pounds of pot? Who doesn't purchase their weed by the duffel-bag-full? Gotta get that break on quantity, man. And again, that's split between seven people, so it's not even really that much. Jeez. I mean seriously, lighten up Sierra Blanca! Squaresville.

Oh shit, I almost forgot this is a weekend shows post -- that half pound of weed I smoked before work earlier today must be getting to me. Hey everybody, there are shows this weekend! Check out our picks below.

Psychedelic Furs @ The Pageant w/ The Lemonheads 8:00 p.m. | $27.50-$30 This is an odd pairing, but if there is one thing the Lemonheads and the Furs do have in common it is the ability to create forward-thinking, damn catchy music. The Lemonheads set also includes indie songstress Juliana Hatfield on bass. (DH)

Future @ Ambassador 8:00 p.m | $35-$55 Future was named on XXL's "Freshman List" early this year, and has since proven he has the chops to back up the honor, releasing tracks collaborating with heavyweights like R. Kelly, Snoop Dogg and T.I.. (DH)

Stuart Davis @ Foam Coffee & Beer 9:00 p.m. | Free Stuart Davis, the "Punk Monk" splits his time between being a prolific singer-songwriter and a for-real-ass-no-shit Buddhist Monk. I suspect that he will perform this show while levitating in a cross-legged position, but maybe I'm getting my hopes too high. (DH)

Ssion @ The Firebird w/ House of Ladosha 8:00 p.m. | $12 However you pronounce it, vocalist Cody Critcheloe has quite the strange musical animal in Ssion; its extravagant live show is not to be missed. (DH)

Bunnygrunt @ Mangia Italiano w/ Horsey Drawers 10:00 p.m. | Free It's Bunnygrunt Matt's birthday show, and maybe that other band is a thing you should see while you have the chance...(KM)

White Rabbits @ Off Broadway 8:00 p.m. | $13-$17 White Rabbits makes its first St. Louis appearance since a lineup shift, and back in the kind of venue these dudes butter their bread in. Trust me when I say this one will be a raucous good time. (KM)

Magic City @ Off Broadway w/ Jungle Fire 8:00 p.m. | $5 Magic City and Jungle Fire are slated to release a split ep together as part of Tower Groove's 45 series, and now here they are together in concert! Neat! Also, both bands kick all kinds of ass, so there's that too. (DH)

My Life with the Thrill Kill Kult @ Old Rock House 8:00 p.m. | $18-$20 TKK has been churning out its brand of industrial rock for 35 years now, consistently releasing records throughout. (DH)