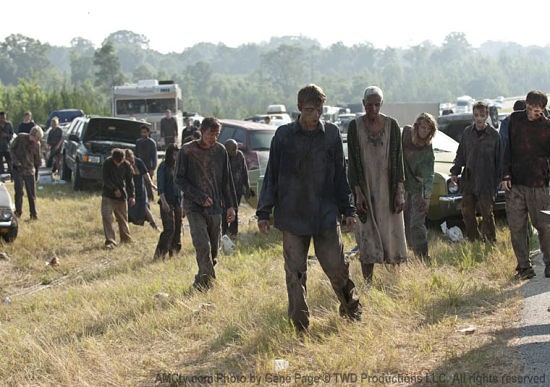 I'm rereading the first 40 or so issues of The Walking Dead comics, since The Walking Dead TV show returns to AMC this Sunday, October 14. I'm super-psyched about the third season -- my friends are developing a drinking game around how many times Carl gets lost, and I'm more than ready to see Rick Grimes get even grimier.

See also: -Which Song will FOX Ruin During the MLB Playoffs This Year? -The Ten Worst Music Tattoos -On Safari at Bass Center VII

But I can't concentrate on reading about the zombie apocalypse with all this NOISE. Do you hear it? It's like deep snarling or something. Wait, now what was THAT? Did something fall over? What's slamming into the wall repeatedly? And what is all that blasted moaning? Ugh, I bet it's those two idiots next door bumping uglies again. Excuse me while I give them a piece of my mind.

[Update: We regret to inform you that our writer's last words were unwittingly literal. Also, zombies are smelly. Here - enjoy some awesome videos starring the undead while we barricade the doors.]

10. The Creepshow - "Zombies Ate Her Brain" Excuse us while we once again remember poor Allison.

9. The Misfits - "Scream" Dude, don't wear the band shirt in the video. Jeez.

8. Rob Zombie - "Living Dead Girl" This is likely the best thing to come from the The Crow franchise post-Brandon Lee.

7. Jonathan Coulton - "Re: Your Brains" It's not an official video, but the World of Warcraft zombies still are reasonable; they're not gonna eat your eyes.

6. Phantom Planet - "Big Brat" This video is totally making you hungry, isn't it?

4. Horrorpops - "Walk Like a Zombie" We couldn't find an official video, but we think this song is swell anyway.

3. Billy Idol - "Dancing with Myself" The undead acquired wall-crawling powers just for this video.

2. Blondie - "Mother" This whole video feels like it's set in the Bronze.

1. Michael Jackson - "Thriller" Finally. It's all you really wanted to see, right?