Nelly and Crew Busted in Texas with 36 Bags of Heroin, 10 Pounds of Weed and a Loaded Gun [Many Updates] 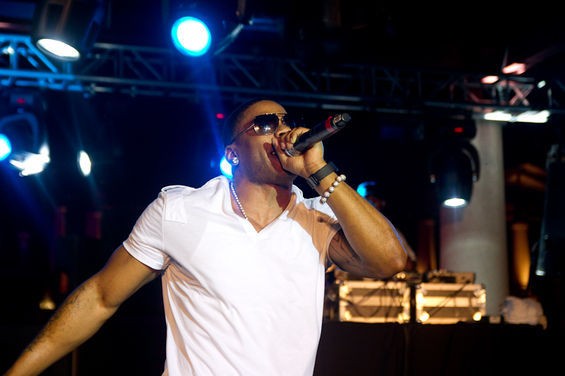 Update, 9:00 a.m.: We spoke with Jay E, producer of almost every song on Country Grammar and frequent Nelly collaborator. While he certainly isn't about to condone anyone's actions here, he is urging restraint. After all, none of us were there. He posted the following on his personal Facebook page yesterday afternoon and agreed to let us reprint it here: "For the people emailing, texting, and what nots about what info they got today. Please read... Maybe even read this twice...

Do not judge, or you too will be judged. For in the same way you judge others, you will be judged, and with the measure you use, it will be measured to you. - Matthew 7:1"

Update, 10/12: Nelly speaks: Via Twitter, obviously, since this is 2012. His take on his bodyguard's illegal substances, below.

Update, 3:15 p.m.: We've got calls and messages out to several people close to Nelly. So far there's been no response, but we'll let you know once we have something.

Update: We've got a statement from the Hudspeth County Sheriff's Office -- it's below.

Nelly took his tour bus through Sierra Blanca, Texas last night. Probably a nice little town to make a stop unless you are carrying a shitload of contraband. Which, as it turns out, Nelly's bus was: Specifically, 36 bags of heroin, ten pounds of weed and a loaded .45 caliber pistol.

See also: -Who is Brian Keith Jones? -Daily RFT's coverage of this arrest. -Here is Nelly Performing "Hot in Herre" with the Roots (Video) -Lessons I Learned from Nelly

I'm not gone front I'm MAD as Hell about this sh#t!!2have some1 who works 4u n who u call a friend 4 ova 10years jeopardize ur life WTF?

That being said he was not only an employee but he was fam some1 who protected my life 4many years!No excuses for wad he did!!!!

My heart goes out to his fam and is kids!!!!

Special Invite 2all Libra's to come out !!!

Sierra Blanca is a town with a population somewhere around 500, and really, tour buses of any kind should probably just stop driving through it. It's the place where just a couple weeks ago, Fiona Apple was busted for weed possession. Before that? Willie Nelson, Snoop Dogg and Armie Hammer. All in Sierra Blanca. That pretty much qualifies as a pattern.

Meanwhile, one of the people traveling with Nelly -- Brian Keith Jones -- has claimed responsibility for all the...luggage found on Nelly's tour bus. He has been arrested and everyone else was released. Again, more as we know it.

The statement from the Hudspeth County Sheriff's Office is on the next page.

On October 10, 2012 at approximately 8 pm. a 2007 Black Prevost Tour Bus that records later would reveal it belonged to Cornell Iral Haynes, a.k.a Nelly, who was onboard at the time, traveling eastbound on I-10 approached the U.S. Border Patrol Checkpoint located in Sierra Blanca, Texas. During a routine check of U.S. citizenship the inspecting Border Patrol agent, a canine detected the presence of concealed humans and/or controlled substances emitting from the seams of the main entrance of the vehicle and requested the driver to pull into the secondary inspection lane for further inspection. The agent requested all subjects to exit the bus so that a canine working the checkpoint could conduct an inspection of the vehicle. Upon entering the bus the canine alerted to a cardboard box. A further search produced a small plastic container containing marijuana, and (36) very small Ziploc bags containing Heroin and a loaded .45 cal pistol.

At that time all seven occupants of the vehicle were detained and read their Miranda Warning Rights. Upon further inspection of the canine alerted to an outside lower compartment of the vehicle--after accessing the compartment agents found a large green-duffle bag containing (9) vacuum sealed bags containing marijuana. (Total weight of the marijuana seized was 10.4 lbs and weight of the Heroin was a total of .64 ounces)

At that time Brian Keith Jones freely admitted that the controlled substances along with the weapon belonged to him and he was placed under arrest by U.S. Border Patrol agents and detained. The vehicle and all subjects except for Jones were released from the checkpoint and allowed to travel with no further incident. At approximately 9:30 p.m. the Hudspeth County Sheriff's Office was contacted and upon arrival, Mr. Jones was taken into custody and transported to the Hudspeth County jail and is currently awaiting a bond-hearing expected to take place later today or tomorrow.