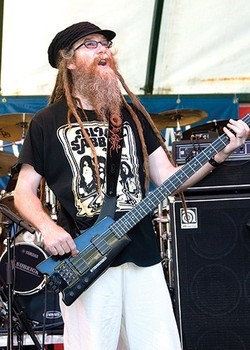 Update, 4:50 p.m.: Jimmy Tebeau has been sentenced to "30 months on one felony count of maintaining a drug-involved premises, fined $50,000, and ordered to serve 200 hours of community service. He has also agreed to forfeit to the United States approximately 350 acres in Shannon County, Missouri, known as Camp Zoe," according to a release by the United States Attorney's Office for the Eastern District of Missouri. That's the maximum sentence allowed by Tebeau's plea agreement. The full statement is below.

We were there last night: Jimmy Tebeau Was in High Spirits Playing Music the Night of His Sentencing

The investigation into Jimmy Tebeau's activities at his Camp Zoe began five years ago, and since then he's had his money and property seized (some of the former was eventually returned) and dealt with a litany of charges. For background on the ordeal, see our 2011 feature Shakedown Street.

Tebeau entered a guilty plea to charges of "maintaining a drug-involved premises" and faces up to 30 months in prison. His sentencing is at 2:30 p.m. today in Cape Girardeau (it's open to the public), and he'll be playing tonight with the Jerry Garcia Band at Old Rock House.

From the District Attorney's Office:

Cape Girardeau, MO - James Tebeau, 44, was sentenced to 30 months on one felony count of maintaining a drug-involved premises, fined $50,000, and ordered to serve 200 hours of community service. He has also agreed to forfeit to the United States approximately 350 acres in Shannon County, Missouri, known as Camp Zoe. Tebeau appeared before United States District Judge Stephen N. Limbaugh, Jr., this afternoon in Cape Girardeau. By special agreement, Tebeau will be allowed to appeal the sentence on grounds that the indictment and Tebeau's conduct did not allege and constitute a crime.

According to court documents, from 2004 until October 2010, Tebeau managed a campground consisting of approximately 350 acres known as Camp Zoe. Tebeau used Camp Zoe as a location to hold various weekend music festivals known as "Schwagstock" or "Spookstock" festivals. Those festivals would normally be held from April through October on a monthly basis, and would last for three days. He would arrange for various bands to come to Camp Zoe and Tebeau would also perform with his band, "The Schwag Band." Tebeau advertised these festivals in various publications, and was aware that the term "schwag" was a slang term for low-grade marijuana and he purposely adopted that name for his music festivals and band. Tebeau charged each person who attended a music festival $60 admission for entrance to Camp Zoe for the three day festival. Each person who paid admission had an armband placed on their wrist by a Camp Zoe employee. The number of people who attended each festival ranged from a low of 3,600 campers during April festivals to a high of nearly 8,000 campers for the festivals in May, for an average 5,000. The campers parked their vehicles in fields on Camp Zoe and camped in tents and small personal camping trailers. In August, 2006, the Missouri State Highway Patrol arrested two individuals who had been selling illegal mushrooms at Camp Zoe. In the ensuing investigation over the next four years, officers made over 150 undercover purchases of illegal drugs that included marijuana, psychedelic mushrooms, ecstacy, cocaine, LSD, MDMA, opium, moonshine liquor, and products such as homemade cookies and cakes containing hashish oil. Officers observed 100 to 200 drug sellers at each festival, and estimated that the total amount of illegal drugs sold in the camp during a typical Schwagstock festival was approximately $500,000 per event.

Tebeau admitted that he was responsible for the operation of the camp, and that he was aware of the drug use. Tebeau also admitted that he had instructed his employees that certain types of drugs were permissible in the campground, like marijuana, LSD and mushrooms, but other drugs were not permitted and they were instructed to eject persons who sold crack cocaine, methamphetamine, heroin or nitrous oxide gas. Tebeau himself did not participate in any drug sales nor did he receive any funds from the sale of any controlled substances.

Pursuant to the plea agreement, the parties agreed that the defendant's sentence should be 30 months imprisonment and that the defendant would forfeit Camp Zoe; the agreement also allowed Tebeau to appeal the District Court's denial of his Motion to Dismiss the Indictment. As part of that agreement, the government conceded that Tebeau himself did not have the intent to sell or use controlled substances; but Tebeau in turn admitted that he did intend to make Camp Zoe available to sellers and users of controlled substances.

United States Attorney Richard Callahan noted that while it was unusual to allow a defendant to appeal as part of a plea agreement, the unique circumstances in this case, i.e. the fact that the drug house statute was being applied to a concert venue, justified the exception.

Tebeau took to Facebook last night to thank supporters for their encouragement and invite them to both the sentencing and the show. His message is on the next page.

Tuesday of this week is a big day for me. It is the day I get sentenced in the Federal Court case pending against me involving Camp Zoe. I want to thank everyone for their continued support many of you have shown me over the last two years (especially my wife). "Yes, It Sure Has Been a Long Hard Climb." I also want to thank the many people who wrote character reference letters to the Judge. I really appreciate it. These letters were sent in last week and could potentially help. The hearing on Tuesday is at the Federal Building (555 Independence St.) in Cape Girardeau, MO. It is open to the public and starts at 2:30 p.m. in Hon. Judge Limbaugh's courtroom. Anyone attending should dress appropriately and be respectful of the court. I will still be performing that night with JGB (Jerry Garcia Band) at The Old Rock House in St. Louis.

The post has some 183 comments, and since then the outpouring of testimonials from fans and Camp Zoe alumnus has been pretty much ceaseless. We'll update you with the results of the sentencing when we have them, and we'll see you at the show tonight.