Thousands of Old Singles, Looking for Some Love: The 45 Room at Record Exchange 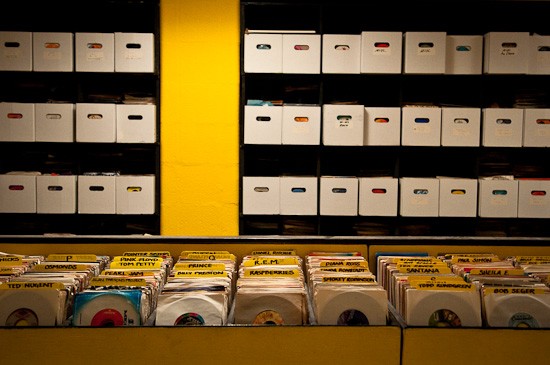 To enter, you must first pass the five cardboard Elvis cut-outs standing guard on the staircase. The 45 room at The Record Exchange is dim and long, like a South City shotgun-style house. It's three times lengthier than wide and smells like your grandpa's old suit-coat. In a room with a half million records, my fingers fall into the B's--Bo Diddley's "Ooh Baby."

I linger for two hours, thumbing through rows and racks of antiquated wax. In an era of ephemeral stars and viral YouTube hits, this roost of jukebox singles and b-sides is as much a museum as it is a salesroom. The collection is alphabetized and organized by genre, spanning '50s and '60s-era Rock & Roll to obscure Northern Soul, Country & Western to kiddie tunes.

If there's a singular strength of the 45, it's the medium's inherent ability to outlast its makers (artists, labels) and original listeners. It offers seemingly permanent documentation that, yes, this band, scene and performance existed. No doubt, that's part of its attraction to contemporary artists and labels.

Last month, Big Muddy Records released a seven-inch from the Hooten Hallers, the first in a series that will also feature 45-rpm releases by the Rum Drum Ramblers and Lonesome Cowboy Ryan. Tower Groove Records is offering a Singles Club for 2013, where subscribers will receive a seven-inch record each month featuring a pair of the label's bands. The series begins with a Demon Lover and Old Lights split in January.

However, don't expect to find many of those releases here, at least not for a while. Jean Haffner, owner of The Record Exchange, says he appreciates what the local labels are doing, but his store sells only second-hand items. You'll be hard-pressed to find anything pressed within the last decade here (though, oddly, I did spot a Kelly Clarkson "Miss Independent" single from 2003).

Haffner has a special fondness for 45s; he remembers buying the small format often as a kid, mainly because he couldn't afford LPs. Now he can. He founded the Record Exchange in 1977, and today, it's one of the largest used record stores in the country.

"I just sold 2.5 million two weeks ago" says Haffner, recalling a single sale of mostly 45s to someone from Detroit. "It took three eighteen-wheelers to get 'em. That's how many there were, and that didn't touch it." The storefront's overwhelming collection, displayed in a labyrinth of shelves and racks in the old Buder Library building, is just the tip of the iceberg; the majority of his records remain stored in a warehouse.

"This is a perfect browsing store because there's so much here," says Haffner. "You're best not to come here with a list because if you do you'll likely be disappointed, because I don't have everything. Nobody does. But, if you just come in here to browse you'll find something. Everyone does."

I pull down a white cardboard box labeled "St. Louis Artists" from the wall. Before St. Louis had Old Lights, it had the Gaslighters. The group cut a folky seven-inch in the '60s with Marlo Records in Belleville: "If You Don't Believe (You'll Never Fall In Love)" on one side and an original arrangement of "Bowlin' Green" (an OG folk standard if there ever was one) on the other.

Local bands break up, move on, and eventually stop playing, but their records still play, sometimes a half-century later.