Indian Blanket -- playing this Saturday at the Firebird with Swedish folk group First Aid Kit -- is the little-known brain child of St. Louis' Joe Andert. The band has spent much of its existence locked primarily in Andert's self-criticism and careful exploration. To date, the show calendar has been vanishingly sparse and the public documentation is a series of demos and one single. Not too many people have had the chance to fall for Indian Blanket, but the band does have one very high profile supporter in Klara Söderberg of FAK, who is a close friend of Andert's. She has been and will continue to be a frequent collaborator with the band.

They met a few years ago out of mutual respect for each other's music. Their first duet was a cover of Bob Dylan's "Boots of Spanish Leather," which Andert has allowed us to share with you -- it's on the final page of this interview. We also spoke with him about the roots of Indian Blanket and his hopes for this weekend's show.

Cassie Kohler: There isn't much information about Indian Blanket out there. Can you give our readers an idea of who you guys are and where you come from?

Joe Andert: Indian Blanket is myself, Jim Hughes, Alex Beaven and we just added cellist Katie Brown. I went to Columbia College in Chicago. I was studying film and poetry and Jim was studying music composition. We've been friends since high school, Alex too. We played with people there and it was called the Indian Blanket. As people dropped out of school and new people came in it was always called Indian Blanket. For the longest time, it was really just a name for this music that I put out. Now it's been a few years and Jim and Alex have been there the whole time. Indian Blanket is a more solid thing. It always been a folk-y, Americana thing.

So Indian Blanket is your musical vision and members kind of come and go?

To an extent, I think that was the case until recently. Now I think its definitely us [four], because it's definitely a group writing project. Everyone is so much on the same page, there is no do this or do that. Now, there is almost no reason to speak to the band. It's just easy and everyone has been playing together for so long that it's not the kind of thing we have to talk about.

Almost never does it hit me that I should book a show instead of writing songs. Making sure a bunch of people heard the music was never something that I really cared about and that's changed recently. The songs have gotten to a place where I want people to hear them. Also, we were playing with these two brothers but it didn't work out. They are killer musicians, but they weren't coming from the same direction. We had to completely start over and couldn't play a show for a while. In that time period, I went through this thing where I didn't even like the songs anymore, so we had to rewrite all of our stuff and come back to a place where we were comfortable.

Can you elaborate on not liking your on songs after some time?

They [the songs] aren't relevant anymore. If they aren't true to me anymore, singing about it, I can't be real about it. When you are singing something, I think you have to sing it like you mean it and that's how you get to someone. 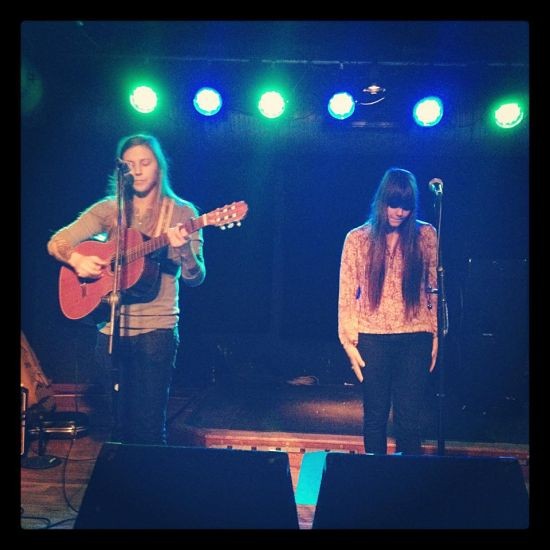 You wrote it though, so at one point it did feel true to you. What happens in this passing time?

Most of the things I write are based on true things or things that I am very fascinated with at the time. So let's say I wrote a song about regret in a relationship, but something new came into that relationship and I wrote a new song about it. It's almost like I have to choose between the two. I don't want to sing contradicting things. It feels weird. It's weird to sing about things that I don't really believe or think are true anymore, especially if it has a moral point of view.

That interesting. How does this affect your live show?

The set list is constantly changing -- I mean it almost completely swaps out. The exception is three songs that, for whatever reason, I've been consistently happy with for a long time.

What have you been writing about currently?

Recently, I've been trying to not write songs that are about women. I feel there is more to life than that kind of thing and it's egotistical to talk about those kinds of things in songs. Because of that I haven't been writing tender things. But I have been writing about a thing that's happened or an idea.

"War Song" is obviously not about a person. It's a song to war. Or we have song called "Backwards" about being in nature and feeling indifferent towards it and feeling guilty about not being overcome with awe. When it doesn't happen you feel like there is something wrong with you. I've been trying to write about things that are more thematic and less autobiographical. I think that vagueness is key to writing good lyrics. Not just in this ephemeral way, but not giving everything away. People can really apply it to themselves and that's the beauty of folk music.

Has folk always been your intended sound? Or did this just happen? Do you see yourself remaining in this place?

You know, when I first started writing songs I wanted to be Bob Dylan. I was even doing his vocal stuff. Have you ever read something that makes you feel so self-conscious about everything you've ever done and you feel like no matter what you will never achieve it and that you should never write again? That's how I felt about B ob Dylan. I knew I had to get better at writing. That feeling stopped happening when I stopped trying to emulate him so much. I just went with it and I'd catch a melody, even if it's not Americana-y, I just go with it. I don't find myself saying this isn't folk-y enough or this isn't an Indian Blanket song, I just let it go. So I guess it does have a way to evolve.

On Indian Blanket's Facebook page it says you are "all about collaboration." Can you explain that? Why do you enjoy collaborating?

I'm not able to make certain kinds of music, some things just aren't natural for me. So bringing in someone different lets us create something that neither of us could create alone. Being able to do that, you can't beat it. I think it's fascinating. I can put this music out there and put it together and then depending on who is on that stage with me or in the room, it's totally different and special. It's really interesting coming from the view of the singer/songwriter.

Do you have an examples of interesting collaborations?

You've collaborated with Klara Söderberg [of First Aid Kit] before.

She and I have been writing songs and singing together for years. We have a great relationship in that we can sit down in a room, write together, make a harmony together and encapsulate and complete a vibe. She's really good at that. She's been the person I've worked with the most outside of the band. She's like a chameleon; she can just get there.

How'd you two begin working together?

Three or four years ago a friend made me watch First Aid Kit's cover of "Tiger Mountain Peasant." So I added her on Facebook and as soon as I added her she messaged me. We were both into each other's stuff and like the same bands. For some reason we kept talking. So I said that I liked [Bob Dylan's] "Boots of Spanish Leather" and wanted to hear it as an actual duet. We recorded it by sending files back and forth -- it was cool. So we started do that kind of thing. So the stars kind of aligned, and we started making music together. We've been doing the same thing ever since. We'll probably play something together at the show.

Is there anything readers should know about the band?

We really try to write songs that people can sympathize with. And not sticking to a genre or tropes or trying to sound like someone else. We have really no idea how that's going to come out in St. Louis. I guess we are anxious to see how St. Louis accepts us. We are excited about the First Aid Kit show. We are really hoping that the show is a good chance for anyone who would want to hear us to hear us. It has been really hard for us to even get on a bill that fits us. So that's what we are more excited about: to play to an audience that will get it and to get their reaction. And find out if we are doing something that has any value. I think that's something every artist wonders.