Clap Your Hands Say Yeah Wants to Bond with You, Personally 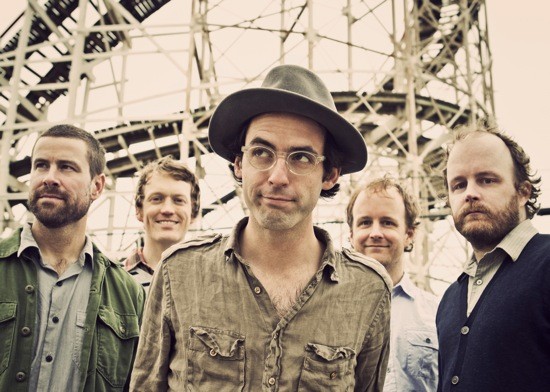 Clap Your Hands Say Yeah has had quite a year. Still riding high on 2011's release of Hysterical, the band has toured almost nonstop in 2012, had a few bandmates call it quits, recorded a video in an Australian drainpipe and visited South Africa. And even after all of that, CYHSY still wants to play our own Grovefest on Saturday, Oct. 6. We caught up with CYHSY vocalist Alec Ounsworth - waking him from a well-deserved nap in a van - as the band drove to Raleigh for a show.

Allison Babka: Clap Your Hands Say Yeah is known as being an Internet-driven band -- a lot of your initial success had come from bloggers and music forums touting your work. So thinking about all of that online love, where do you fall on the music piracy issue?

Alec Ounsworth: Oh, I don't know. I've kind of resigned myself to not take a stand on it anymore [laughs]. I don't do it [illegally downloading music], myself; I don't indulge. But kids will be kids [laughs]. I think it makes it a little more difficult for us, but we've got to find other ways to make things work. On the bright side, our music does get out there more than it would otherwise.

I think the only thing that bothers me is that people are missing the certain magic of "I'm getting a record." I still kind of enjoy that and get most of my stuff on vinyl. That's the whole idea of the package -- to provide a better connection with music. It's something to grab onto. But that's me; I'm old fashioned. The Internet didn't really come into fashion until the end of college for me. In my formative years, I never really had to consider that sort of thing.

How did you seek out music when you were younger?

I'd take recommendations from cool friends and go to a record store and try to find albums. Or I'd blindly go in and hear about some band called Bad Brains or Fishbone or Primus, you know? Then I'd go to one of their shows even without having heard them before.

What was the last album you bought?

I bought Bob Dylan's Tempest during this tour. I haven't bought too many records recently, but I have a fairly big record collection back home.

What makes a good pop song to you? What catches your ear?

That's a good question -- a really hard question. All sorts of stuff. I guess mainly... huh. That's really hard! I'm going everywhere in my head as to what I consider a good pop song, but I'm going all over the place right now. I go back to the standard great pop songs -- Smokey Robinson and the Miracles, that sort of stuff. I love it. As a little kid, I'd sing along as backing vocals. For example, [Robinson's] "The Tracks of My Tears," or Stevie Wonder had really spectacular songs over and over again. You can't put your finger on what makes a song works. You know when you know.

Do you have any guilty pleasures from today's music? Like, are you listening to "Call Me Maybe" and secretly loving it?

I guess that would be explicitly guilty [laughs]. I like a couple of Adele's songs. For someone like me who's kind of a record store geek and delves into weird esoteric shit all the time, to go to that is kind of a guilty pleasure.

Can you talk about the early days and what it was like to produce and promote a record when you're unsigned and doing it all yourself?

Yeah, it's about as difficult as you might imagine [laughs]. It's something that I don't know I want to entertain forever because there's a lot to it. At the end of the day, I wonder why I haven't done any music that day. I'm used to trying to work on music, but all of that [album production and promotion] sort of deprives you. I guess theoretically it's work, but it was all we knew. We didn't have any backing, so we just "bookered" it; we wanted to release a record and we did. After that, we decided that's probably what we should keep doing, but I don't know. It gets a little carried away, and I imagine we could probably use help down the line.

What makes a perfect, magical show for you?

For me, it's different now from it used to be. I'm really starting to recognize the power of the connection with the audience. I really think that if I can loosen up to the point of having a relationship with the audience, I could get more comfortable. [Laughs] I'm not exactly the most comfortable performer all the time, and the best shows are when you can kind of let everything drift away and perform the songs you've been performing for so long in a new way that only makes sense at that particular time. It has everything to do with making that connection.

Maybe it's from watching the Flaming Lips do what they do, having that forced engagement with the audience and having that sort of dialogue that I've really sort of started coming to terms with and appreciate that back and forth a lot more. We've been going out and meeting people after the shows, too - put a face and a name on the people you're playing for and who appreciate you. It's kind of necessary. Otherwise, it's some impersonal mess, and you don't really know who you're doing this for. There's got to be something more than that.

You're playing Grovefest here in St. Louis on Oct. 6. Many St. Louisans were surprised to get such a high-caliber band like Clap Your Hands Say Yeah for a neighborhood festival.

It popped up on our schedule, and we were happy to oblige. I'm serious about that! I'm looking forward to getting over there in any form. Just to play in St. Louis, it's a good thing.

We have that sort of thing [neighborhood festivals] in Philly. To have a community festival, it's like a treat and will break up the tour nicely. Grovefest sounds awesome! We love being able to get out and meet everybody we're playing for, and what better way than at a community festival?